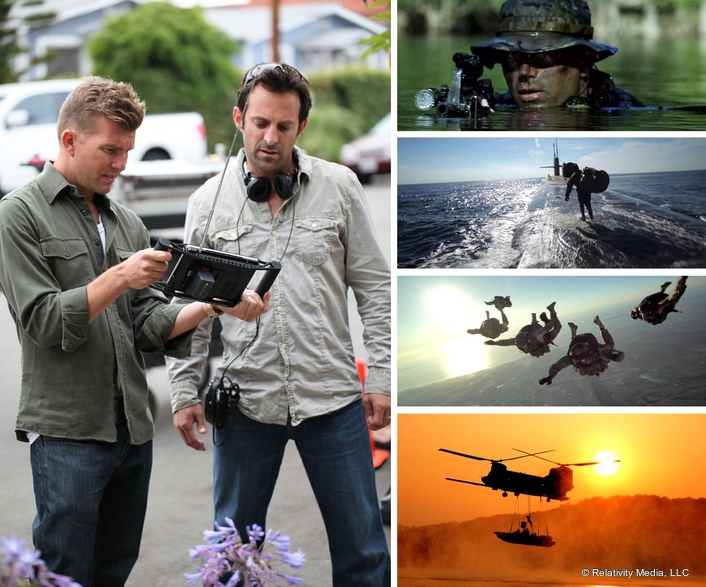 The movie was primarily filmed using Canon 5D MkIIs
Relativity Media and Bandito Brothers' Navy SEAL action-thriller Act of Valor, starring active-duty Navy SEALs, took the No. 1 spot in America in its debut weekend. The film was independently produced by Bandito Brothers, an outfit known for their inventive filmmaking process, enabled by leveraging tools and technology by companies like AJA Video Systems.

Produced and directed by former Baja 1000 champion Mike "Mouse" McCoy and former stuntman Scott Waugh, and written by Kurt Johnstad (300), Act of Valor features a gripping story that takes audiences on an edge-of-their-seat journey, when a mission to recover a kidnapped CIA operative unexpectedly results in the discovery of an imminent, terrifying global threat, an elite team of highly-trained Navy SEALs must immediately embark on a heart-stopping secret operation, the outcome of which will determine the fate of us all. Act of Valor combines stunning combat sequences, up-to-the-minute battlefield technology, and heart-pumping emotion for the ultimate action adventure film--showcasing the skills, training and tenacity of the greatest action heroes of them all: real Navy SEALs.

The movie was primarily filmed using Canon 5D MkIIs, with film transferred to HDCam-SR and rendered in Cineform. All of those source assets were combined into a single Adobe Premiere project based on an Avid EDL, and output as DPX files, and also laid-back directly off of the timeline using the AJA KONA card. Bandito Brothers used Adobe Premiere Pro to online Act of Valor with KONA cards to enable a 2K workflow. The team powers their theater using AJA hardware with 2K over SDI and embedded 5.1 audio--and also leverages AJA Io Express to run both Avid Media Composer and Adobe Premiere Pro from the same workstations, with files on the same partition, without having to swap out hardware.

"AJA offers the best real-time support for the variety of formats that we work with: Cineform, DPX and more," added Mike McCarthy, Director of Technology at Bandito Brothers.

Act of Valor marks the third film project produced by the partners behind Bandito Brothers, and follows the release of their two highly-acclaimed documentaries, Step Into Liquid and Dust to Glory.