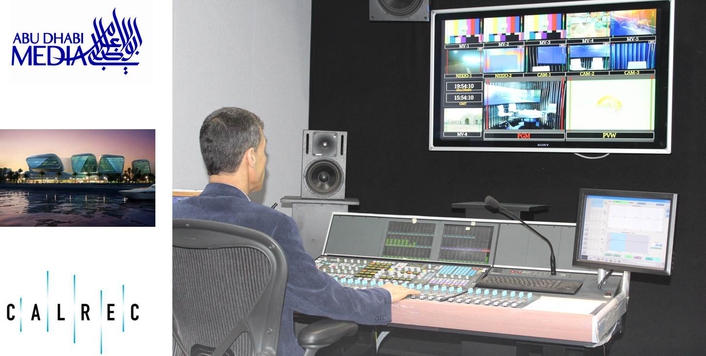 .
United Arab Emirates-based Abu Dhabi Media (ADM) has installed its fifth Calrec Omega digital audio console. The console was first used in August 2012 in ADM's London studio during the 2012 London Games and has since been moved to its Abu Dhabi studios for mixing audio during live sports news and sports programs.

"The mixer is designed for live TV broadcast and is one of the most reliable desks on the market with one of the fastest cold-start times available — which was an important requirement for us," said Abdul Farid Kabani, head of TV engineering and maintenance at ADM. "We used to have an analog audio mixer, so for audio embedded in SDI we needed to use an external de-embedder. The Omega provides that functionality as well as the ability to create multiple projects and load them instantaneously. The console is extremely reliable, with multiple backups as standard in critical areas like control and DSP."

The Omega console gives ADM the reliability and ease of operation it lacked with its old analog console, along with the ability to de-embed SDI embedded audio. It also met ADM's key criteria for a modular, expandable system that easily connects to ADM's other Omega desks via the facility's existing Calrec Hydra audio-routing network.

"ADM is an important source of news and entertainment programming in the Arab world, with a dedication to quality across the spectrum of broadcast and digital media," said Anthony Harrison, Middle East sales manager at Calrec. "ADM's addition of a fifth Omega console shows its continued commitment to Calrec and is a testament to our strong working relationship."