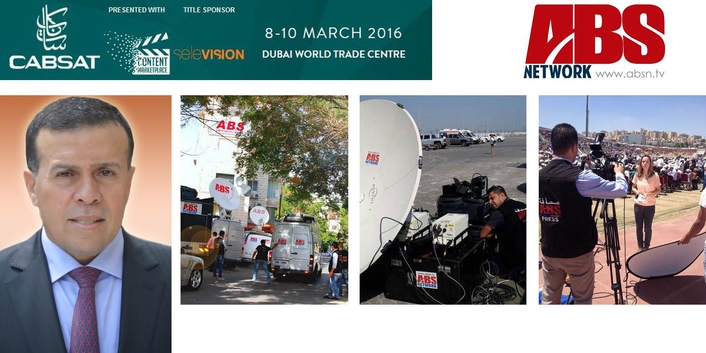 ABS Network, a leading Middle East and North Africa (MENA) provider of all broadcasting and production services, today announced its participation at the 22nd edition of CABSAT where it will host an impressive line-up of products and services.

Using the event’s vantage position as the number one platform for the broadcast industry in the region, ABS Network will exhibit its content production and delivery services, reinforced with the very latest in broadcasting skill and technology. “CABSAT is very important to our expanding business since it gathers important information about broadcasters, satellite and digital entertainment professionals and showcases the latest technologies that can help make our work better and more efficient,” says ABS Network Chairman, Mohammad Al Ajlouni. The company will detail its production process from filming with full HD to post-production and distribution, and also unveil its SNG Vans purpose-built from scratch and ready for on-site operations. The workings of these vehicles will be explained through in-depth video recordings. ABS will also showcase its product partnership with Telarity with whom they will share a booth at the event. Products demonstrated in collaboration with Telarity will cover encoders, DSNG encoder modulators, IRD and MUX.

At CABSAT, ABS Network is looking to build new partnerships in all fields related to television, broadcast, content, equipment, training and services. The company also intends to highlight how it have deployed an array of smart new professional services; a staff outsourcing division and workshop for professionals in SNG vehicles which comprises system installation, manufacture and maintenance.

Company Highlights and Achievements
ABS Networks’ biggest achievement of 2015 was the creation of Arab 24, an independent news-gathering agency and the region’s very first to bring an unbiased and comprehensive view of the Arab world to an audience who wants to acquire reliable reportage of the MENA. Arab 24 relies on a dedicated team of seasoned journalists and technical crew in every capital city in the Middle East bringing daily news from a region that is largely misrepresented. The agency has a fleet of fully equipped satellite trucks that provide real-time feeds of news and raw footage of events. News can be retrieved in text, photos, video and live telecasts dependent on existing technology in satellite, internet, mobile phones and the social media.

“We aim to deliver news from the Middle East by Arab-speaking journalists so that they script their own history (than have one thrust upon them),” says Ajlouni speaking of the motive behind the venture. “It is news from the Arab world in real-time, as it happens, where it happens and as it unfolds. It is a corridor of information.”

Reaching out to Arab and international audiences around the world, ABS has accelerated its influence with an expansive network of offices that serve as operational nerve centres. They have 14 offices, 10 of which are in MENA capitals. The company’s newest offices were opened in Turkey and Yemen in 2015 and potential new bureaus will be inaugurated in Washington DC and Kuwait. Aside from the benefit of a firm footing in global hotspots, this will further enhance ABS’ current image as a broadcaster committed to giving viewers the latest technologies and the highest quality of production. Strategic investment in cutting-edge technology has given them the assuredness of managing all aspects of the production process.

By overcoming challenges of functioning out of a relatively unstable region, ABS Network is a broadcasting gateway to worldwide news. Says Ajlouni, “We opened the office in Turkey since it came to be in ‘the eye of the storm’. A second office was opened in Yenibosna and work is underway for one in Ankara, the capital. Our branch will offer HD services encompassing four Live studios and stand up, three OB cameras, SNG news, an engineering crew, PKG, editing suites and logistic services.”

ABS is due to sign agreements with equipment manufacturers and vendors and has placed an order for a 14-18 HD camera OB Van expected to be operational at the start of 2017. Working closely with medium to large broadcasters, ABS’ new partners in the last year were DW, TRT World, sislive, TVN, MEN, ITNL, TBS, FujiTV, Caracol TV and Fox News, to name a few.

About ABS Network:
ABS Network - headquartered in Dubai, UAE - is a leading broadcasting corporation in the Middle East and North Africa.
Founded in 1993, ABS has built its unique capabilities by combining experienced personnel and professional expertise supported by the latest production and transmission equipments including more than 20 brand new fly-drive SNGs and 14 fully-equipped bureaus in Bahrain, Iraq (Baghdad, green zone and Erbil), Jordan, Lebanon, Palestine (Ramallah and Gaza), Tunisia, UAE (Dubai and Abu Dhabi) ,Turkey (Yenibosna and Besiktas) and Yemen.