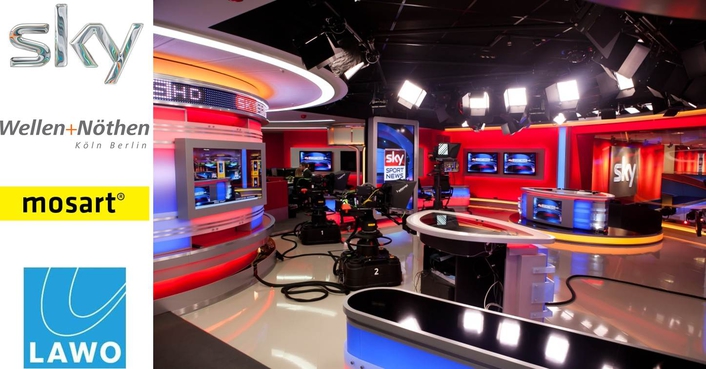 Sky Sport News HD Studio with Mosart control and a mc²66 from Lawo
Red-hot updates from the practice courts. The latest rumour about transfers. Interviews with coaches and players. Around the clock and seven days a week, ‘Sky Sport News HD’ delivers sports news in excellent quality into the homes of the viewers. Germany’s and Austria’s first 24-hours sports news broadcaster trusts in the field-tested Lawo audio quality.

For setting up the first round-the-clock sports news station in Germany, Sky Germany required an individual live studio with video and audio control room. The order was placed in September 2011, when the conjoint planning also started together with the system integrator Wellen+Nöthen. Construction of the control rooms began in October, and on December 1, 2011, the studio and the control rooms went operational.

The central audio mixing console is a second generation Lawo mc²66 with a 24+8 frame, equipped with 32 faders, three DSP boards supplying 144 DSP channels. After a software update, the number of DSP channels was increased to 288. Like the router card connected with four DALLIS frames, the power supply unit and the master MADI boards are also implemented in a fully redundant design. “Being on-air in a 24/7 routine, the reliability of the complete system infrastructure plays a crucial role: all components are under continuous operation and, at the same time, have to deliver full performance around the clock. The Lawo mc²66 mixing console offers the required operational reliability. It excels by its high performance and thus allows the smooth 24-hours operation”, says Holger Lentge, the responsible audio engineer at Wellen+Nöthen.

Stephan Schmid, the project manager responsible for Sky Sport News HD: “All system components we have chosen for this installation – like the video mixer, cameras or the matrix – are amongst the best the market can supply. This was also the reason we chose the Lawo mixing console. The best technology for an ambitious project – a complete success”.

Mosart Control
In this news control room, the Lawo mc²66 console is integrated into a Mosart control concept, so that the SCR can be operated by only two operators. No operator needs to necessarily sit down to work at the console, as this can be controlled by automation. For reaching this goal, the setting up of templates is required. Activating these templates – similar to using macros - camera tracking shots or panning, are triggered and controlled, video sources are switched via the Kahuna mixer, graphic charts are faded in or out as well as microphones and faders are opened and closed accordingly. “The Lawo Remote Protocol is supported by the Mosart control – that’s why the communication between the two systems works extremely well. Thus, not only static matrix states, but also dynamic parameters, like fader movements, can be remote-controlled,” continues Lentge.

Course of the project
Customer desires were included in the original plans during the running project. The cooperation with the customer Sky Germany, the system integrator Wellen+Nöthen and the manufacturer Lawo ran smoothly. As all participating parties proved very flexible, no delays occurred and thus the new programme went punctually on air according to schedule. “Generally, a short consultation with the Lawo project engineers was all that was needed to solve technical changes or mechanical configurations. The required adaptations were carried out fast and in a competent way”, concludes Lentge.