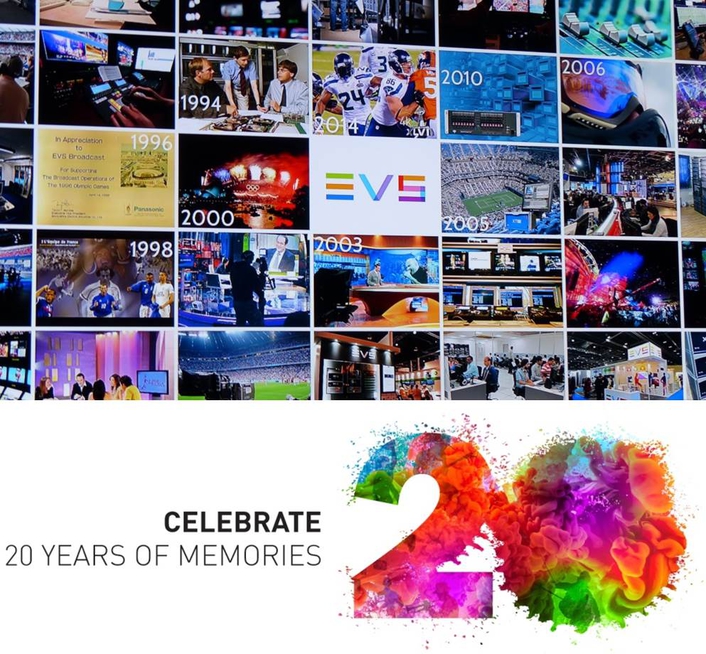 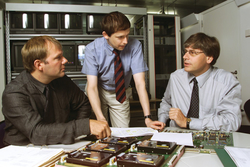 1994 EVS Broadcast Equipment S.A. is founded in February by Pierre L’Hoest, Laurent Minguet and Michel Counson. The founders of EVS aim to develop equipment for the digital recording of pictures on hard disks (disk recorders) for broadcasters. 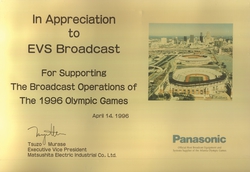 1995 EVS develops a super digital hard disk recorder in partnership with Panasonic, who released the first Super Motion camera (capturing three times more pictures than a traditional camera) for the Olympic Games in Atlanta. This helps establish EVS’ reputation at an international level.

1997 EVS opens two subsidiaries in the United States and Hong Kong, to market its equipment in the Americas and Asia.

1998 EVS opens a subsidiary in France to help manage important developments in the World Cup. In October, EVS is listed on the first market of the Brussels Stock Exchange, raising EUR 7.4 million to fund the company’s expansion and build a high-calibre team.

1999 EVS establishes subsidiaries in Italy and the United Kingdom.

2000 EVS invests in video broadcasting systems and digital cinema while Japanese broadcaster NHK asks EVS to help develop a prototype of an HD recorder for the Olympic Games in Sydney.

2002 EVS deploys the XT platform for the first time during the FIFA World Cup, networking more than 80 recorders. A new office is opened in Los Angeles to help meet the growing needs of the digital cinema market.

2003 EVS inaugurates its new headquarters. HD television starts to make its mark across the USA, South Korea, Australia and Japan. EVS launches CleanEdit, a complete solution for news production, in partnership with RTL-TVi in Belgium.

2004 EVS celebrates its 10th anniversary and a new revenue record. In December, the XDC digital cinema initiative is invigorated following the spin-out of XDC, resulting in a dilution of EVS to 60%.

2006 EVS teams help some of the largest television networks in the world during the World Cup in Germany, deploying more than 200 EVS systems. The new IPDirector architecture at the heart of this mega-production makes it possible for the highest quality images to be sent to more than 900 million viewers.

2007 EVS invests in R&D and opens new offices in Spain and Dubai to address growth in the promising studio segment, which increases by 25% during the year.

2008 Mobile production trucks for UEFA’s EURO 2008 and the Beijing Summer Olympics are equipped exclusively with EVS servers. The company in charge of video production for the International Olympic Committee uses EVS for the media server within the International Broadcast Centre. With numerous TV stations also using EVS solutions, more than 700 XT2 servers are used across the globe to provide coverage of the Olympics.

2009 EVS continues to invest in R&D, developing new solutions for the studio market including XS, Insio and Xedio.

2010 EVS technology is selected by the host broadcasters (OBS and HBS) for the Winter Games in Vancouver and the FIFA World Cup in South Africa as the preferred technology provider for acquisition, storage, editing and media management operations. At the NAB Show in April, EVS announces the acquisition of OpenCube Technologies, the MXF-based solution specialist, which becomes a new business and development unit within EVS. On May 6, Sky News launches Europe’s first HD channel based on a fully-integrated EVS production system. 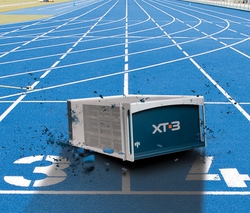 2011 EVS continues to innovate, launching XT3, the third generation of its XT servers, and C-Cast, the first system delivering complementary content, including multiple camera angles, to ‘second screen’ platforms. C-Cast is part of Sports 360°, a new concept introduced by EVS which covers all aspects of sports media, from live broadcasting to new media distribution. The company continues to gain traction in news production, winning a major contract to provide a fully-integrated solution for Sky News Arabia, a new 24/7 Arabic news channel launching in 2012. It also opens its first Latin America office in Mexico City.

2012 EVS appoints Joop Janssen as CEO. During the year, EVS technology further expands its impressive customer portfolio with its technology being widely used during the London 2012 Olympic Games or by BAFTA. High profile deals with broadcasters including Canal+ and UFEA Euro 2012 also start to use EVS’ C-Cast second-screen platform. 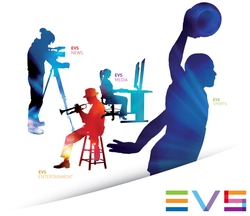 2013 EVS kicks off the year with a new market-focused strategy and vision under the broad theme of Enriched Live Production, a refreshed look and feel and a strengthened leadership team. 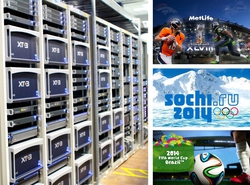 2014 EVS technology is selected by the host broadcaster (HBS) for the FIFA World Cup in Brazil. For the first time, HBS delivers enhanced content services across all multimedia platforms using EVS C-Cast connected technology. EVS solutions are also at the heart of the Winter Games in Sochi, powering NBC Sports and Panorama’s workflows. And there’s much more to come...

In 2014 and beyond, EVS will continue to be a transforming partner to its customers, enabling them to work remotely in a collaborative environment, achieve faster creation and better management of their content and streamline delivery methods across multiple platforms. The focus will be on helping broadcasters and content owners maximize live content and media asset value in more ways than ever before. 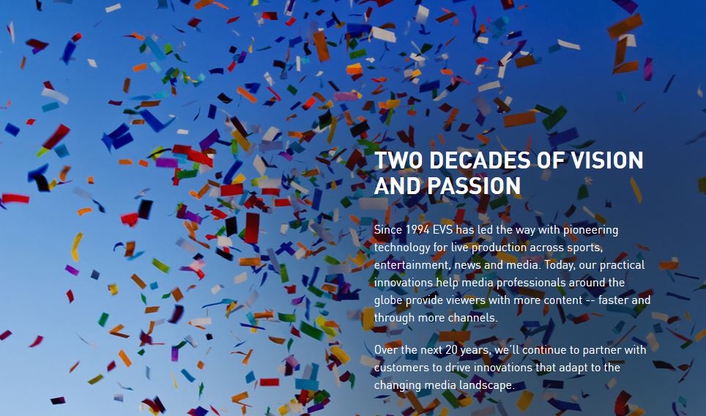