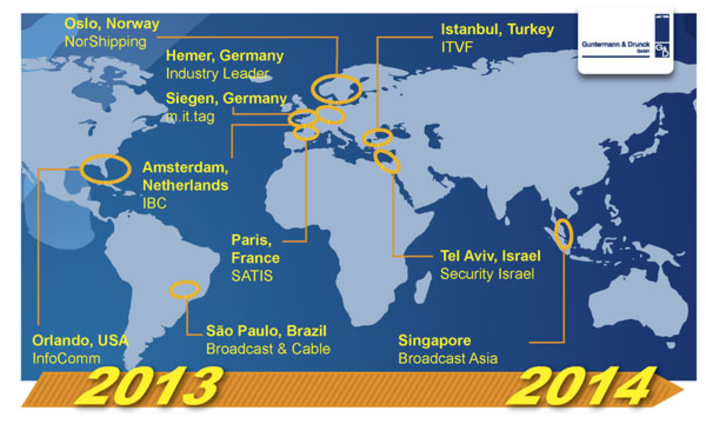 G&D’s KVM equipment travels around the globe
Never before has Guntermann & Drunck attended as many trade shows as in 2013. And the month with the most stops at trade shows is still on: In June alone, G&D will exhibit at six of the 15 scheduled trade shows. The KVM equipment and its consultants will tour the entire globe.

The trade shows clearly reflect the many facets that Guntermann & Drunck also show with their dedication to the KVM sector. Until the end of the year the German manufacturer will take its equipment all around the globe.
-   6 industries
-    9 countries
-    10 trade shows

Bridging distances – not only via KVM
Nor-Shipping in Oslo is the first trade show Guntermann & Drunck will attend in the middle of 2013. At the fair with a focus on ships, leading manufacturers get the chance to learn about the industry’s most recent products and technologies. Among the visitors are ship owners and ship operators, shipping organisations and port authorities.
From Oslo, G&D will cross the Atlantic to continue its journey in the United States. InfoComm, the leading event for audio/video and IT standards, market analyses and latest trends is a must for specialists from the AV sector.

Home match for IT specialists and industry leaders
From here, the journey will lead G&D back to Europe to attend the media and IT day. The new leading event in the Siegerland region supported by Siegen’s Chamber of Industry and Commerce is a home match for Guntermann & Drunck. On board are IT system houses, hard- and software providers as well as suppliers of digital and classic communication.
Remaining in Germany, G&D will be one of the 50 world and EU industry leaders at the Day of the South Westphalian world market leaders in Hemer. 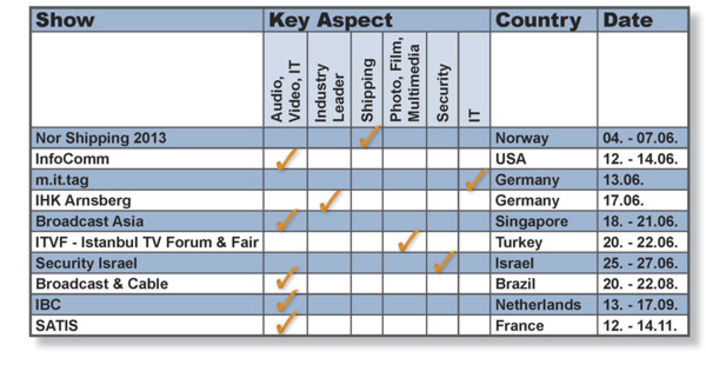 Go East: Singapore – Istanbul – Israel
G&D could hardly choose a more exotic stop for its next trade show. The tour will lead them to the tropical climate of Singapore at Broadcast Asia. Being the biggest event for the Asian audio, film and broadcast industry, the 4-day fair programme promises to be a great chance for networking.
From Singapore, G&D will travel to Istanbul, the meeting point for continents and cultures. ITVF, the Istanbul TV Forum & Fair, unites experts from TV and broadcast under one roof.
Not far from Istanbul, G&D’s next stop will be in Israel. Security Israel will present the latest developments in security technology at a trade show, a conference and many seminars.

KVM extenders in the tropics, KVM switches under the Eiffel tower
Next stop: Brazil, where G&D will participate in Broadcast & Cable, the leading broadcast trade show for the Latin-American market. With its focus on broadcast, the trade show is intended for technicians, CEOs and entrepreneurs from industries like television, radio, Internet, multimedia and telecommunications.
The event will take place in São Paulo, the country’s most important hub for economy, finances, culture and traffic.
G&D’s KVM devices will finally return to Europe in autumn 2013, more precisely to IBC in Amsterdam. For many years, the trade show has been considered the leading event for technical trends. Every year IBC requires new and further developments of sophisticated technologies from its exhibitors.
Finally, G&D’s last attractive stop of its successful trade show marathon will be Paris: one of the most important cities of the western world. SATIS is known as being the event for audiovisual technology and addresses visitors from the world of cinema, radio and multimedia.

Trust comes with experience
The year 2013 is looking to become rather eventful for Guntermann & Drunck. The diversity of industries benefitting from G&D’s products and consultants is as broad as the product portfolio of the German manufacturer. For almost 30 years, G&D uses its knowledge about control rooms to provide employees and computers with the best possible working conditions. This experience and knowledge has created a KVM portfolio proving to be one of the broadest and most combinable at the market.

KVM save the Queen’s Day
Beyond Switching and Extending
TopVision HD Ü5.1