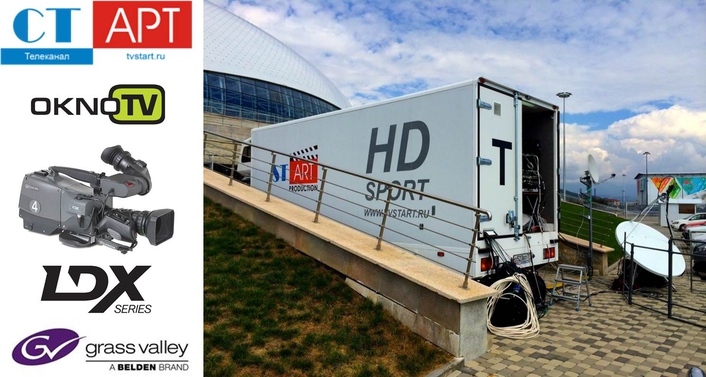 TV and Radio Company “Start” is a broadcaster of major sporting events in Russia, including football, volleyball, handball, basketball and many others. In order to improve the quality of sports production, TRC “Start” has upgraded its new ОB van with eight Grass Valley LDX Flex cameras and XCU base stations.

Cameras were purchased through the local integrator OKNO-TV, which helped TRC “Start” with all the steps of OB van building, including the design, preparation of the technical and project documents, supply of the equipment, installation, commissioning and coordination of the work process. The complete solution is designed to best meet audience needs, while providing good flexibility.

The company found that Grass Valley cameras showed the best HD quality and offered unique user functions, and as a result determined they were the best fit for a sports workflow in accordance with the latest international standards and requirements. In addition, TRC “Start” uses the K2 Dyno S replay system and LDX XtremeSpeed 6X camera system when needed in projects.

Grass Valley solutions were used for the broadcasting of the World Taekwondo Championship in Chelyabinsk (May 12–18, 2015), where TRC “Start” was a host-broadcaster. The new OB van’s first broadcast was in April 2015 at the Kremlin Palace, where the European Championship Professional Latin-American Dance was held.

Over the course of less than a month the company was involved in the broadcast of many major events such as European League basketball, semifinal matches of Russian Cup football, qualifying match of the European Championship in handball between Russia and Hungary, and Gala-match of Night Hockey League with the participation of Russian President Vladimir Putin.

In the near future, the OB van will be used for the broadcasting of the following sporting events: Moscow Grand Slam beach volleyball, handball matches of the qualifying stage for the World and European Handball Championships, World Volleyball League Grand Prix, Handball World Championship U-21, and other Russian and international tournaments.

“Sports production is so demanding and a very complicated technical process—getting the right equipment and the best quality are absolutely critical,” said Vladimir Shirokov, general producer of TRC “Start.” “We looked carefully at all the camera options on the market and felt that the LDX Flex cameras were the best choice. What really made the difference for us was the GV-eLicense model, which means we can easily upgrade the cameras if we need additional functionality.”

The LDX Flex is Grass Valley’s advanced imaging, single-format 1080i or 720p camera. The LDX Series is built for business flexibility and operational excellence, with superior imaging, processing and performance. With the GV-eLicense program, users have the ability to upgrade the LDX 80 Flex to any other camera in the LDX 80 Series based on business and production needs.

“By offering such a wide variety of camera models and capabilities, we give users the choice in how they outfit their business,” noted Said Bacho, senior vice president, EMEA, Grass Valley. “TRC ‘Start’ is a real leader in mobile sports production and has been a loyal Grass Valley customer for years. And these new LDX Flex cameras are a perfect next step for them.”