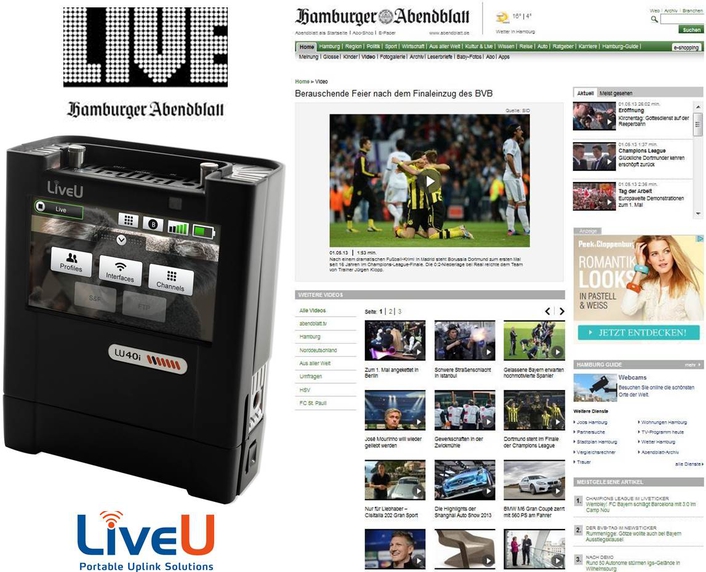 The regional newspaper is leveraging the power of live video to capture the attention of both existing and new readers. The technology has been deployed to bring successful sports blog “Matz Ab!” to the web. This brings visual news content about the local soccer team Hamburger Sportverein (in the Bundesliga) to multiple screen platforms (computer, smartphone, tablet). Post-match discussion, analysis and interviews with famous soccer players are held and carried live to online viewers. This has been so successful that the owner of the Block House restaurant chain has stepped in to host the live video blog sessions in his restaurants.

The newspaper is using LiveU’s handheld LU40 unit – designed precisely for this type of deployment – over both 3G and 4G in combination with a Panasonic HPX171 camera. For the backend there’s a LiveU cloud server, OVP (Online Video Platform) from Brightcove and Akamai CDN (Content Delivery Network). The LiveU solution and support was supplied to “Hamburger Abendblatt” by Netorium, the company’s German partner.

Zion Eilam, LiveU’s Key Account Executive, says, “Newspapers are operating in highly competitive markets with the gradual move from print to online providing both challenges and opportunities. We are very pleased to be working with Hamburger Abendblatt on this project, seeing how its local reach is being expanded via video usage, increasing not only viewer numbers but the length of time viewers are staying on the site.”

About LiveU
LiveU is the pioneer of broadcast-quality, video-over-cellular solutions that allow live video transmission (HD and SD) from any location around the world.  With top-tier customers in 60+ countries, LiveU’s solutions have been used for breaking news and high-profile events, including the 2012 US Presidential Campaign, London 2012 Olympics, Hurricane Sandy, 2011 British Royal Wedding, GRAMMY Awards®, NBA and Super Bowl. From backpacks to smartphones, LiveU offers a complete range of devices for live video coverage. LiveU’s solutions include multiple 4G LTE/3G, HSPA+, WiMAX and Wi-Fi cellular links, which are optimized for maximum video quality based on the available network conditions.