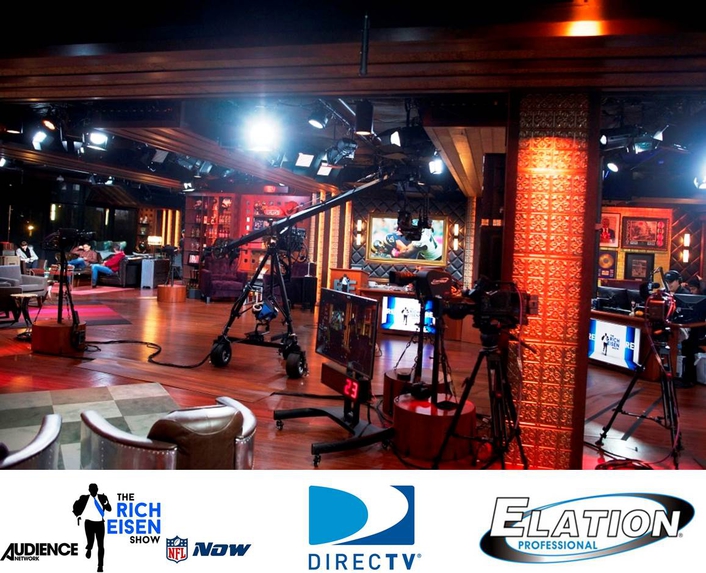 Rich Eisen, well known by U.S. football fans as host of NFL GameDay Morning on the NFL Network and a mainstay on ESPN’s SportsCenter from 1996 to 2003, hosts “The Rich Eisen Show” broadcast live Monday-Friday from DirecTV's El Segundo, California Studios on the Audience Network, as well as Fox Sports Radio.

In the summer of 2014, while the space was being refurbished into a television studio for the 3-hour show, Victor had time to contemplate his design and the lighting fixtures he would need. “I wanted a variety of professional white light and other dynamic lighting and Elation was able to give me all the flavors I needed,” he stated. “I’ve been watching the Elation product line grow for quite a while and the product has gotten really good. I needed lighting that could work with a lot of different cameras and Elation LED lights had the superior light quality I was looking for. When we brought the fixtures in and used a very high-end camera for the initial camera test, the fixtures performed well and with no flicker which is very important.”

Bright, clean lighting
“The Rich Eisen Show” studio is a beautiful set with rich dark wood, gold-colored panels, plush seating and a myriad of sports memorabilia that gives the space a warm, comfortable feel. Two of the studio’s walls are made of glass and because the show runs in the morning hours, ample amounts of sunlight come in. 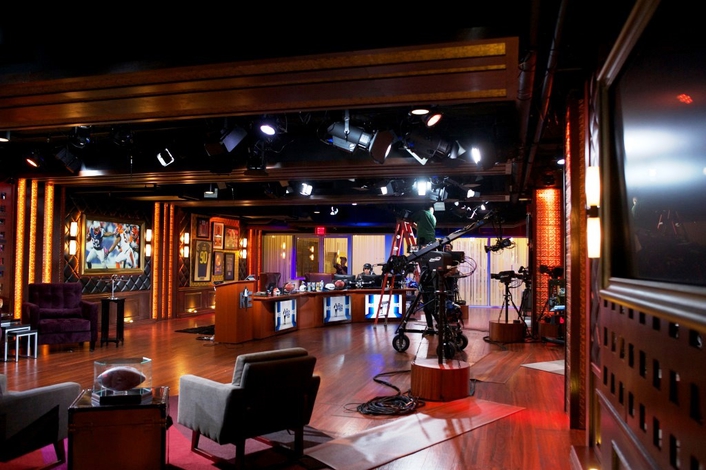 “The DW Profile and Fresnel lights give a bright and clean light with no green to the light at all,” Victor comments. “It is pure daylight white and works with the sunlight that comes in from the studio windows.” Powered by a 250W white LED engine, both the DW Fresnel and DW Profile give a soft light that is easily adjustable from warm to cool white so that Victor can modify the color temperature if needed. Both fixtures offer zoom and beam shaping for highly effective directional white light control.

Also in the rig are Elation TVL 2000 II and TVL 3000 II white light LED luminaires that blend 3W warm white and cool white LEDs for a uniform projection of flat white light and have high CRI levels. Both luminaires also have the ability to adjust with the ambient daylight and draw a low 72W of power. Victor lights both set pieces and talent in warm color tones using the fixtures’ dynamic white LED engines to vary the color temperature.

Subtle shades of color find their way into the lighting scheme via Elation Level Q7 Par lights (RGBW), which Victor uses to accent the scenery, wood and panels in an amber color, while also using them to splash a bit of blue here and there. Filling out the rig is light from super small Elar Q1 lights, each with a single RGBW LED. 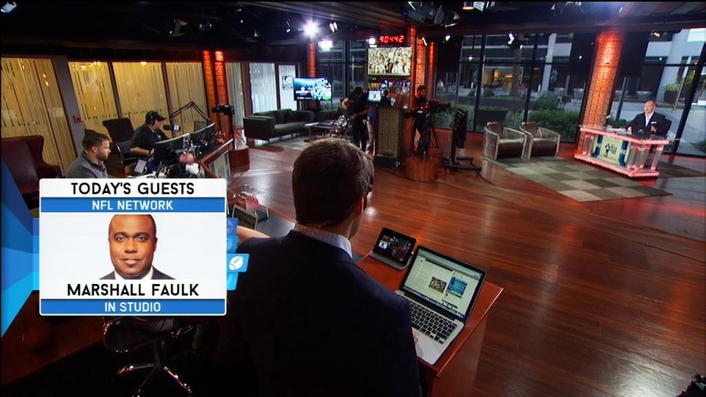 LED benefits
The LED system provides the quality of light that Victor was looking for but he chose an LED rig for the other benefits it provides as well such as power savings, less frequent maintenance and less heat output. “I wanted to deliver a lighting system that was energy efficient and one that would last without having to deal with bulbs burning out,” he says. “The Elation lights are a real energy efficient, low maintenance solution with at least 50,000 hours of life on the LEDs.”

Although, for the moment, the LED lighting system is used only for “The Rich Eisen Show,” Victor says that because the system is so flexible, there is a possibility it will be used to light other shows in the future.