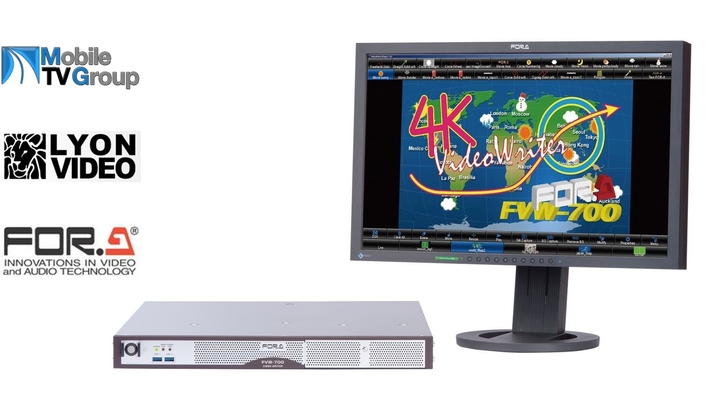 FOR-A® announces that its recently introduced FVW-700 4K/HD telestrator has been delivered to its first customers. The full-featured telestrator enables users to annotate and draw on video using a touch-screen computer monitor or wirelessly connected tablet, and has been purchased by several customers, including Colorado’s Mobile TV Group (MTVG), Columbus, Ohio-based video production provider Lyon Video, and the Rochester Institute of Technology (RIT).

MTVG is one of the largest providers of mobile units in the country, providing services for upwards of 4,000 live events annually. The Denver-based company has over 30 mobile units, and was in need of a reliable telestrator for announcers to use at sporting events that it produced.

Philip Garvin, Founder & CEO of MTVG, said, “We’ve owned a number of FOR-A’s previous models of telestrators, so we’ve experienced the reliability of FOR-A’s products firsthand. It was easy choosing the FVW-700, and our new units have been working well for us.”

“The FVW-700 allows multiple users to control the telestrator, offering a hands-free option for our client that enables commentators to draw on the screen wirelessly,” explained Chad Snyder, Chief Operating Officer, Lyon Video. “We’ve owned many FOR-A telestrators and know how robust their products are, so purchasing the FVW-700 was a natural progression. We were also drawn to the FVW-700 series because of its path to upgrade to 1080p/4K.”

With a 40-year history of developing telestrators, FOR-A developed the first model of its FVW series, the FVW-900, in 1977. The FVW-700 is the most recently introduced product in the series. Without requiring users to work at a console, the full-featured FVW-700 enables multiple users to control the system simultaneously. Additionally, a wireless tablet option is available, making telestration in sports production a more seamless process than ever before. The FVW-700 unit offers advanced algorithms for smoother telestration, including automatic freehand formation with noise reduction, which allows smooth objects to be shaped and sharp angles to be achieved. The unit also features advanced edge joining and a chroma keyer for more precise drawing. The FVW-700 is offered in four models to fit specific needs, including 4K, HDMI, Thunderbolt™ 2 and all-in-one models.