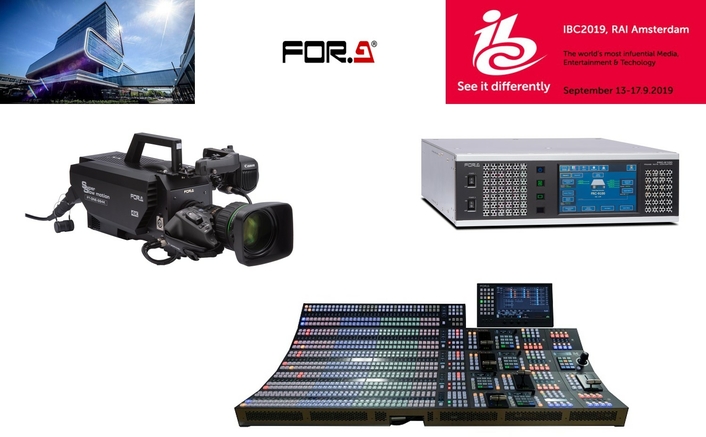 For years FOR-A® has been at the forefront of 12G-SDI/4K technology, designing and manufacturing production switchers, video servers, keyers and test signal generators that support both 12G-SDI/4K and 3G-SDI/HD resolution. At IBC2019 the company will again highlight its wide range of 12G-SDI/4K systems but will also emphasize the capabilities of its video-over-IP compatible technology. Other FOR-A booth highlights will include HDR upgrades to the FA-9600 signal processor and FT-ONE-SS4K Ultra High-Speed Camera.

An integrated baseband/IP control and monitoring system, the SOM-100 is designed for use in a mixed SDI/IP environment. The SOM-100 offers seamless operation of a variety of video equipment, monitored centrally from its interface. SDI and IP routing switchers are managed as one routing switcher in a virtual group. It can execute routing system control and process control, so that it supports collective operational changes of multiple pieces of equipment and executes time reservation. The system also features a web interface for easy access from multiple computers.

A 12G-SDI/IP multi-channel video server, the MBP-1000VS is ideal for 4K editing environments, offering multi-input/output 4K and HD support and ingest, playout and 4K  recording functionality. Users can choose from three SSD capacities with maximum 15TB to meet their system needs and can add an LTO option for immediate archiving of captured 4K material or extended recording.

New at IBC this year, the 12G-SDI/IP USF-101MDX4-12G/101MDX8-12G audio multiplexer/demultiplexer supports eight channels of AES I/O. It can support transfer rates of 270Mbps to 12Gbps.

An optional SFP connector that supports an IP interface on the 3 M/E HANABI HVS-6000 will be shown for the first time in Europe at IBC. The HVS-6000 newly offers 25G IP input/output capability and HD input capability. Offering 12G-SDI capability on all inputs and outputs, the 12G-SDI production switcher uses a single cable link. Video signals are processed throughout as a single image. The HVS-6000 is a 12 RU switcher, with a maximum of 80 inputs/32 outputs or 64 inputs/48 outputs at 4K operations.

Support for Live HDR Production
The new version of FOR-A’s popular FA-9600 multi-purpose signal processor supports 3D LUT for advanced color grading and Sony’s SR Live workflow for live HDR production. The FA-9600 flexibility allows for customers own LUT’s to be loaded into the FA-9600 and saved to a user LUT for instant recall. The dual-channel unit provides HDR and Wide Color Gamut support and conversion of multiple formats, such as: 12G-SDI, 4K (UHD), 1080p, and SD/HD-SDI. SR Live for HDR to 2K-SDR down conversion provides the same picture quality without deterioration. Each of the FA-9600 processor’s two HD/SD-SDI inputs includes a frame synchronizer. Because the multi-purpose signal processor features 12G-SDI terminals, optional software opens the door to 4K(UHD) production.

Specially designed for live, instant replay in ultra-slow motion, the FT-ONE-SS4K ultra high-speed camera is another IBC booth highlight. The FT-ONE-SS4K camera offers UHD frame rates of up to 1000 frames per second, along with a 4K real-time live output. The use of native 2/3-inch imagers, enables the use of standard 4K broadcast lens (B4 bayonet) directly with the cameras. With a 2.5 stop light advantage over previous generations of super slow-motion cameras, the FT-ONE-SS4K offers higher frame rate image capture than was possible before. During one of the most prestigious football tournaments this year, several FT-ONE-SS4K camera systems were used in the live broadcast from Madrid.