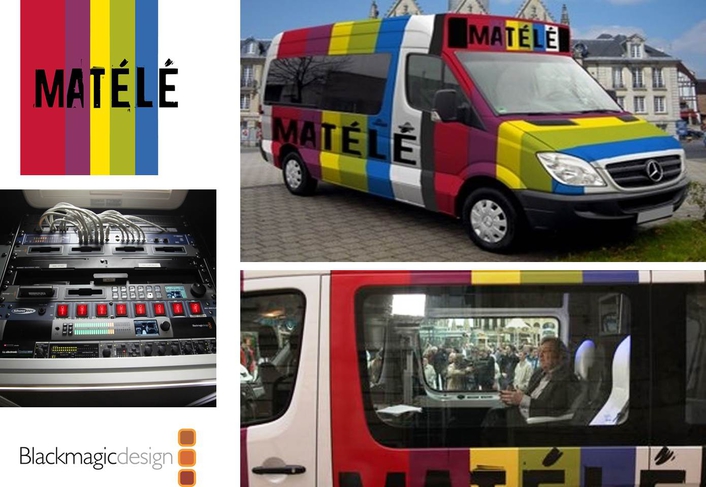 French mobile news studio brings community stories to life with Blackmagic Design
An innovative ‘Citybus’, housing a mobile studio built entirely with Blackmagic Design products is broadcasting local news and features from the heart of a community in northern France. Matélé, a local TV station launched in May 2013, broadcasts to 315,000 households in Saint Quentin, in the Aisne department in Picardy. Its daily program, Dans Le Bus, features 40 minutes of interviews and footage with local personalities, business owners and the general public, produced from a Mercedes Sprinter, which travels around the city, filming constantly for five hours a day.

As well as customizing the vehicle with brightly colored outside branding, the passenger seats have been replaced with comfy leather chairs to form a mobile studio, with the back of the vehicle housing a full production gallery.

The mobile studio is core to Matele’s broadcasting objective of bringing regional news directly to the local community. “Local news has a responsibility to reach people who are often regarded as ‘inaccessible’ by other media outlets,” explains Jean-Luc Nelle, director of Matélé.

“Of course, it’s important to report the news, but there’s a certain spontaneity that can only be produced when you go out and physically meet the people living and working in a city. Rather than simply broadcasting to the public, you must bring the news to them, and invite them to talk about what is important to them. People can slide open the door and jump straight into our studio to share their stories. We’ve uncovered some incredible and fascinating personalities, simply by letting the cameras roll rather than focus on a specific news agenda.”

The production workflow was devised by video production specialist PAD, based on the vehicle’s two man crew. One team member acts as director, presenter and driver and the other controls feeds from the eight HD cameras and manages all production equipment.

The workflow is built around the Blackmagic ATEM 2 M/E Production Switcher and 1 M/E Broadcast Panel to select and mix the show footage, whilst on the move. The eight cameras feed into a Blackmagic Compact Videohub via eight Mini Converter HDMI-SDI, which are then connected as inputs to  the switcher. Two HyperDeck Studio Pros record up to five hours of footage each day and the media is accessed from the SSDs using Blackmagic Multidock. “The ATEM Switcher has some great features, such as SuperSource multi layering, which enables us to produce very high quality footage that’s ready for broadcast when the team gets back to Matélé’s headquarters,” explains Philippe Baudet, director, PAD.

‘Dans Le Bus’ is based on a ProRes workflow and there is no need to export the footage from the two synchronized HyperDeck Studio Pro; it can simply be uploaded ready for immediate broadcast. The HyperDecks’ timecode support is invaluable for the show’s production, as timecode can be preserved from the incoming video streams, and used to collate and playback recorded files with the original timecode information, making it incredibly quick to retrieve the day’s most compelling interviews.

The vehicle also has an Blackmagic Audio Monitor and SmartScope Duo for high quality monitoring in the field. “Whilst we’ve done all we can to create a studio feel to the bus, the acoustics are a real challenge, because they can be affected by so many different factors; an unexpected thunderstorm, or a busy street can ruin a fantastic interview,” explains Philippe. “The Audio Monitor integrates perfectly with the workflow inside the bus, and ensures that we know exactly what audio quality we are working with and that it is fit for broadcast.”

From a production perspective, the workflow had to be customized so that everything can be controlled by one person, in order to compile broadcast ready footage from the back of the bus.

“All of our technical decisions were based on one key factor: how can Matélé’s crew meet as many people as possible each day?,” continues Philippe. “For example, the driver’s chair swivels and can be locked to face interviewees in the studio area, but we’ve also added a camera filming the driver, feeding a Blackmagic SmartView HD monitor in front of the chairs, so that interviews can still safely continue ‘face to face’ even when the presenter is driving. In the back of the bus, we also installed game pad joysticks into the armrest of the operator’s chair, so they can control a pan and tilt camera with precision, even on the road. It doesn’t matter whether the bus is stationary or on the road; the crew still has the ability to be producing engaging, exciting content.”

PAD has also installed on board over 40 transformers, as well as enough standalone batteries to enable the studio to run for over eight hours on the road.

The public response to the bus has been extremely positive and has justified Matélé’s strategy to focus the technical requirements on the best way to engage with the community. “Every choice was made to best suit the local community,” concluded Jean-Luc Nelle. “We even decided on the make of vehicle because it matches the public Citybuses in Saint Quentin, so people feel intrigued to find out what is going on in Matélé’s.” 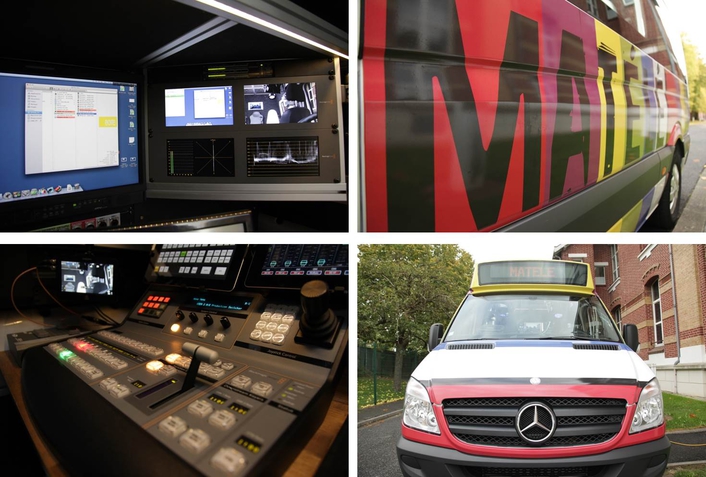 “Blackmagic Design was the perfect choice, to provide us with an affordable and reliable mobile studio environment. It provides the depth of integration our team needs to capture the real hearts and minds of Saint Quentin’s community, and the quality of content required to broadcast this in a compelling and true to life format.”

ATEM Production Switchers...ion at 2013 U17 World Cup
Access all Areas with Swansea City AFC
Preparing for the Unexpected