When Failure is not an Option

National days and major sporting events are often driven by Merging products, but when China celebrates the 70th Anniversary of the Peoples’ Republic, you can be sure that it will be on a grand scale. Add a cast of more than 100,000, a TV broadcast to a significant proportion of the 1.4 billion Chinese and the presence of President Xi Jinping, some past Presidents and all the government officials and the stakes become higher. The consequences of any interruption to the military precision of the parade would be daunting indeed. The fact that it not only worked perfectly live, but has also been hailed as the best sound ever produced for a live broadcast, has much to do with the top team of audio experts assembled to manage the event and the quantity and quality of the Merging equipment used in this remarkable production.

Tiananmen Square is a huge open space and although there is a public address system on site, it is not going to deliver broadcastable quality audio or even something that can be followed by the symphony orchestra of 1,028 musicians and a chorus of 100,000. All important audio cues such as the sound of the salute, the orchestra and chorus of 1,000 and other key elements of the event were recorded three months before in DXD using Merging’s Pyramix. This was then replayed live with the sound effects on Merging’s Ovation system in CUE mode. This allows the live sound to be mixed with the pre-recorded for a vastly improved listening experience. If this sounds simple, it is not. Several hundred cues have to be programmed in advance and adjusted during rehearsals. 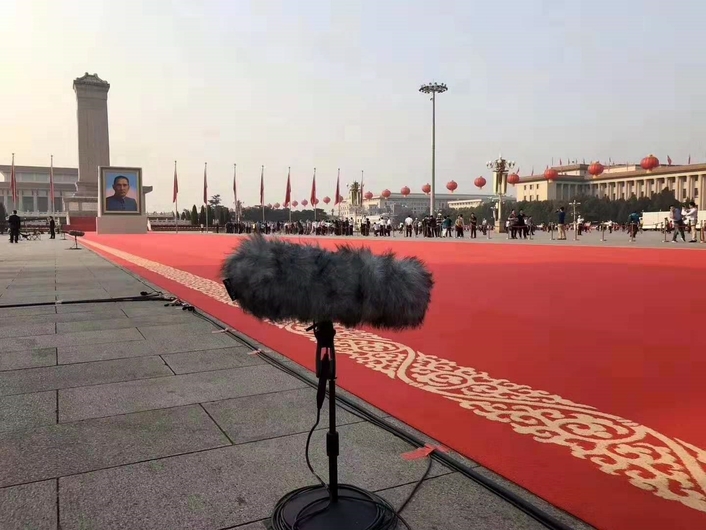 Two Ovation MassCore systems were responsible for this task and at the same time there were two Pyramix MassCore systems recording 128 channels over a 3-hour period. Using the RAVENNA network and optical fiber, it is easy to have these systems backing each other up. As may be imagined, there were a lot of microphones on site spread over a large area that needed to be mixed into the 128 channels and multiple Horus and Hapi units looked after this task. Even the new Merging+Anubis found a role to play in this impressive system. 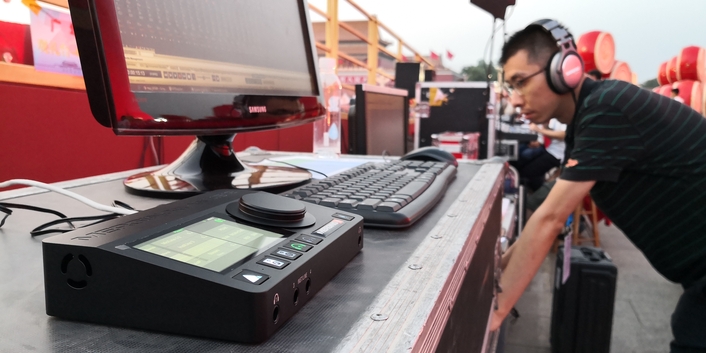 All this audio information was being captured in surround and fed back to CCTV’s studios. Engineers there used Lawo consoles to mix the multiple live feeds and manage the various delays caused by the distances involved. The final results were broadcast to the mobile phones, tablets and televisions of the huge Chinese audience all over the country watching the parade and the evening party with fireworks. 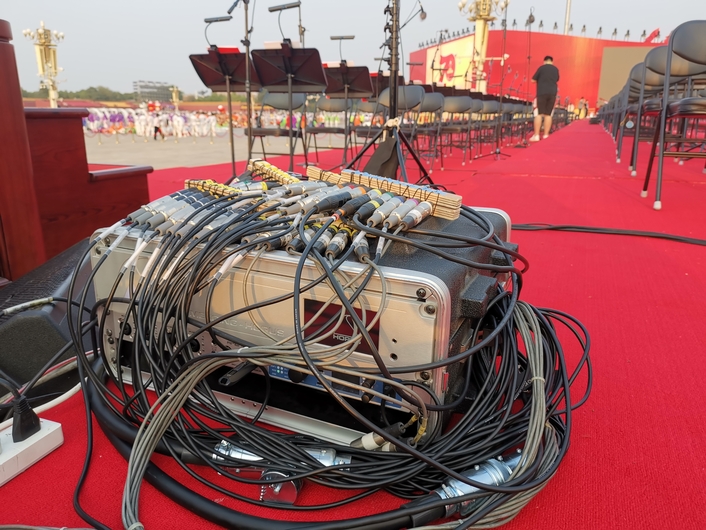 An event of this magnitude needs the benefit of talent and experience to make it run smoothly and this was certainly the case here. The leader of the team was Li Dakang, the most well-respected recording engineer in China and a professor at the China Media University in Beijing. Among those helping him were various students and protégés of his. Cao Meng is a professor at the China Music Conservatory, Fend Hayang is now General Manager of Genelec’s office in China and Zhang Li Yong. From a technical perspective, the Merging equipment was supported by Dreamula under the leadership of Zhu Jie. Also in attendance was Merging Asia’s President, Weishen Xu. A number of other experts were also recruited by Li Dakang to contribute expertise to other aspects of the installation. 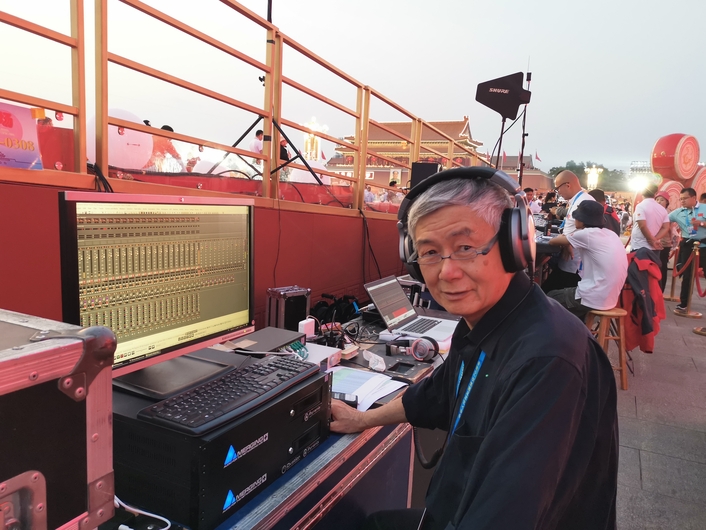 There are other statistics that need to be understood. The military parade involved 15,000 marching personnel, 600 vehicles and 180 planes in the flypast. There were also 110,000 in the civil parade with 70 floats, multiple guns firing a 21 shot salute and the President taking the parade salute from a moving car. All the audio had to be intelligible to those present as well as the TV audience. The event was on a truly epic scale but with Ovation being the perfect playout device for this situation, Pyramix being the only reliable high-track count recording and editing solution and the full range of networked audio RAVENNA/AES67 converters, it is hardly a surprise that this memorable celebration has joined the long list of mission critical events that have been powered by Merging. 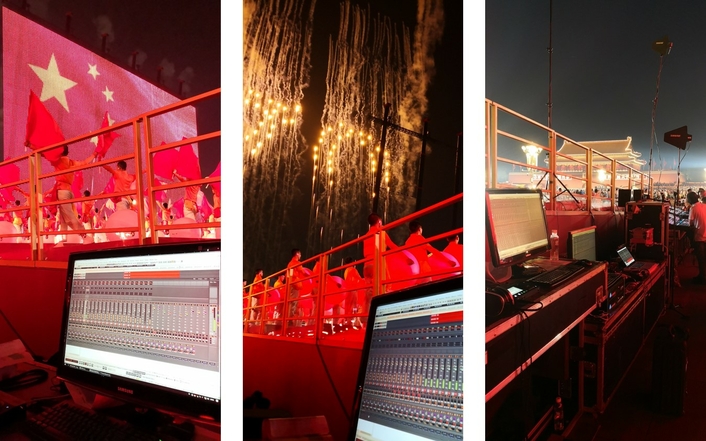 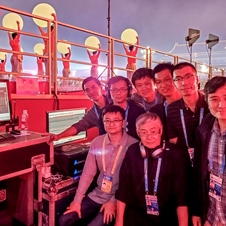 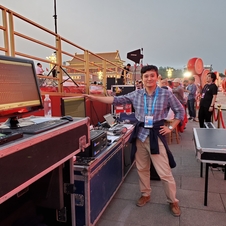 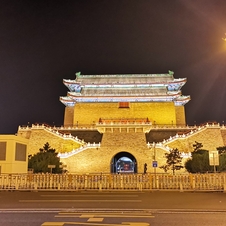 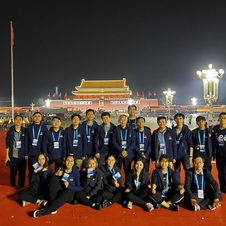 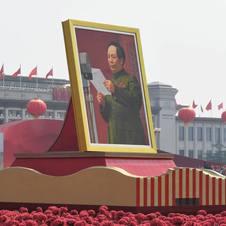 Merging Technologies is a Swiss manufacturer with over 25 years of experience in developing groundbreaking, professional Audio and Video products for a wide range of entertainment and media industries.  With a dedicated user base in the elite end of the music, film, television, mastering and performances industries, Merging is committed to developing product ranges with unrivalled quality and flexibility, no matter what the application. Merging builds tools for people who want more from their systems, have an inherent need to push boundaries, and believe that quality always comes first.

Dreamula is the trading name for Beijing Dream Equation Digital Technology Co., Ltd. which is a professional audio and video equipment integrator in China. It is the general agent, responsible for the promotion, sales, service and other services of Merging products in China, Hong Kong, Macao and Taiwan. At present, the company's products mainly include recording systems, virtual studio systems, and integrated storage management systems. Users targeted are national provincial television stations, radio stations, schools, professional audio production organizations, independent music producers and other partners. From stand-alone to full audio and video solutions, the team's experts provide users with a wealth of product experience and professional product recommendations.