The graphically represented election count at the hemicycle with regard to the actual seats of the members of Parliament
They say that in times of crisis professionals sharpen their wit to do more with less. This is just what has been achieved by those in charge of the image and technical department of TV3 in the special programming of the Catalan elections that the channel aired last Sunday live from the Parliament.

The Game of Thrones music was played and a camera flew over the trees of the Citadel, entering the Parliament of Catalonia to accompany viewers on the way to the Sala dels Passos Perduts (Hall of Lost Steps), where the presenters of the "Special election" on TV3 waited. It was the beginning of an election that made history. Therefore, TV3 got out of their studios for the first time to follow the voting at this hemicycle that was occupied by the new Parliament members during these days.

The entrance to the TV3 set of the "2012 Special Parliamentary Elections" marked the tone of a night that, in addition to comprehensive information, also offered the latest in the field of technology, a joint effort of professionals from different fields that Catalan viewers have awarded with absolute leadership of the night and a cumulative audience of nearly four million people.

Risking a key night
On the night of the Catalan elections, the commitment of the team responsible for both the implementation and production of the graphics that provided the night with data, a group headed personally by the head of image and artistic services at TV3 Paulí Subirà, was risky. 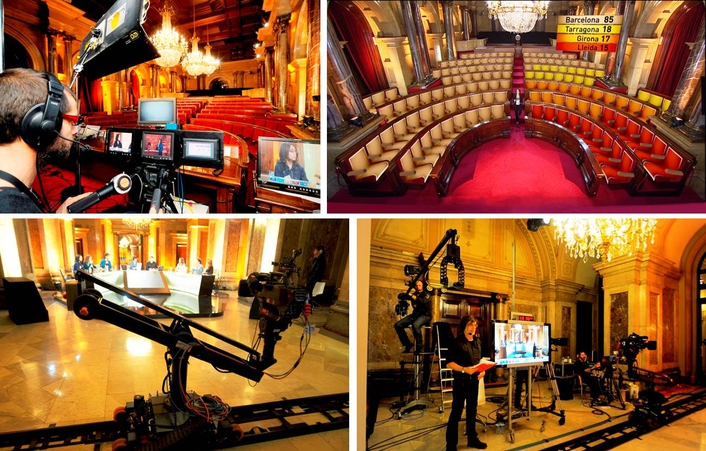 It involved excelling what had been done with the good results in previous elections and doing so, moreover, in accordance with the time of crisis in which we live, lowering the resources normally allocated to a programme like this. First, it was necessary to further develop the application of a technology that TV3 already had, and also, try new systems, with a reduced cost, that could give a totally innovative image to the election programming.

The first impression on the screen that viewers had of this commitment was the shot for entering the Parliament, facilitated by means of a Canon 5D camera installed in an octocopter (drone) and remote-controlled by a pilot and camera who is an expert in this technology, a system that TV3 had never used before in such a programme, which allowed viewers to enter the TV3 set from the air.

"Renting a helicopter is very expensive but an octocopter enables us to fly in spaces with a much lower cost and also record shots such as between the trees and the entry into Parliament, which is impossible with a helicopter" said Paulí Subirà.

"Painting" the real hemicycle
Surpassing the spectacular start —which included the use of video mapping and virtual elements, which, combined with brilliant illumination, highlighted the impressive façade of the Parliament— the other big news of the night arrived with the virtual representation of the data.

For the first time, the election night count was displayed by means of virtual graphics implemented in a real physical space. TV3 broke down the allocation of seats in the hemicycle of the Parliament, "painting" the real seats with different colours that the Parliament members would soon occupy and adding a technology already known to be difficult by exactly matching the graphic image with the corresponding seats.

"We have no evidence that this has been done before. Channels like the BBC and we ourselves have virtually recreated the Parliament before, and we had worked with graphic image data before, but we are not aware of anyone ever working on a real hemicycle" said Paulí Subirà.

These graphics on the composition of the hemicycle, equipped with a movement that is similar to the 3D effect, and done for the first time in high definition, were supplemented throughout the entire night with other data, thanks to the same technology, which virtually appeared in the Hall of Lost Steps, where the main set of the channel was installed. From there, viewers could follow the results minute by minute by means of maps of the territory, bars with the percentages of the count in each demarcation and screens that connected with external lines.

To prepare all the necessary equipment, a hundred professionals from TV3 worked in the Catalan hemicycle the days preceding the programme. They were assisted in the adjustment of the systems by those in charge of the company Kronomav, responsible for installing the travelling robot that enabled seeing the virtual graphics with motion cameras and using a rendering system by ORAD, the company responsible for the equipment normally used by TV3 in its work with virtual sets, the specialists in real-time graphics from the image department of TV3 and the technical professionals of the channel. Theses groups transformed the normal features of the Parliament into a network of cables, cameras, robots and screens.

"The hardest thing was to adjust the synchronization between the graphic images and the real place where we had to project and also adjust what the movement of the presenters would be when showing these graphics. In an election night, we normally have three cameras in the studio doing graphics, whereas at the Parliament on Sunday there were six, two of which were capable of movement or virtual sensing" said Paulí Subirà.

Subirà, who in addition to adding election nights to his curriculum, has also been responsible for the images of other large specials by the channel, such as the design of the television coverage of the Pope's visit for the consecration of the Sagrada Familia and the development and production of stereoscopic 3D on TV3, which includes directing the multi-awarded documentary Enxaneta in 3D. Among the most current works, this Sunday stands out as a major development in the history of the channel. 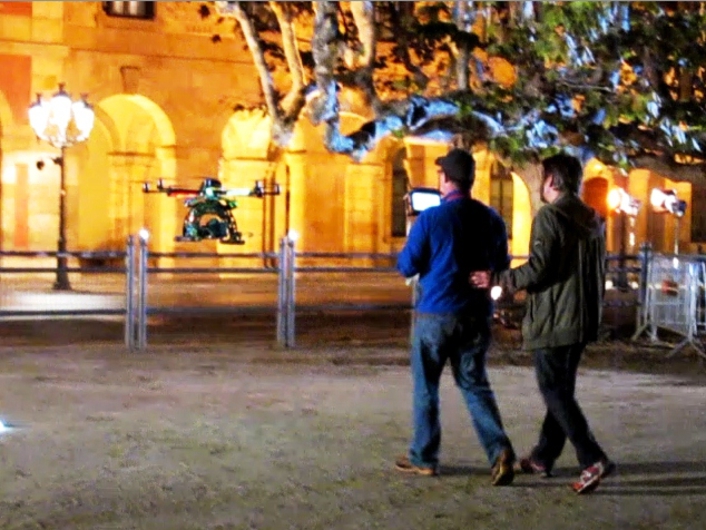 "On a technological level, some things like video mapping we had already tried other times, for example in the programme Com va la vida with Andreu Buenafuente and Eduard Punset, but now, in the special elections we have post-produced it. Also in the Barça elections we had tested virtual graphics applied to a physical space, with the projection of the election results in the stands like a mosaic, since a sports theme allows you more room to play, but without a doubt, due to the difficulty, this Sunday was one of the most complex deployments we have ever done” said Subirà.

The best for TV3 teams, a channel that from its inception has made a commitment to being a pioneer in the use of technology, continuing to take risks to improve and keep reinventing itself.