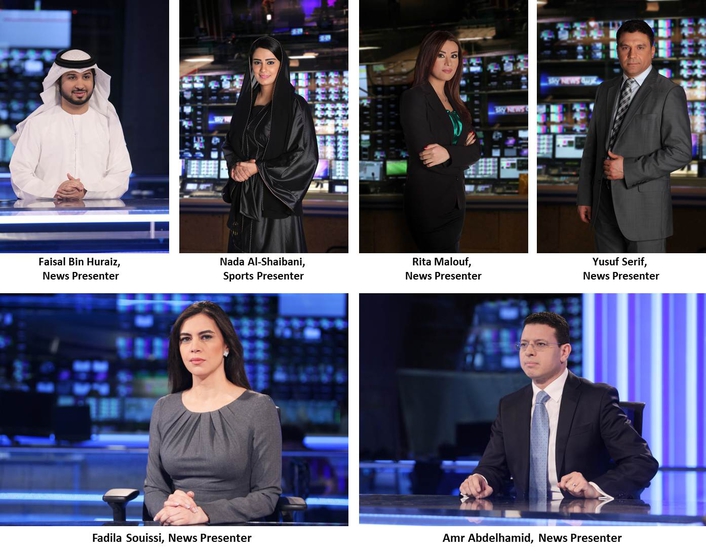 First wave of presenters announced ahead of channel’s much anticipated launch
Sky News Arabia, the 24 hour Arabic language multi-platform breaking news service launching in spring 2012, today unveiled six of its presenters who are now on-board and immersed in rehearsals.  The presenters, drawn from across the Arab world, are the latest additions to the Sky News Arabia team as the channel continues, on track, to its launch.  All of the channel’s presenters have now been selected with further announcements expected in the coming weeks.

Nart Bouran, Head of Sky News Arabia, said: “I’m absolutely delighted to be able to announce our first batch of presenters.  Each one of our presenters brings a wealth of talent and experience, and we are excited to welcome them to the Sky News Arabia family.

“The presenting line up is crucial for any channel. As a voice from the Arab world to the Arab world, representing a vast range of cultures and backgrounds, it was vital that we did our homework.  We were determined to build a strong team with a great mix of well known faces as well as fresh young talent. I am confident we have achieved this. “

As part of the selection process, Sky News Arabia commissioned in-depth market research, carried out both face to face and online, with a panel of over 700 respondents from across the region.  Among the key attributes researched were whether potential presenters displayed ‘vibrant energy’, ‘a distinctive and modern style’ and ‘had credibility’.

Bouran added:  “The final decision ultimately lay with the editorial management team, however, the outcome of the assessments largely correlated with the rigorous interview process each candidate undertook.

“These presenters will reinforce Sky News Arabia’s dynamic approach to delivering the best live coverage for news as it happens across the Middle East and North Africa and further afield.”

Amr Abdelhamid, News Presenter
Amr started his career in 1998 in Moscow as a correspondent for BBC Arabic radio.  From there he took on the role as a bureau chief for Abu Dhabi TV and then Al Arabiya and Al Jazeera.  Prior to joining Sky News Arabia, Amr was a news and programme presenter in London.  During his career, Amr has covered a range of breaking news stories such as the war in Afghanistan to the war in Lebanon (2006).  He has also interviewed a number of influential international figures including Vladimir Putin, Jalal Talbani and Hamid Karzai.

Fadila Souissi, News Presenter
Fadila is most widely known from her time at Abu Dhabi TV.  As a senior presenter, Fadila was considered one of the most prominent anchors in the UAE when hosting Mouthir Lili Jadal, a socio-political weekly prime time programme.  Fadila then went on to present Al Madar, a daily news show on Abu Dhabi TV.  In her career Fadila has interviewed over 500 guests.

Yusuf Serif, News Presenter
Yusuf began working in journalism in 1997 as TV reporter in Istanbul for WTN (Worldwide Television News) prior to spells with Abu Dhabi TV and the French language Radio Monte Carlo.  He then moved to Ankara to join Al Jazeera as bureau chief before moving to Al Arabiya as a senior reporter.

Faisal Bin Huraiz, News Presenter
Before joining Sky News Arabia, Faisal was part of the team which launched the news centre at Abu Dhabi Radio where he worked as a presenter and reporter and later as news bulletin editor.  Faisal moved from radio to TV to work at Abu Dhabi TV as a news presenter hosting Uloom Al Dar . He has developed a reputation for being one of the most talented young Emirati presenters on TV.

Nada Al-Shaibani, Sports Presenter
Joining the Sky News Arabia team to cover sports, Nada brings a wealth of experience.  She was the sports news presenter and programme anchor at Al-Kass Sports channel, covering some of the most important sport events in the region including the 2009 Gulf Cup in Oman through a daily morning show called Al Dhahwaniya.  Before that Nada strengthened her content development, production and supervision skills while working at Qatar TV.