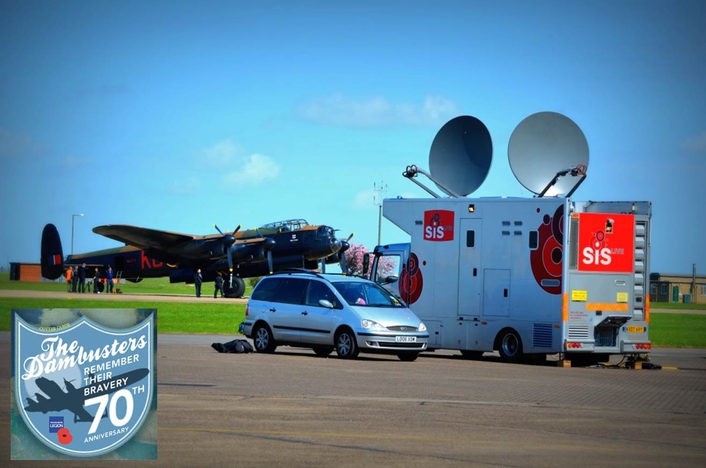 .
On 16th May outside broadcast and uplink specialist SIS LIVE supported the BBC in the creation of a special programme which paid tribute to the famous Dambuster’s raid which happened exactly 70 years previously. The same night in 1943 saw the launch of 19 Lancaster Bomber aircraft as part of Operation Chastise. This daring undertaking saw the first wartime deployment of the innovative bouncing bomb named ‘Upkeep’ which aimed to destroy German dams and hence flood the industrial heart of Nazi territory.

This hour long programme aired from 7pm on BBC2 and was presented by historian Dan Snow from RAF Scampton in Lincolnshire where war veterans and their families gathered to honour those who were part of the operation. The moving tribute featured a fly past consisting of Spitfires; Tornado Jets from the current 617 Squadron; and one of only two operational Lancaster Bombers in the world. The Queen’s Colour Squadron and the RAF’s College Band were also in attendance, ending the commemoration with a Sunset Ceremony.

SIS LIVE’s flagship OB 1 outside broadcast unit was on site providing the hub for the show’s creation, crewed by an experienced SIS LIVE team under the guidance of Graeme Robson. Lead SIS LIVE Engineering Manager Graeme Robson has extensive experience managing the technical delivery of important events such as this, including the Festival of Remembrance in 2012 and All the Queen’s Horses Pageant at Windsor Castle as part of the Diamond Jubilee celebrations.

Graeme says “These commemorative events are of great importance to a great number of people and often very emotional both for those attending and those watching on TV. Therefore the broadcast has to be delivered not only flawlessly but also sympathetically. All SIS LIVE’s on site activity has to be conducted unobtrusively and with all the respect that these occasions deserve. We feel privileged to have been involved in this tribute.” 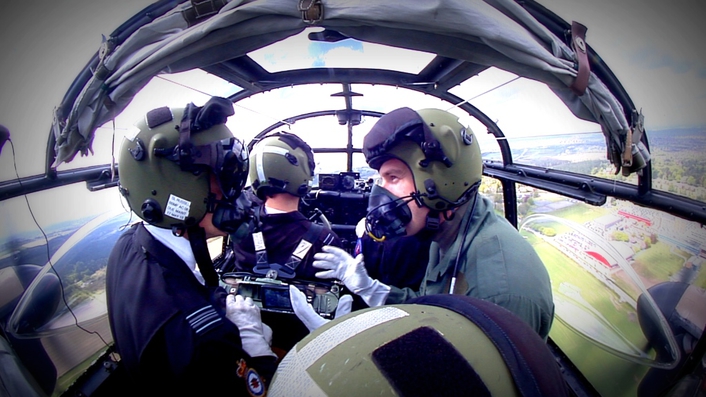 SIS LIVE employed 6 Sony HDC 2500 cameras with 2 of these mounted on 58 m Hoists to capture views of the aircraft on the ground and the aerial display during the live show. There were 2 PSC cameras at Derwent Water and another to film pre flight events at the RAF Base.

The SIS LIVE Special Cameras team has built a strong working relationship with the Battle of Britain Memorial Flight (BBMF) over many years and has the notable accolade of being the only Ministry of Defence (MoD) approved providers of broadcast installations of cameras, live radio links and communication equipment for the Lancaster bomber. During this time our specialist team has worked closely with them to create various air-worthy, MoD-approved installations. It was, in part, for this expertise and knowledge that SIS LIVE was called upon for this broadcast.

Graeme Lee, a member of the SIS LIVE Special Cameras department, has amassed an impressive 30 hours of flying time in the Lancaster Bomber, more than some of the pilots, and it was he who produced live and recorded mixed feeds from the 7 mini cameras located throughout the aircraft. This enabled presenter Dan Snow to deliver a live commentary of his fly past over Derwent Water as well as giving viewers an insight into the cramped conditions within the Bomber itself.

As Graeme Lee explains “Prior to the flight our broadcast systems were put through a range of tests for safety and interference, and trialled during a test flight before receiving approval from MoD and BBMF. BBC production wanted me to take part in a fly past display over Derwent Water in Derbyshire on the morning of the 16th to record a number of pieces to camera with Dan Snow. This was to be a challenge as the Lancaster was going to be flown and thrown around in order to reproduce the test and training flights carried out by 617 Squadron during 1943. My responsibilities were to record all 6 camera positions; mix the audio speech from Dan Snow and monitor the air craft Comms as well and produce a balanced program mix. At the same time I was controlling the exposure of all 6 cameras and colour balancing them so they all looked similar when I cut between them. And as there was to be only one fly past I had to deliver all of this first time.” 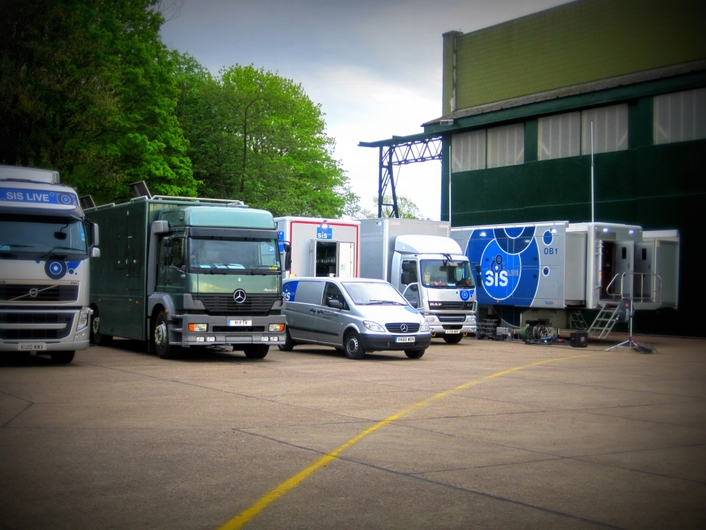 After 2.5 hours in the air the Lancaster landed at RAF Coningsby and the recorded material was swiftly couriered to RAF Scampton where SIS LIVE VT Editor Rob Screaton had just 2 hours to create an edit for the show that night. The team had discussed the work flow of the non-linear recorded material in great detail previously. The agreed solution was for Graeme Lee to follow a shooting script provided by production and to mix the sequence on board as far as possible. The goal was to produce an accurate story board item which would then form a basis from which Rob could work, dropping in additional shots from the 6 ISO recorded cameras as and when needed. Other recorded footage arrived in a variety of tapeless formats and was also fed into the edit, including aerial footage from the BBC News Helicopter which had to gain special permission to land at RAF Scampton. This extensive pre-planning helped speed up the editing process and meet the production deadline.

While this was going on the SIS LIVE team reset the Lancaster cameras for the live transmission that evening and went through the usual line up and test procedures. During the live transmission a sophisticated RF system was employed to ensure the safe delivery of HD images from the air. Pat Blackburn, communications supervisor, supported by Andy Hame both have many hours of air to ground broadcast experience and brought a great level of experience to the proceedings. The positioning of vision transmit antennas on the Lancaster was a challenge as no modifications could be made to the airframe of such an historic aircraft. To compensate, various microwave diversity receiving locations, with a variety of antenna types, were set up and comprehensively tested to make sure the pictures and sound from the Lancaster reached the scanner and on site edit facilities.

Ian Russell, Director, BBC said “It all worked out so well. This was largely due to the wonderful support of the whole team, there was such a determination from everyone involved to make sure it would all work. For me, it was a joy to be in the middle of such a supportive team. Thank you for all your time and attention to detail and, most of all, for providing such a well specified OB that could flex with the demands of the event. Thanks to the whole of the SIS LIVE team for their tremendous achievements.”

SIS is one of the world’s leading companies in the television broadcasting industry. It is the foremost supplier of television programming and data services to the UK and Ireland betting industry. The company’s broadcast business, SIS LIVE, has the largest satellite uplink fleet in Europe and is the largest outside broadcast provider in the UK. It offers a complete broadcasting solution including onsite outside broadcast facilities, global distribution, satellite internet and IP provision, special camera systems, wireless camera solutions and broadcast systems integration. SIS LIVE designs, manufactures and sells an award-winning range of satellite and broadcast products. The company covers 100,000 hours of live events worldwide each year and credits include the America’s Cup, Formula One, Wimbledon Championships, Glastonbury Festival and European Tour Golf, and delivers approximately 80% of live news feeds across the UK.