.
The Belgian organisation CAP48 aims to change society’s view about the question of handicap (be it physical, mental or social) with enhanced integration. It strives to raise funds for the disabled in Belgium via activities such as an annual TV show, produced in cooperation with Belgian TV channel RTBF.

The charity appeal — in the shape of a special show featuring top national and international artists — is broadcast live, and as such the TV set calls for an exceptional stage design.

Belgian lighting designer, Jean-Jacques Marotte, was tasked with delivering this, and his vision for achieving it hinged around the SGM LT-200 LED tubes.

“We wanted the audience to be very close to the stage, with an illuminated centrepiece creating an intimate effect during the dialogue, but also deliver a bright set, as you would expect on prime time TV,” explains Marotte. “The idea behind using the LT-200 was to animate and colour the centre of the set. I wanted tons of animated light zipping up and down, and the LT-200 gave me an amazing choice of lighting states, combined with scenic movements.”

JJ Marotte’s inspiration came after testing the LT-200 for TV usage. Seeing the high scale 3D pixel tube installation with 3,300 pieces at this year’s Pukkelpop Festival in Belgium won him over and convinced him to move forward.

Three independent rectangular trusses were raised ­ one behind the other and controlled by a Kinesys system. “This allowed me to fly the tubes both according to my wishes and those of the artistic director for the various sets, the singers and the speakers,” states Marotte. 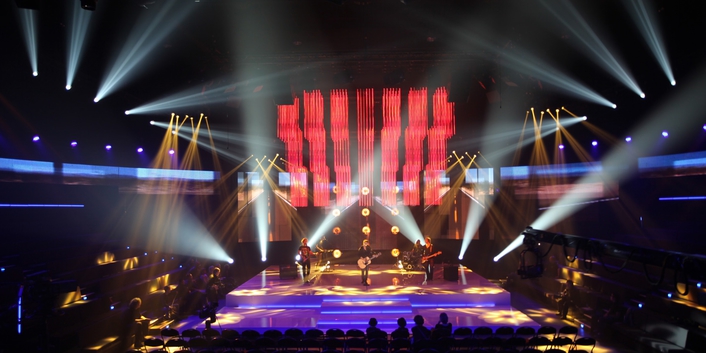 The TLD-612A touring LED driver (with ArtNet) controlled the LT-200 set, while Madrix was deployed for the video content. The lighting designer and his video director, Didier Coenen, decided to run the LT-200 separately, adapting their video loops to the Madrix Mbox as this provided a simple and easy solution in a situation where the TV show did not leave much time for the pre-production.

Designing for television presents certain challenges — especially regarding the viewing angle. With nearly 360° to illuminate (300° for the CAP48) everything is panoramically exposed. “You always have to keep in mind that it’s not just the front view that you need to worry about, but there is also a camera angle from behind, and from the sides of the scene. The video content we sent to the LT-200s gave the right depth to the set and simulated 360° lighting. The 3D effect we created, combining the lighting set and the LT-200 tubes, was simply amazing,” states JJ Marotte.

With high audience ratings and a record amount raised for charity, the CAP48 was nothing short of a success, ensuring funds for pedagogic, infrastructural and mobility projects for the disabled. Besides the simple satisfaction of being part such a humanitarian event, Jean-Jacques Marotte has also received much positive feedback for his lighting design.

The interest in the LT-200 and its functionality was immense and the experienced LD understands why. “Combining the video loops and the light gives you a wide range of incredible choices,” he says, also noting the light weight of the LED tubes and ease of set up. This, combined with the discreteness of the black controller and black cabling, contributed to the memorable experience of working with these SGM fixtures. 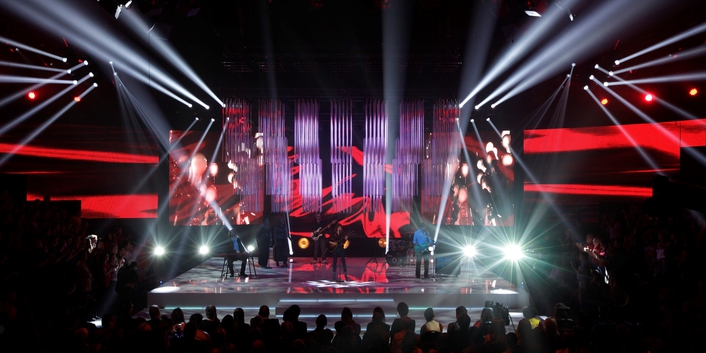 Jean-Jacques Marotte specialises in both TV shows — primarily prime-time and music programmes — as well as events, and he has deployed several SGM products in his earlier designs. For the French reality show, le pensionnat a la champagne, the P-5 wash light and its bright white wash ‘sister’, the P-5W, were used, while he applied 22 powerful X-5 LED strobes for the show called NRJ in the park, attended by 50,000 people.

And JJ Marotte has not finished exploring the SGM portfolio — or working with the LT-200 come to that — as he is already considers using it for another charity campaign finale for Make a Wish.