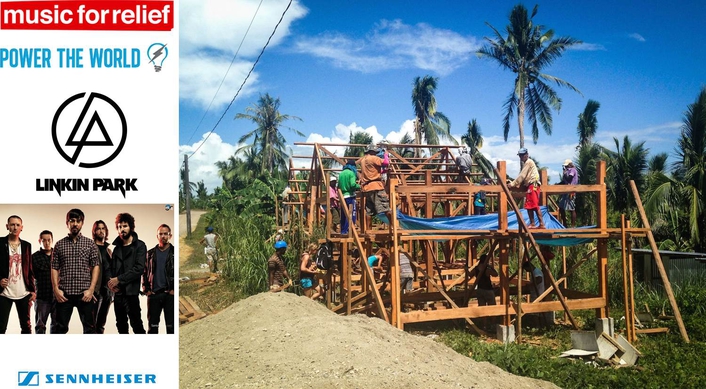 Music for Relief helping to rebuild, following Typhoon Halyon in the Phillipines
When the Indian Ocean tsunami devastated Southeast Asia in 2004, rap-rockers Linkin Park endeavored to leverage their international fanbase to assist. Shortly thereafter, they founded Music for Relief: a charity that helps artists and fans connect to provide relief for natural disasters around the world. The organization’s vital mission is to mitigate and prevent the damaging effects of these disasters through environmental initiatives including forest preservation and tree planting. Linkin Park has remained instrumental in raising funds for Music for Relief, and recently worked with Sennheiser to provide several SKM 2000 wireless handheld transmitters with MME 865-1 capsules for an auction fundraiser – including some autographed by the band.

“When a natural disaster occurs, many people out there want to help in some way but don’t know how,” says Kimberly Hurtarte, Advancement Associate for Music for Relief. “Linkin Park knew they were in a position to mobilize not only their fans but also other bands to get involved.” Since 2005, Music for Relief has raised over $7 million for survivors of multiple disasters across four continents including Hurricane Katrina, China’s Wenchuan earthquake, a cholera outbreak in Zimbabwe, earthquakes in Haiti and Japan in 2010 and Typhoon Haiyan in the Philippines. More recently their ecology and prevention efforts have taken center stage in places like Baja California, where the organization has been working to protect mangrove forests, which serve a critical role in protecting the coastline from deforestation and development.

Coming Together for Relief
Companies like Sennheiser are part of the enthusiastic network of friends and sponsors that Linkin Park and their compatriots are able to call upon to further their fundraising efforts. Recently, when the call went out for items to offer at an auction benefitting Music for Relief, Linkin Park reached out to Sennheiser, which assisted in providing several SKM 2000 handheld transmitters coupled with MME 865-1 capsules: the choice mic and capsule configuration of Linkin Park vocalists Chester Bennington and Mike Shinoda. The auction was further enhanced by Linkin Park’s donation of their very own tour-utilized SKM 2000 microphones signed by the band.

“Sennheiser is proud to play a role in a caring musical community, particularly one that is able to mobilize relief efforts for those impacted by natural disasters,” commented Pierre Morant, Sennheiser’s Manager, Music Collaborations. “We could not be more pleased to play a role in such an important endeavor.” 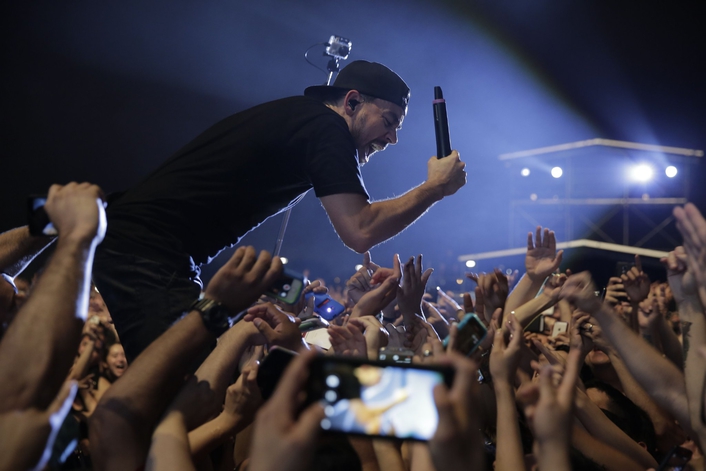 Linkin Park’s microphones were successfully auctioned off for charity

A Cut Above
Linkin Park began using the Sennheiser SKM 2000 with MME 865-1 capsule in 2010 after monitor engineer Kevin McCarthy conducted a shootout of 10 transmitter and capsule configurations from major manufacturers. “The SKM 2000 with 865 capsule was the clear winner,” McCarthy says. “The sound quality is amazing and wireless functionality is extremely reliable.” McCarthy also noted that the capsule performed evenly even when Bennington and Shinoda were wrapping their hand directly around the capsule, a common microphone technique during energetic live performances. “A lot of the mics we tried sounded completely different when they wrapped their hand around the capsule, but the 865 sounded exactly the same, which makes it much easier to get an even sound throughout the performance,” he says. Linkin Park have been touring with six sets ever since. These mics include a main and back up for each lead vocalist as well as two sets for any guest vocalists that might join them on stage. Three of these road-used mics were donated to Music for Relief for the charity auction. “These are really popular with fans so they usually bring in a significant contribution,” says Hurtarte.

Music for Relief distributes the funds they raise to organizations and individuals working on the ground around the world. “Our supporters like that we’re less bureaucratic than many humanitarian aid organizations, it’s more of a hands-on operation,” notes Hurtarte. “The fans and artists we work with are very much a part of the process and they always want to know exactly who we’re working with and how the funds are being utilized. We can provide a level of transparency that’s not usually available in larger-scale organizations.”

A Growing Effort
Humbarte is quick to point out that Music for Relief now incorporates many artists beyond Linkin Park, though the band remains active on the board of the organization and contributes a dollar for every ticket of every show to the organization. “We’re grateful to be able to empower all kinds of different artists and their fans to make a difference globally, and we couldn’t do it without the support of sponsors like Sennheiser who help keep our operations funded year-round,” Hurtarte concludes. 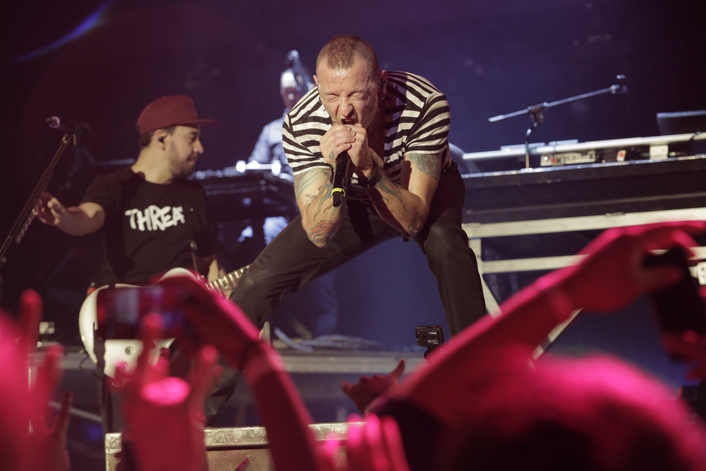 Linkin Park’s microphones were successfully auctioned off for charity

About Music for Relief
Founded by two-time Grammy winning/multi-platinum rock band Linkin Park, Music for Relief is a 501 (c) (3) non-profit organization dedicated to providing aid to survivors of natural disasters and the prevention of such disasters.  Since its inception in 2005, Music for Relief has raised over $7 million for survivors of multiple disasters across four continents. Music for Relief also supports environmental programs as a means of disaster risk mitigation including the planting of over 1 million trees to help reduce global warming and Power the World, a program bringing clean energy solutions to the 1.3 billion people worldwide without electricity.  The organization was recently recognized by UN Secretary-General Ban Ki-Moon for the Download to Donate program to raise funds and awareness in the aftermath of the Haiti earthquake.