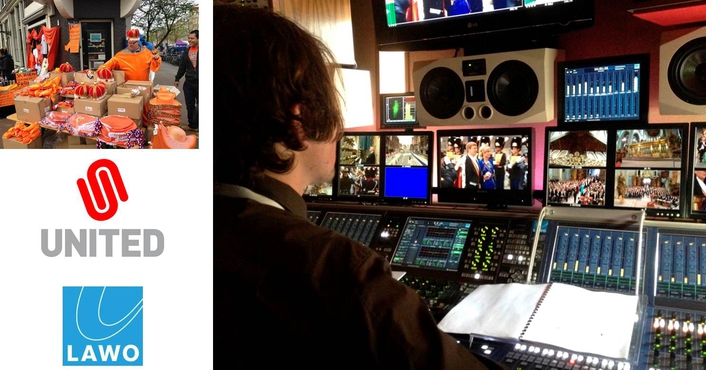 The Coronation of Dutch Prince Willem-Alexander
The recent abdication of Queen Beatrix on April 30th made way for her son, Willem-Alexander, to become King of The Netherlands. The occasion was marked by a grand ceremony that was broadcast live by Dutch national broadcaster NOS, as well as being relayed to many other countries, and also by a special concert from Dutch violin superstar, André Rieu.

Handled by Dutch full service specialist “United”, the broadcast of the day’s events required a total of 160 cameras, with Jeroen ‘Huub’ Lelieveld serving as sound supervisor for the official ceremonies at the royal palace in Dam Square and the Nieuwe Kerk (New Church). Central to the audio operation was United’s OB14, one of four Lawo mc²66 vehicles operated by the company. With 12 layers of 56 faders on the console and comprehensive audio control from its MKII Router, the truck is regularly used for 192-channel multitrack recording.

‘Our Lawos are used for every kind of job you can imagine,’ Lelieveld says. ‘They are our central audio routers, controlled by VSM software, and we use them on complicated sports events, big live events, shows and music.’
To date, this includes major football events, multitrack recordings of major music concerts (such as André Rieu at the Vrijthof, Coldplay at the Paris Stade de France and Toto in Italy) and a Red Hot Chili Peppers album launch, which was broadcast live to cinemas worldwide using the mc²66’s built in AMBIT upmixing DSP module to deliver stereo segments in 5.1 surround.

‘I heard the mix in a cinema and was very impressed by the sound of the AMBIT algorithm on cinema speakers,’ Lelieveld says.

Quality counts
Unsurprisingly, the abdication of Queen Beatrix and coronation of Prince Willem-Alexander was a huge media production, with the requirement for redundancy at every point.

‘The fantastic thing about this event was that, for both NOS and us, the most important thing was the quality of the broadcast,’ Lelieveld says. ‘So I was able to prepare thoroughly, with several visits on-site beforehand, when I tested out different microphones and microphone set-ups. We had double mics for all of the important sources – for the Queen and new King in both the abdication and coronation ceremonies, and for the speech that was made from the church balcony in Dam Square. 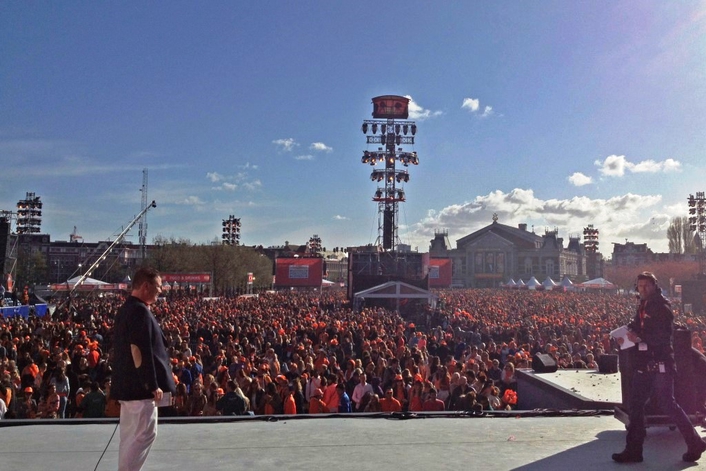 ‘We started setting up five days before the event, and we had one big rehearsal with Willem-Alexander and his wife Máxima the day before the big event,’ he adds. ‘During the rehearsals, Willem-Alexander was nice enough to spontaneously give me a sound check from the throne – both sitting down and standing up!’

The duplicate mics were supported by redundant audio connections, with all signals patched into a Lawo DALLIS stage box and into copper multicore cables fed to the local I/O of the mc²66 console in the OB14 truck. The signals on copper cable were also patched into a second truck handling the national programme, which would also be ready take over in case of a failure in the main truck. ‘I used about 160 input channels on the mc²66. The setup comprised a stage box connected via fiber and 15 copper multicore cables for redundancy and additional signals’ says Lelieveld.

‘The PA company in the church also took an analogue split from the microphones, so you can imagine that with so much copper and three parties connected to these microphones, it was quite a challenge to keep the signals hum- and buzz-free without compromising the safety of the broadcast.

‘In the end, we had to use an active splitter in the church – which is, of course, a single point of possible failure, but a king's speech with a bit of buzz is no option really…’

On the day, however, none of the backup provisions were needed.

‘A challenging part of the abdication/coronation ceremony was the oath of the members of parliament,’ Lelieveld says. ‘A total of 250 members of parliament took their oath during the coronation ceremony in the New Church. All 250 people had to be heard on the television broadcast but no microphones were permitted to be visible. This was an interesting challenge, obviously.

‘Together with the sound team, I rigged a lot of shotgun microphones and hidden miniature omnis. I rehearsed the oath by having the guys in my sound team standing up and talking from each of the 250 chairs, writing down which shotgun or hidden omni for each chair sounded best. 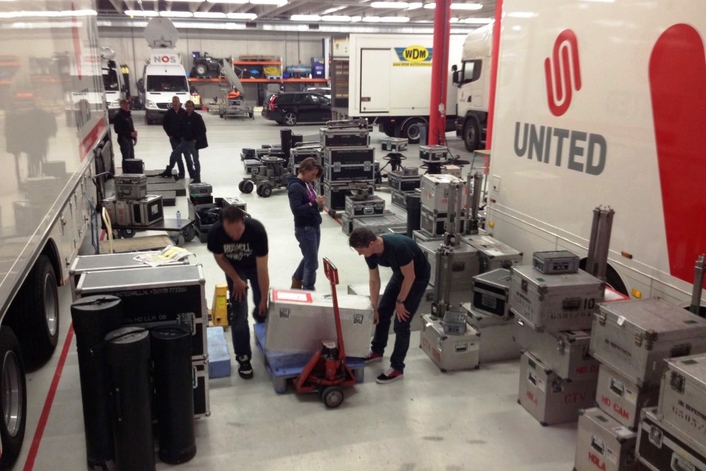 During this rehearsal we discovered some dead spots. I had brought an eight-channel radio receiver for this purpose, and we were able to cover the dead spots with lavalier mics on belt packs, which we gaffer taped to the back of some chairs.’

Later that day, a Royal Ball was held in Amsterdam’s Museum Square, where André Rieu performed along with many guest artists. Again the Lawo mc²66 (with additional hardware from ABS, Lawo’s rental partner company) was used to mix and record about 200 channels of audio.

Said to have cost €12 million, the royal succession attracted thousands of spectators to Dam Square and won long applause for the departing queen. It also drew royalty from around the world, including Prince Charles and Camilla from the UK, as well as princes and princesses from Denmark, Thailand and Qatar, and the notoriously shy Princess Masako from Japan. For the worldwide television audience, it was United and Lawo’s invitation to share the occasion.

About United
The Dutch production company United is located in Hilversum and operates nine state-of-the-art Outside Broadcast vehicles and mobile control rooms. Part of the huge Euro media Group that has production and post production facilities in Belgium, France, England, Germany, Italy and Switzerland, United provides vehicles to record major sporting events and live concerts all over Europe.