.
It wouldn’t be the Fourth of July without the “Boston Pops Fireworks Spectacular,” and Robert Juliat Cyrano followspots helped light up the annual event, which was televised live from the Charles River Esplanade.

“The event was a lot of fun to be part of,” says lighting designer Christopher Landy of Vibrant Design LLC.  “Summer shows like this one can be challenging because they start in the daylight and end at night, so you need to use spots that are able to compete with the sun.”

Landy utilized two Cyranos obtained from Capron.  “The talent looked great,” Landy says.  “The spots fields are perfectly even and consistent and they’re very easy to operate – Which is more important than you think.  It makes it easy to balance and easy for the operator and myself to subtly tweek levels.” 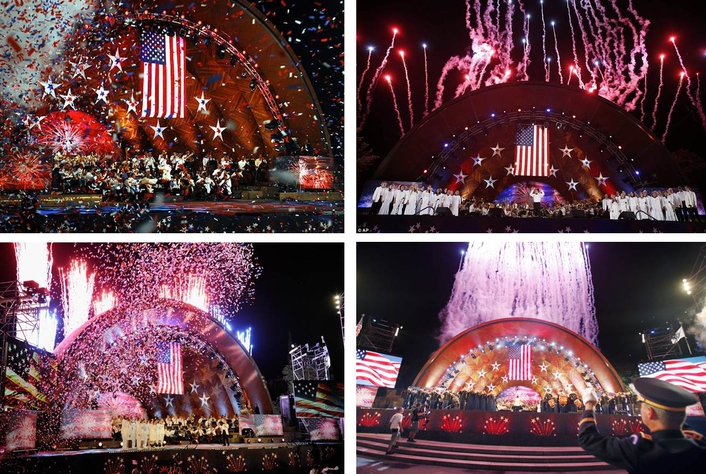 Landy reports that he uses Robert Juliat lighting exclusively these days – even on less spectacular shows.  “When I am lighting A-List talent, I need an A-List fixture Juliat provides that,” he says.  “The camera sees every imperfection and flutter, an inconsistent field is not an option.  In fact, on a recent comedy shoot, I had to swap out three competitors’ spots after the first day of taping.  They just weren’t cutting it.  With the Juliat spots it was like a new show.  Shows with Juliats equal happy clients”.

Robert Juliat is a three-generation, independent, family-run company dedicated to stage lighting.  The current chairman’s grandfather was, at the end of the 19th century, one of the pioneers in creating special effects for the fledgling motion picture industry in France.  Robert Juliat lights are used worldwide by customers who include the Cirque du Soleil, Celine Dion in Las Vegas, Disney World, The Royal Shakespeare Company, the Comedie Francaise, the Holiday On Ice tour, the Athens 2004 Summer Olympic Games and football’s World Cup in Japan and Germany.
R&D, production and the company headquarters are based in the village of Fresnoy-en-Thelle, 50 km north of Paris.  Robert Juliat USA is located in Wallingford, Connecticut.