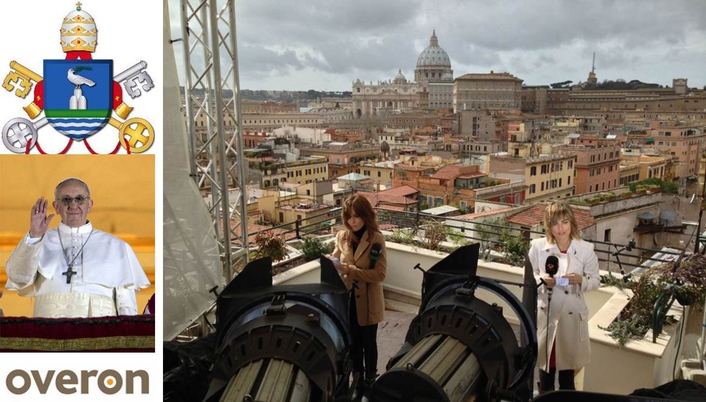 Overon had set up 12 live camera positions in some of the key sites around the city
Overon covered the conclave for the election of the new Pope for all the Spanish networks as well as high-profile international channels.

Overon provided comprehensive coverage of the election of the new Pope for a host of high-profile international channels with a 22-man team made up of producers, satellite operators, technical directors, sound technicians and camera operators. The team provided live coverage of the events from a TV compound with 5 simultaneous lines.

Overon’s coverage included a total of 12 stand-up camera positions in key locations such as the Piazza Pia, opposite Sant’Angelo Castle; in the Piazza San Pietro in the Vatican; and in Via della Conciliazione; and in a terrace at the Atlante Hotel, all featuring wireless cameras. In addition, it also built a set and a production studio. Since the 1st March, the number of live up-links has topped the 300-mark, a figure which reached the 400-mark for the official coronation ceremony on Tuesday 19th March.

Overon also covered the stepping down of Benedict XVI beginning with the official announcement on 11th February to his stay at Castel Gandolfo on 28th February.