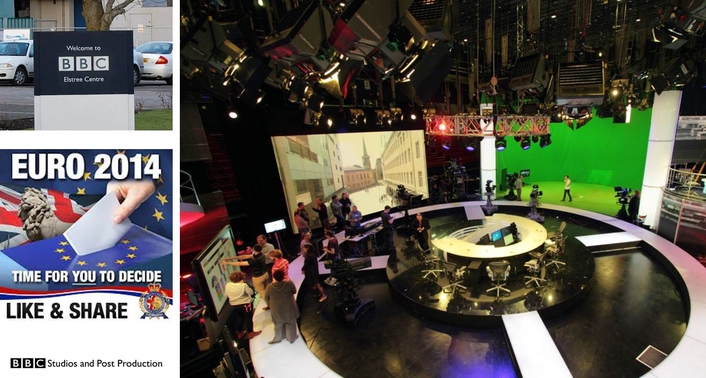 .
BBC Studios and Post Production is supporting BBC News’ local and European elections broadcasts from New Broadcasting House by delivering a series of live programmes from Elstree. BBC Studios and Post Production’s Elstree Studio D has been transformed with a brand-new virtual reality tracking system to enable Jeremy Vine to engage BBC viewers with his inimitable analysis of the full election experience.

Fronted by veteran Question Time presenter, David Dimbleby, and accompanied by a host of guest interviewees and commentators - including Jeremy Vine, Emily Maitlis and Nick Robinson - the 23 hours’ worth of live programming will air across BBC channels from 22 to 26 May.

BBC Studios and Post Production put a new infrastructure in place at BBC Elstree Studio D last year, including equipment redeployed from Television Centre, to meet the demands of large live event shows like BBC Children in Need 2013 – the biggest and most ambitious appeal show to date. The news elements of the elections programmes will be broadcast from New Broadcasting House harnessing the building’s core potential, while using BBC Studios and Post Production’s Elstree Studio D to scale up the broadcast capacity.

The Elstree Studio D facilities include a new virtual reality environment with a green screen set for Jeremy Vine. To enable Vine to be completely and virtually immersed with graphics and up-to-the-minute statistics, BBC Studios and Post Production is utilising brand-new virtual reality technology. Attached to the studio cameras, MoSys Star Tracker uses an upward looking camera that tracks random markers on the studio’s grid and sends positional information to a computer to render the correct viewpoint. This means that Vine can move around the green screen environment, without affecting the position of the virtual graphs and charts, to create a seamless and completely immersive viewing experience. 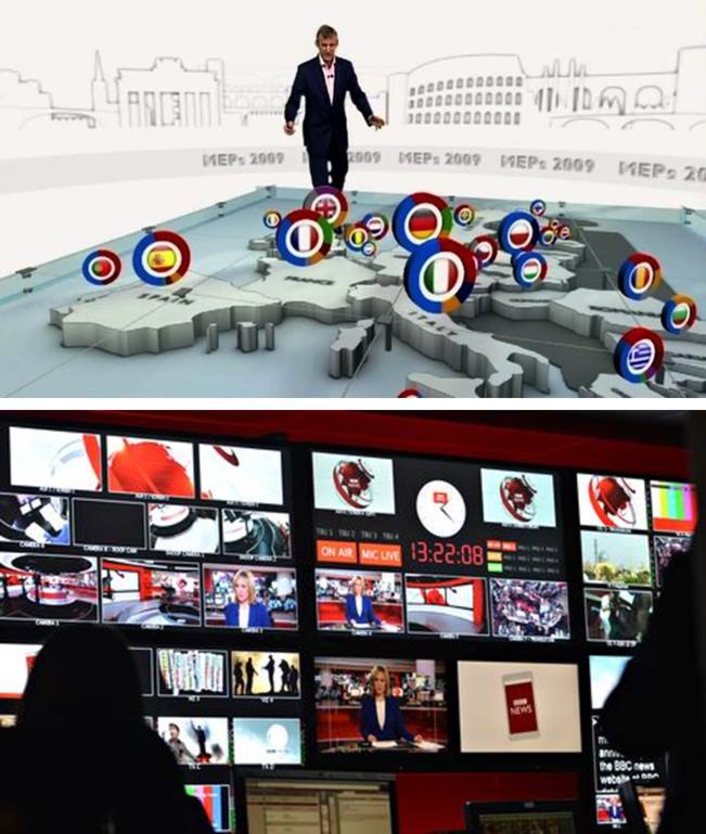 “We are delighted to be working with BBC News on this project. Providing studios, technical facilities and staff expertise for such a large scale and complex live event as the elections is the perfect showcase for BBC Studios and Post Production’s capabilities,” said Anna Mallett, CEO of BBC Studios and Post Production. “We’ve always been quick to embrace new technology, such as HD and then 3D, so to be using a new piece of virtual reality technology that will enhance viewing experiences is something that we’re all really excited about.”

The studio floor at Elstree will comprise a multi-camera set-up of 12 cameras, five of which are virtual reality capable. The centre of the studio will house David Dimbleby alongside the BBC’s political editor Nick Robinson and guests from the main political parties. Facing a wall of LED screens enables Dimbleby to interview politicians in their regions via a live video feed. Adding to the big screen, immersive experience, Emily Maitlis will be in front of a 103” interactive touch screen to provide the latest developments from each area of the country.

About BBC Studios and Post Production
BBC Studios and Post Production is a commercial subsidiary of the BBC, providing world-class studios, post production and digital media services. It works with media companies and broadcasters, making content for a variety of broadcasters - from Channel 4’s Winter Paralympics, ITV’s The Chase and Sky’s A League of Their Own, to BBC One’s EastEnders, Children in Need and Strictly Come Dancing.

Its award-winning Digital Media Services team preserves, re-masters and manages content through its digital archiving, restoration and distribution services, working with content owners like Imperial War Museums to conserve and maximise the value of their material. Credits include Dr Who, The Professionals and The Queen’s Coronation.