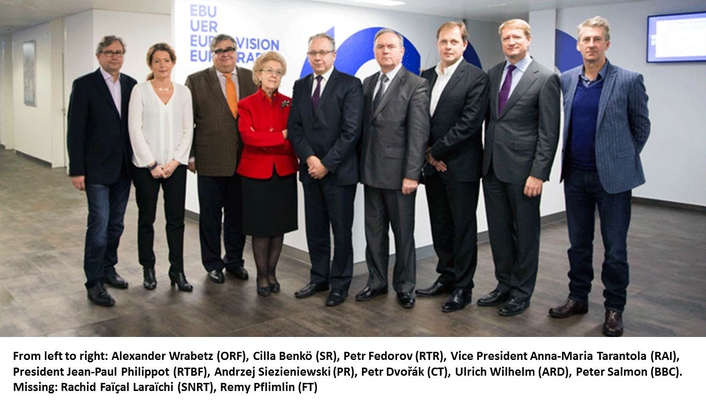 .
Members attending the 73rd General Assembly in Geneva have elected the remaining nine members of the EBU Executive Board which will lead the European broadcasting community for the next two years.

The fifth board will be guided by incumbent President Jean-Paul Philippot, (RTBF Belgium), who was re-elected at the Summer General Assembly in Naples along with Anna-Maria Tarantola, (RAI Italy), who replaces Claudio Cappon, (RAI Italy) as Vice-President. Mr Cappon is stepping down after seven years of service.

Petr Dvořák, who was made Director General of CT Czech Republic in 2011 joins the Board for his first mandate. The remaining eight members were re-elected from the outgoing Board.

Mr Philippot said the new board, which takes office on 1 January 2015 for a 2-year mandate, reflects the diversity of the EBU community, with high-level representation across the Membership.

A new vision for the future
In his report to the assembly, Mr Philippot thanked outgoing board members for their contribution.

The President said that the new Board’s priority would be to maintain a balance between achieving cost efficiencies while promoting improvement and modernization of services to the EBU community.

He said the organization’s new strategic orientation would focus on three key areas:
•    Lobbying for PSM in the 21st century
•    Creating added value and synergies for Members
•    Providing Members with more value for less money

"Today our Union and its spirit of solidarity are more necessary than ever,” Mr Philippot said. “In an increasingly difficult environment in which competitors and political pressures challenge our raison d’etre, we need our Union to actively and continually promote to decision-makers and our audiences, the distinctiveness and shared values of PSM  – universality, independence, excellence, diversity, accountability and innovation.” 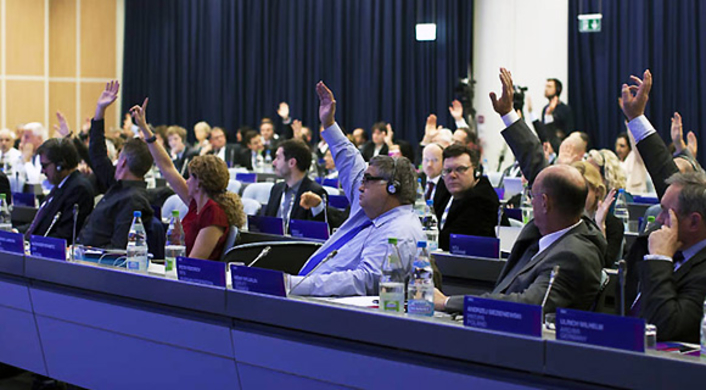 “The strategic plan for the Permanent Services arising from the VISION2020 process will allow us to better exploit this potential and I look forward to pursuing this with the (new) Board for the 2015-2016 mandate,” he added.

The EBU has 73 Active Members in 56 countries operating 913 TV services and 854 radio services broadcasting in 96 languages to a potential audience of 1.02 billion people.