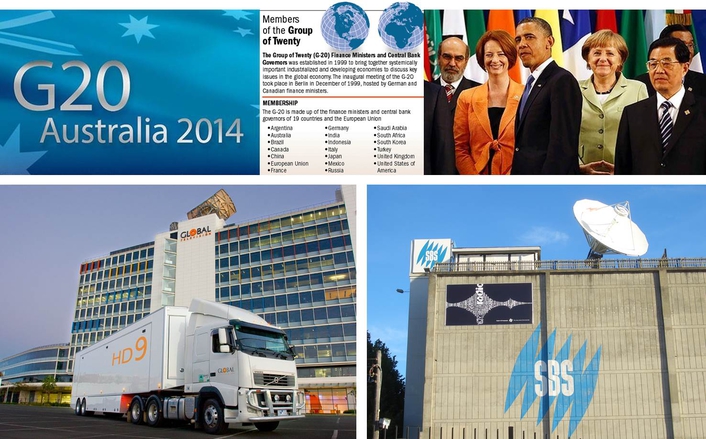 Global Television has been awarded the G20 Australia 2014 Summit Host Broadcaster contract
Following an international tender, Global Television has been engaged by the Australian Department of the Prime Minister and Cabinet for its expertise in delivering complex technical broadcast requirements for major international events – including CHOGM 2011 in Perth; the 2010 Commonwealth Games in Delhi; and, currently, the 2014 Commonwealth Games in Glasgow.

Global will work in partnership with SBS to produce content for the Host Broadcast feed, contributing newsgathering, international news resources, production and editorial expertise. SBS has more than 30 years of unique multicultural and multilingual broadcasting experience. SBS broadcasts more than 25 international television news programs each day, and 74 language programs across three radio networks – more than any other broadcaster worldwide.

Global Television will provide technical design, build and operational services – including equipment, satellite facilities and crew. A combination of traditional and emerging broadcasting technologies, such as 4G web streaming services, will be used to maximise the coverage.

Global will also engineer and operate the International Broadcasting Centre which will be located in the International Media Centre in Brisbane for the G20 leaders summit, where thousands of international media representatives will be based during the summit to bring commentary and news reports back to their home countries.

SBS will be producing multiplatform content throughout the G20 year, as well as covering supporting events of the summit, that will be delivered to the domestic and international media.

The G20 leaders’ summit in 2014 will be held on 15 and 16 November in Brisbane, Queensland. This will be the most significant meeting of world leaders Australia has hosted and will be an opportunity to showcase Brisbane, Queensland and Australia as a worldclass destination for tourism, education and business. As many as 4,000 delegates and 3,000 media representatives from around the world are expected to attend.

Global Television CEO Keith Andrews said: “The G20 Summit is a major international event for Australia. There are a complex set of requirements that need to be fulfilled. It allows us to further leverage our host broadcast capability to serve a multitude of broadcasters around the world.

“We are proud to be entrusted to deliver this historic event and look forward to showcasing Australia’s G20 Summit to the world.”

SBS Managing Director Michael Ebeid said: “This is a natural synergy that brings together the best expertise in broadcast technology from Global with the specialised production and editorial skills of SBS to make a solid Host Broadcast operation.

“SBS and Global have partnered on a number of successful large-scale events in the past, including World Youth Day 2008 and ANZ Netball Championship 2013 matches, and with our combined expertise we are in a position to deliver host broadcast services more relevant to a global audience than has ever been experienced before.

“We are thrilled to be involved with such a significant event; the G20 will be watched closely by the international community and provides an opportunity to showcase SBS as a symbol of the success of our rich multiculturalism.”

For the summit itself, Global will have more than 26 cameras at the main venue, with single and multi-camera crews at key locations around Brisbane.

About SBS
With a background as Australia’s multicultural broadcaster, SBS holds a unique place in the Australian media landscape. As described in the SBS Charter, SBS’s principal function is to provide multilingual, multicultural and Indigenous radio, television and digital media services that inform, educate and entertain all Australians and reflect Australia’s diverse society. We carry out this function through an ever-increasing number of distribution platforms including free-to-air television channels, subscription television, analogue and digital radio, online, and mobile devices and apps. SBS inspires all Australians to explore, appreciate and celebrate our diverse world, and in doing so contributes to a cohesive society.