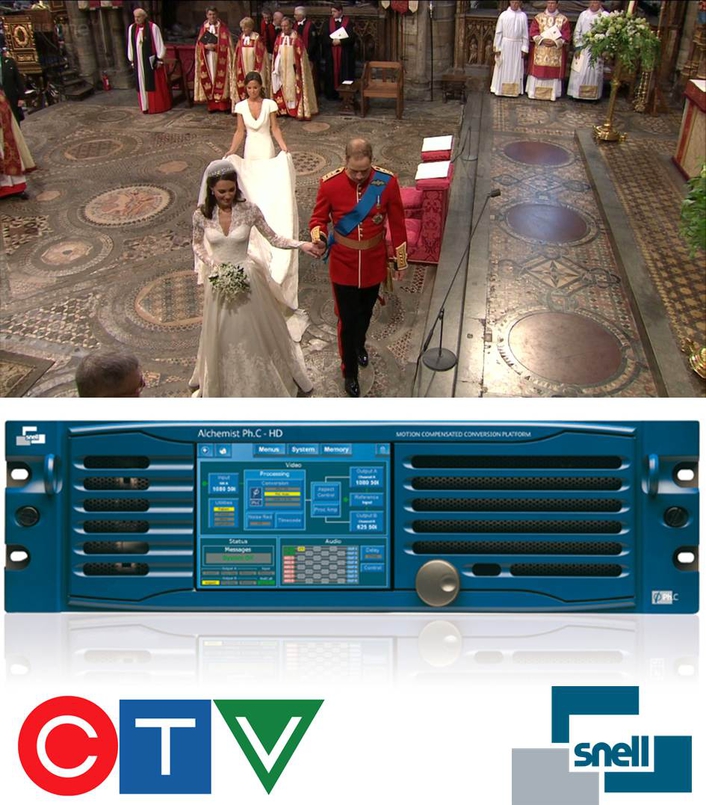 "The Snell Alchemist Ph.C – HD is well-known as the 'state of the art' in frame-rate conversion, and the solution consistently demonstrated superior performance and picture quality compared to other systems we evaluated," said Mark Weeres, senior technical manager for CTV's royal wedding coverage. "With the Alchemist units deployed, we know we achieved the highest quality frame-rate conversion with the fewest artifacts and highest picture quality."

For the royal wedding coverage, CTV deployed eight Alchemist Ph.C. – HD units at its main broadcasting center in Buckingham Palace. On the wedding day, the Alchemist units received live feeds in 1080 50i from U.K.-based broadcasters supplying pool coverage, and converted them to 1080 59.94i for delivery to CTV's OB vehicles and distribution to the Canadian viewing audience.

"Once again, the Alchemist Ph.C – HD has shown why it is the conversion system of choice for today's biggest names in broadcasting and television news, enabling them to overcome standards barriers for delivering high-quality HD content from remote sites around the world," said Paola Hobson, senior product manager, Snell. "With the Alchemist Ph.C. – HD, CTV was able to bring the royal wedding home to viewers in Canada with the highest-possible HD picture quality."

CTV is Canada's largest private broadcaster, offering a wide range of leading news, sports, and entertainment programming. It has the #1 national newscast, CTV National News with Lloyd Robertson, and broadcasts the top-ranked local newscasts in 11 of the 12 major Canadian markets, reaching more than 25 million viewers each week. CTV is also the #1 choice for prime-time viewing, and has been the most-watched television network in Canada for the past nine consecutive years.