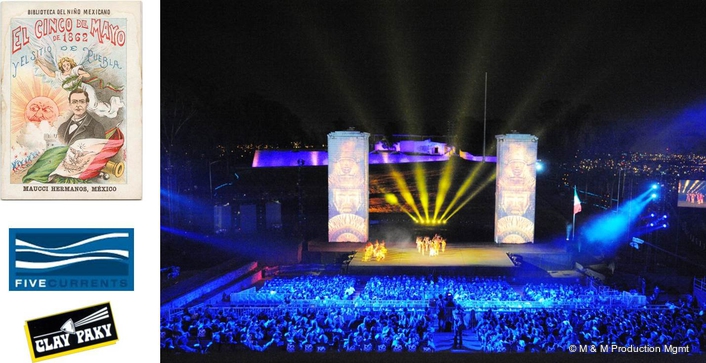 .
Clay Paky Sharpys took centre stage at the recent Espectáculo Conmemorativo, the 150th Anniversary of the Battle of Puebla, held at Fuerte Guadalupe in Puebla, Mexico. The site was the location of the 1862 battle in which the Mexican army defeated Napoleon's soldiers during the French invasion. The Mexican victory is celebrated yearly on the fifth of May, Cinco de Mayo.

To commemorate the 150th Anniversary, the Mexican government hired creative and production firm Five Currents out of Monterey, California to create an elaborate stage production at the site of the fort. Under Executive Producer Scott Givens, Five Currents managed a production like no other, complete with massive lighting, video, pyrotechnics and a cast of 2000.

Lighting Designer David Grill of David Grill Associates Inc. specified 44 Clay Paky Sharpys, with 20 lined directly behind the stage, providing a backdrop for both guest speakers and artistic segments, while allowing a view of the fort hilltop in the background. The remaining Sharpys were used to frame the headline talent stage, which was used to showcase artists including Chayanne, Espinoza Paz and Marc Anthony.

The main stage hosted three acts, each with a completely different look. Act One told the love story of Princess Iztaccihuatl and the famous warrior, Popocatepeltl, and how their tragic death led to the landscape of Puebla. During the tribal dance, the Sharpys provided a fiery background. “I’m very impressed with the power and luminosity that comes from such a compact fixture,” says Grill. 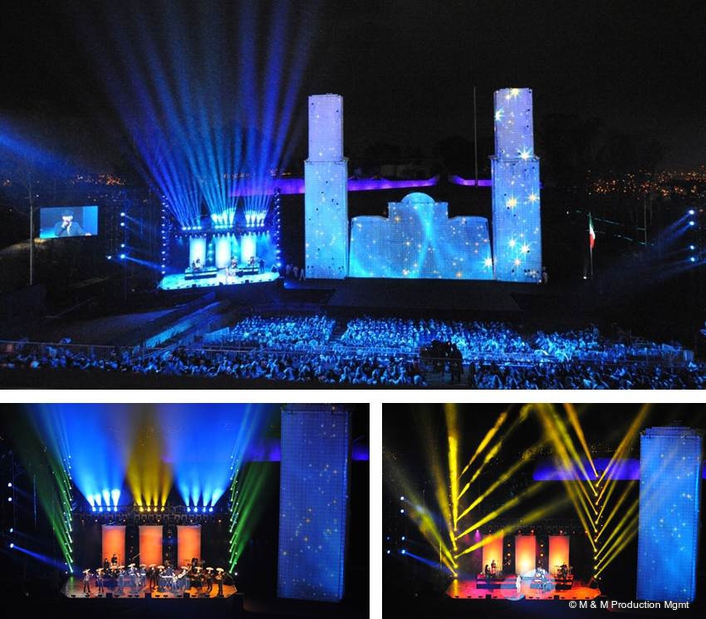 Pro Rig out of Dallas, Texas built the complex stage in which the middle section tilted up to a full upright position from ground level in Act Two, allowing aerial acrobats to perform on the vertical wall with projection from ETC London/Paris.

Act Three involved a cast of 1200 volunteers with candles creating images on the hillside including a dove, the name “Puebla” and “5 de Mayo” to a standing ovation.

The Sharpys ruggedness was definitely put to the test in the environment, which included dust, volcano ash, rain and lightning on a nearly daily basis. Technical Director Ola Melzig said, “We had significant problems with dust and ash, but the Sharpys were very resilient.”

Francesco Romagnoli, Clay Paky Area Manager for North and Latin America, adds, “This is very special day for Mexico and we are very happy that the Sharpy could play a role in helping the country celebrate. The show looked magnificent and we’re proud we could be a part.”

The show was streamed live on the internet and broadcast live by Grupo Televisa S.A.B. to a worldwide audience of approximately 300 million viewers. The consensus of organisation committees was that the event was yet another victory for Mexico.