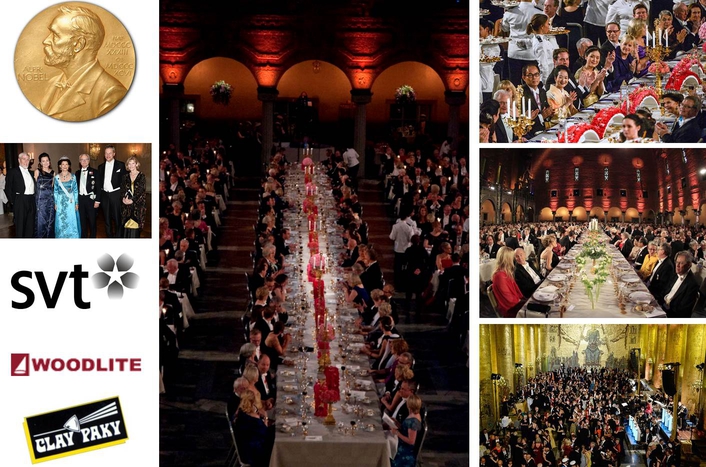 .
On December 10, 2014, Clay Paky joined the elite crowd of guests at one of the highest profile events in the world – The Nobel Prize Banquet. Held annually in the Blue Hall of Stockholm City Hall since 1934, the banquet immediately follows the prestigious Nobel Prize Awards. The event is attended by the King and Queen of Sweden and the other members of the Royal Family, plus approximately 1300 guests, including Nobel Laureates, politicians, dignitaries and other VIPs, as well as seen by the viewing audience of a High Definition television broadcast by Swedish Television (SVT). No tickets can be bought; all guests are invited by the Nobel foundation.

Lighting Designer Per Sundin integrated 18 Clay Paky Alpha Profile 800 ST fixtures for the event, supplied by Woodlite. He knows the layout of Stockholm City Hall well, having designed for the event many times in the past. “These were my first choice – the event is not one full of hundreds of movers. The lighting must be subtle and beautiful and the Alphas were perfect.” 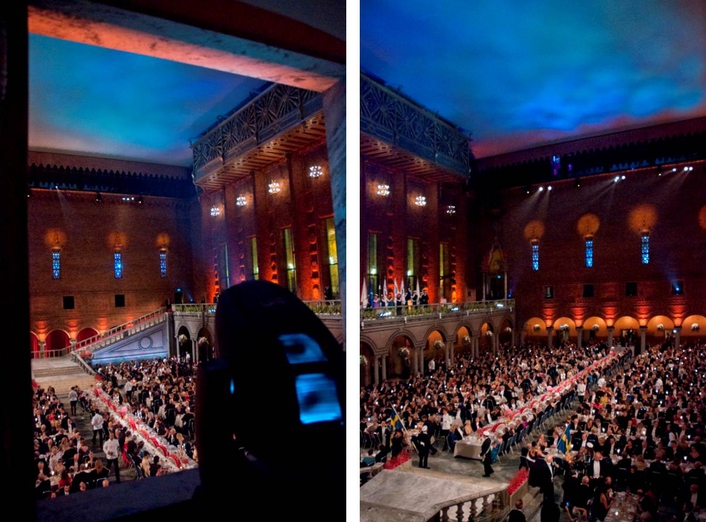 Sundin has been a lighting designer since 1989 and has designed for some of the world’s largest TV shows including the Eurovision Song Contest (5 times), Nobel Prize Foundation since 1996, Royal Events in Sweden and Saudi Arabia and world-renowned film director Ingmar Bergman, plus architectural installations worldwide and commercial clients including Formula One and Coca Cola.

Sundin describes the architecture of the Hall: “The Blue Hall’s fantastic architecture is portrayed as a covered courtyard with unplastered brick walls. The hall’s initial architectural drawings showed the walls plastered and painted blue to give the room a colour scale that suggested proximity to the water, but the architect Ragnar Östberg repented during the construction phase when he saw the beautiful red brick. To give bricks a little extra ‘structure’ he let hammering surface. The name Blue Hall was already established, and has endured ever since”.

“The hammered red brick eats light and is in general reflecting warm colour tones which make all dinner lighting mainly go into warm lighting, accompanying the candle lighting on all of the tables. The Blue Hall ‘covered courtyard’ has a white painted fabric-covered ceiling, which is a perfect spot to make clear blue sky as a contrast to the warm brick wall. Just during the three divertissements is doable using blue light to imagine how it could look if it had been plastered and painted blue.”

He continues, “Lighting design for the Nobel banquet and the architecture of Stockholm City Hall demands discrete rigging and compact, silent and efficient tools so this year have I chosen Clay Paky Alpha Profile 800 ST as the main tool to ‘paint’ the hall with, a powerful and silent fixture which blended perfectly into the scene. It was appropriate to have Italian lighting present, which thrived along with the wonderful and thousands of flowers, which since the 1970s, been delivered by the Italian city of Sanremo, where Alfred Nobel lived the final years until his death. The lighting was also designed to be an elegant compliment to the entertainment, which featured excerpts of works performed by The Royal Swedish Ballet. I’ve done this event for eighteen years now and we’re able to create a completely new atmosphere each year through lighting. Alfred Nobel would be proud.”