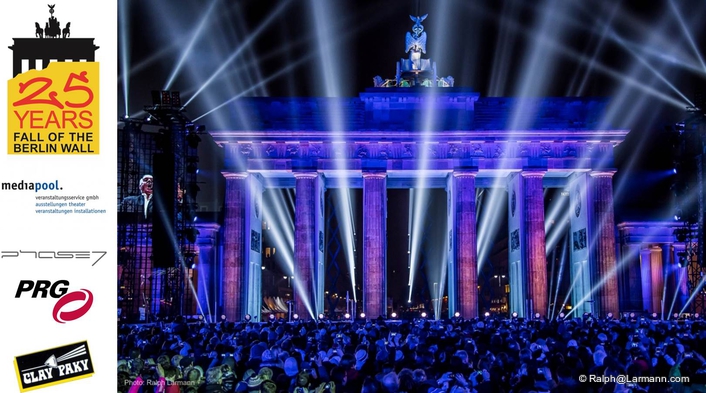 .
Lighting designer Björn Hermann has created a spectacular light show at Berlin’s Brandenburg Gate to launch a night of celebrations commemorating the fall of the Berlin Wall 25 years ago. Choosing to use a mix of Clay Paky SuperSharpy and Mythos fixtures, Hermann delivered a high impact and emotive display that could be seen for miles around. 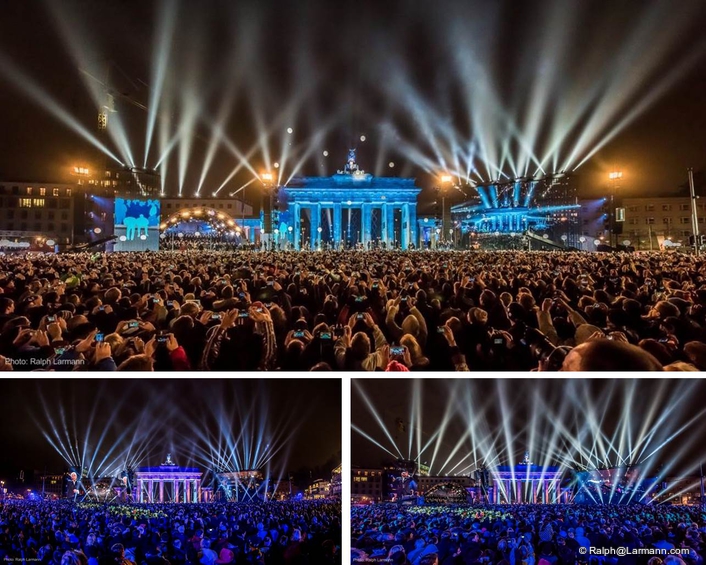 “I was keen to ensure that the impact of the Brandenburg Gate was not obscured or upstaged by the lighting technology we were using as I saw it as the star of my lighting design,” explains Hermann. “I was keen to achieve a three-dimensional lighting effect from either side of and within the gate. I built the look up using the different heights and perspectives of the buildings around. This is where the SuperSharpy and Mythos were fundamental to my design – they are such hugely powerful fixtures I could light the gate itself at the same time as projecting through it into the night sky.”

Hermann’s concept also saw five 13 metre high freestanding towers from which the SuperSharpys projected a plethora of parallel beams through the historical structure, adding another level to the design and symbolising among other visual evocations the sun rising behind the Gate.

“Thanks to the relatively compact size and low weight of the Clay Paky fixtures, we were able to pack the towers with SuperSharpys,” says Hermann. “Their size also meant they were very discrete and couldn’t be seen by the public or the TV cameras, plus their minimal power consumption helped lower our costs.”

The fixtures’ range of exciting effects and high output also offered Hermann a great deal more for his budget then if he had used classic 7K Space Cannon. “I used all the features including the CMY mixing, the blur (Freeze Mode) and gobos. However even without all the functions the lamps are perfect as they are.”

Mythos is a highly advanced hybrid that is both an excellent 470 watt-lamp spotlight with a zoom range from 4° to 50° and an extraordinary beam light that allows designers to switch to a minimum fixed beam angle of just 0.5°. It also features a completely redesigned indexed visual effects disc, which can now be super imposed on all the gobos, both in and out of focus. The SuperSharpy is three times brighter than the ever-popular Sharpy, reaching never-before-seen mid-air distances, with a plethora of built-in gobo wheels. 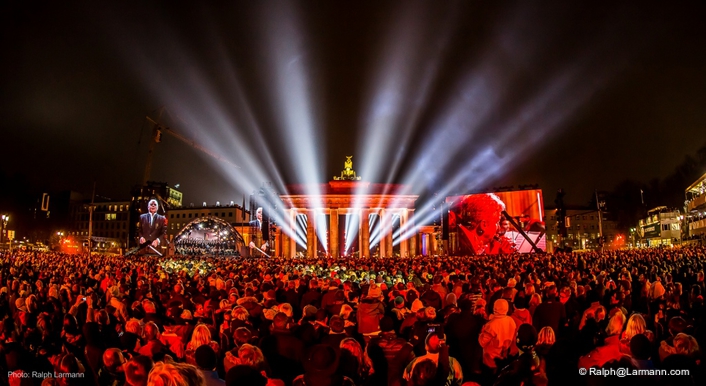 Hermann worked alongside a close-knit team of suppliers and production houses to ensure the success of the prestigious event.  “I am extremely proud to have been able to light the celebration of such a momentous event that has not only attracted worldwide attention but directly affects me as a German citizen," Hermann said. "The excellent relationship between all those involved has made it a very rewarding experience. From the event producers mediapool event services and show producers phase7 to the delivery of top technical service from PRG alongside my own top team of technicians and engineers, everyone did an amazing job and made the project a very memorable one to work on. We were also delighted to have excellent technical support from Lightpower and MA Lighting." Lightpower is Clay Paky’s distributor in Germany.