.
TVSUD is a local French television channel, founded in 2011, which broadcasts across the cities of Nimes, Montpellier and surrounding areas. As well as programming on news, culture and local interest stories, the channel also broadcasts live events. In order to produce broadcast quality content, for both live reports and content for pre recorded items, TVSUD’s technical team relies on a compact flyaway kit built around a Blackmagic Design broadcast workflow.

With a reliable mobile broadcast unit in place, the technical team is constantly innovating with its broadcasts, in order to produce engaging and illustrative content to give an inclusive feel to the programming; a critical element for regional broadcasters. At the end of 2013, TVSUD was responsible for the broadcast of ‘Le Grand Defi: construisons ensemble le territoire de demain’, a two hour live economic event hosted by the Chamber of Commerce and Industry (CCI) of Montpellier. The event presented and debated future visions of the Montpellier territory, and how it should be developed for successful economic growth. To give viewers a greater sense of the speakers’ proposals, animations mapping out how the developments could change the face of the region were intercut into the programme.

“We filmed the event in 1080i25 with four cameras, and took the feeds, together with two playouts, into the ATEM 2 M/E Production Switcher. We then mixed the programme’s line cut on the ATEM 1 M/E Broadcast Panel, using the playout signal from a Mac mini, connected via an UltraStudio 3D I/O card, to cut to programme animations and graphics,” explains Fabien Lenoir, technical director, TVSUD.

For the conclusion of the presentation TVSUD decided to take this one step further, and at the end of the show, created an augmented reality sequence, with the presenter interacting with 3D graphics overlaid on the wide angle camera shot. As well as statistics on job creation numbers, a 3D train raced across the stage in front of the presenter, as well as a large 3D globe, which the presenter could ‘spin’ to show how the region could make a significant contribution to the global economy. 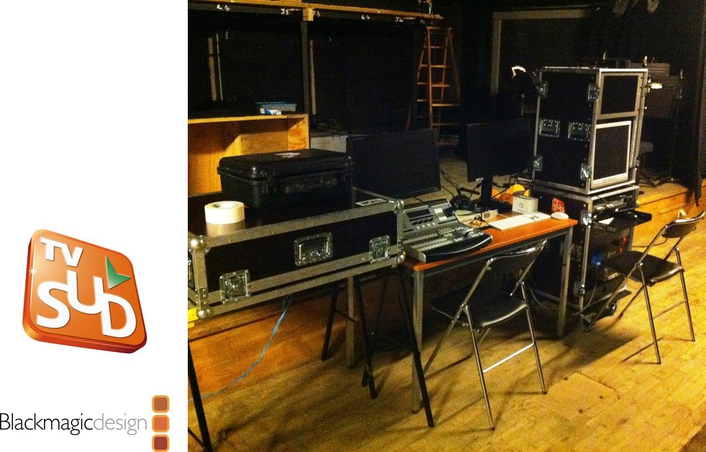 The team used CasparCG broadcast playout software on a Blackmagic Design Decklink capture and playback card to feed the graphics into the vision mixer. TVSUD worked with the team who had created the 3D video to export a Quicktime video with an alpha layer, so the key and fill of the DeckLink capture and playback card could be used to make a linear key to output the graphics simultaneously with the HD feed from the wide angle camera, effectively ‘projecting’ the graphics onto the stage.

“The presented proposals would have a huge impact on employment and business growth, so we wanted to ensure viewers had a strong visual payoff at the end of the programme,” explained Fabien. “We rehearsed with the presenter before the event and had a monitor on stage, to ensure he knew exactly where to stand to get the right effect for the broadcast. Blackmagic’s I/O cards enable us to integrate the graphics smoothly into the ATEM, and the panel made it very simple to produce the TX feed.”

Blackmagic’s ATEM production switcher output a feed to a series of big screens at the venue via a video projector, and to an external encoder, so that it could be streamed for online viewing via the CCL website. A second output feed was recorded in ProRes 422 using a HyperDeck Studio broadcast deck. The programme was then edited and broadcast on TVSUD.

“The variety of content we have to produce is immense, from short items for our magazine news programmes, through to live outside broadcasts, so we needed a mobile unit that is reliable and flexible to our needs,” concludes Fabien. “The Blackmagic Design kit gives us a really compact set up, which enables us to capture what is happening across the region quickly and without time consuming set ups. And because we know that we can rely on our kit, we have the opportunity to test out new ways of enhancing our programming with the very latest broadcast technologies to help engage our viewers across the region.”