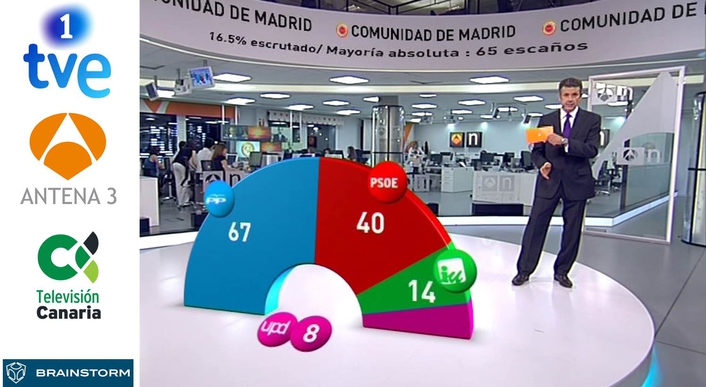 Three major TV stations rely on it for the most important moment of the year to date
Three major Spanish broadcasters, TVE1, Antena 3 TV and Televisión Canaria, have once again opted to rely on Brainstorm Multimedia to cover the upcoming regional elections which are due to take place this Sunday, 24th of May.

The focus of the election projects for this crucial event is on Brainstorm’s applications and solutions for virtual studios, augmented reality and 3D real-time graphics based on the Infinity Set, eStudio and Aston 3D respectively.

The Television Canaria project, managed by the production company Videoreport Canarias, has tasked Brainstorm with the responsibility of showcasing the election results. A combination of Infinity Set, an award-winning virtual set solution, and the Aston 3D, the high-end creative design, CG and playout system, form the core of the products and services being used, allowing Television Canaria to broadcast the most advanced real-time 3D graphics currently available on the market. In addition, Brainstorm’s on-site team in Tenerife will manage all incoming data streams, minimizing processing times and allowing real-time updates.

Others from Brainstorm’s Production Services Department are also embedded in Antena 3 TV in Madrid which is one of the largest broadcasters in the country, in order to ensure their augmented reality requirements are met with the highest standards that Aston 3D can offer. To maximize performance output and to enhance the visual impact of the election program, Brainstorm has provided Antena 3 TV with a sensorized Mo-sys crane and a Vinten tripod which allow for camera movements to seamlessly co-exist with 3D graphics.

As for TVE, Spain’s national broadcaster and long time user of Brainstorm’s products and services, eStudio has been chosen as the best option for their election graphics requirements. And to complement the Infinity Set virtual studio application, Brainstorm is integrating the NCAM, a new tracking system based on image recognition that allows for any camera movement imaginable.

“Our on-going relationship with Spanish broadcasters has been a long and enduring one. Both TVE1 and Antena 3 TV have always relied on us and our products for key events such as these elections. At this very busy time of managing multiple election projects, Brainstorm Multimedia is once again proving that professionalism is our defining feature as we have done so year after year”, says Monica Victor, Production Services Director at Brainstorm Multimedia.

About Brainstorm Multimedia:
Established in 1993, Brainstorm Multimedia provides industry-leading virtual sets and real-time 3D interactive graphics solutions for all broadcast graphics types and workflows as well as for feature film production and 3D real-time presentations. Brainstorm’s customer list includes many of the world’s leading broadcasters plus a large number of small and regional stations.