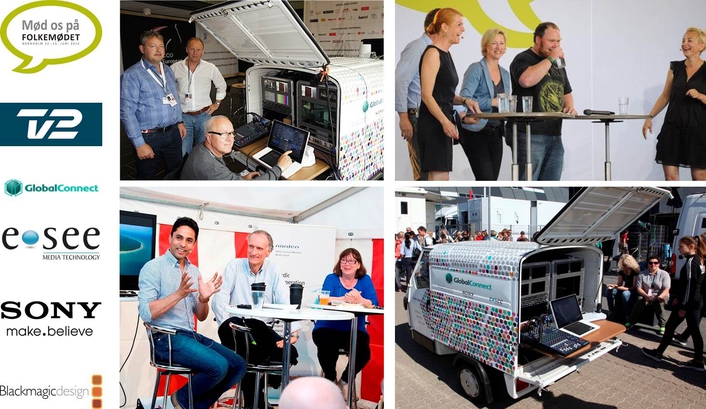 .
Getting the public engaged in politics is a major challenge in any country, however, Denmark takes a simple, yet effective approach to encouraging political discourse. Each year, The People’s Meeting (Folkemødet), a four day political festival takes place on the island of Bornholm. High ranking members of each political party, mayors, councillors and government ministers give speeches and take part in live, open air discussions on public policies with more than 11,000 members of the public. The events are not only screened to the meeting’s audience on the island, but are also broadcast live in HD on TV2, one of Denmark’s public service television channels.

TV2 hired a mini OB van, nicknamed OB-Van-Kenobi, from GlobalConnect, Denmark’s fiber network provider, containing a full live production workflow from Blackmagic Design. “The OB van might be small in size, but the Blackmagic hardware ensures that it is more than a match for the larger outside broadcast vehicles in terms of quality and reliability,” explains Birger Hauge, head of public affairs, GlobalConnect. “Of course, the van’s smaller footprint meant that we could pitch ourselves really close to the staging area, giving the production team a great feel for the atmosphere and how the public was reacting to the various political viewpoints.”

OB Van Kenobi is equipped with a Sony AWS-750 Anycast production solution and six Sony BRC-Z330 HD PTZ cameras. If necessary, it can be upscaled to use a total of eight HD cameras. In addition, the van has four wireless receivers and four matching transmitters; and for each camera there is a dedicated monitor. To fulfill GlobalConnect’s requirements, the OB van is also equipped with a separate preview and program screen. For convenience, the OB van’s equipment can be dismantled for use elsewhere: for instance. 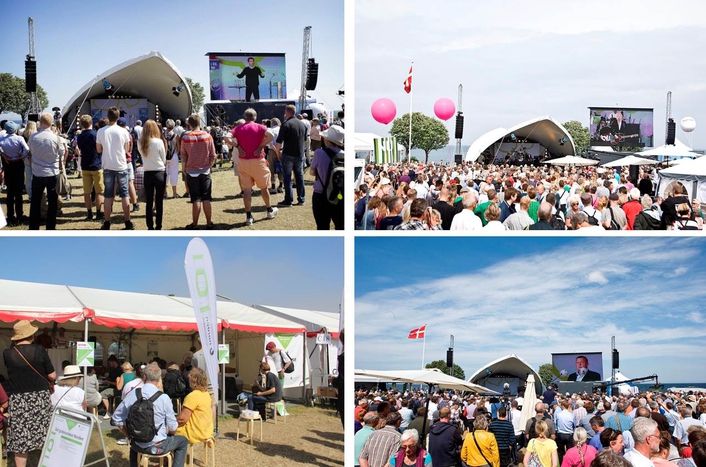 Three HD cameras, both fixed and shoulder mounted, captured the debates from the stage and in the audience, with SDI runs feeding the camera outputs into a video rack containing an ATEM 1 M/E Production Studio 4K. Lower thirds graphics and titling are added into the media pool, enabling one of the team to produce the program mix from the back of the van. “The ability to add professional touches such as lower thirds credits directly from the van, means that not only can we ensure all politicians are identified to the viewers, but also that the content matches TV2’s broadcasting standards,” explains Birger. “We also had two HyperDeck Studio Pro broadcaster decks on board; one is used to capture the program mix, and the other captures each of the isolated camera feeds, so that additional material can be added to future versions of the broadcast, for example, highlight packages or updated web content.”

A SmartView Duo and SmartScope Duo are also fitted in the OB van, which helped the production team keep signals and content monitored throughout the live broadcast. “Although it is a small production team for the van, it is still a limited workspace, so everything has to be accessible from one seated position at the back of the van,” explains Birger. “The monitors provide all of the information the switcher operator needs to keep production values high.”

An optical fiber connection was used for the live stream, to connect to Denmark’s high speed fiber network. “The Danish fiber infrastructure does not only facilitate fast, reliable online streaming, but it also provides a direct connection to national and international broadcasters,” continues Birger. “As part of the onward workflow, we use a fiber based broadcasting solution, which enables us to connect wherever we are, even when several production teams are all wanting to broadcast simultaneously from a small island.

“Through our subsidiary company GigaConnect, we are linked to every event location or stadium using our 10 Gigabit network; and we are experiencing an increasing interest in OB productions close to our fiber points,’ said Birger Hauge, Head of Public Affairs at GlobalConnect. He added, “We wanted to use 4K equipment in the OB van from the beginning; but that would demand a full 4K production chain to produce live 4K TV, which is not yet in place. Our standards are high, and we intend to convert the production to 4K as soon as possible.”

“Blackmagic Design has helped to broaden the broadcast perspective, as the equipment makes high quality live production so much more accessible for events and production teams irrespective of their budgets,” concluded Birger. “Because of the higher quality of content that can be produced, the coverage has the production value that is essential for national broadcasters, in turn opening up the events to a wider viewing audience. For political events such as The People’s Meeting, this is a critical element for helping to build awareness and encourage active participation in public policies that affect an entire population.”