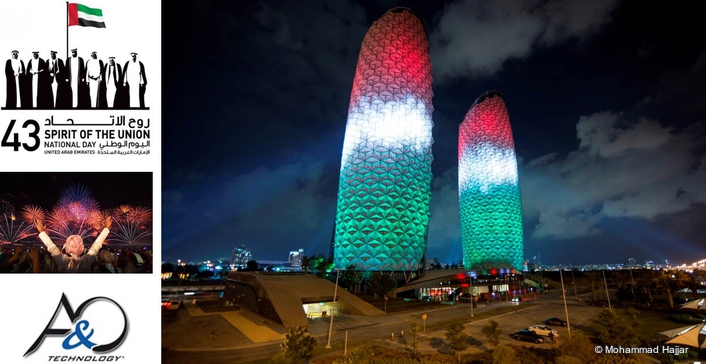 .
On the occasion of the 43rd National Day of the United Arabic Emirates, A&O Technology as general contractor with its creative department, A&O Creative, staged an impressive multimedia show at the Al Bahr towers in Abu Dhabi.

Anyone whose eyes were directed towards the Abu Dhabi skyline during the festivities, which lasted several days, could not have failed to notice the city’s magnificent twin towers, which were bathed in brilliant, changing colours. As general supplier, A&O Technology realized a dynamic, colourful 360° illumination of the Al Bahr towers. The company’s creative department, A&O Creative, used intensive colours to draw all eyes to the cocoon-like architecture. The futuristic towers were transformed one moment into a huge national flag, then bathed in a deep, marine blue that gave way in turn to shining white. A video projection on the façade complemented the light show. In whatever raiment they appeared, the evening choreography transformed the towers into dazzling highlights of the Abu Dhabi skyline.

To provide a homogeneous illumination, FALCON CMY LED VIDEO and SKY FALCON ARC colour 1200W were stationed all round the towers. For the video projection, high powered projectors were used. This was not the first time that A&O Technology had illuminated the twin towers, having done so also for the National Day celebrations in 2012. The Al Bahr towers accommodate the headquarters inter alia of the Abu Dhabi Investment Council and the Al Hilal Bank. 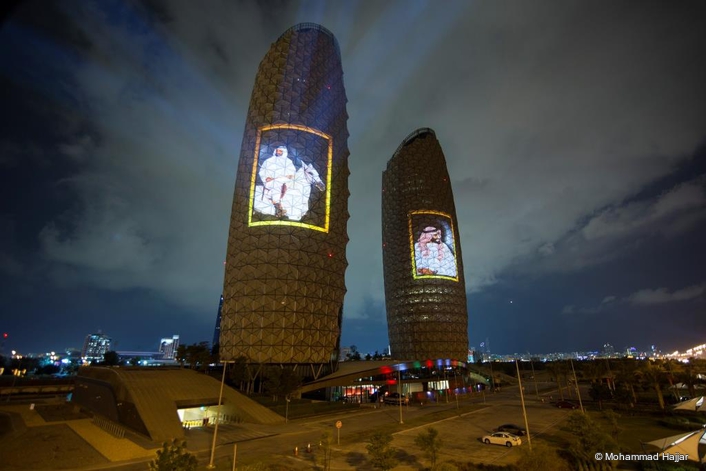 About A&O Technology
For almost twenty years, A&O Technology has been providing regional and international support for even the most demanding projects in the field of architectural or events lighting: from the supply of equipment – whether sale or rental – to the elaboration of creative concepts, to the provision of full-service support in the role of general contractor.
The clear division of the company into sales, rental, creative and manufacturing departments guarantees customers communication backed by expertise and efficient solutions at every stage of a project.
A large network of tried-and-tested partnerships is available to support your projects.
The company’s exclusive distribution portfolio includes the FALCON® range of architectural luminaires and searchlights manufactured by the A&O subsidiary alpha one.
A&O Technology has its headquarters in Bremen, Germany, as well as subsidiaries or bureaus in the UAE, USA, Russia and Asia and holds project partnerships worldwide.