Alfacam Covers the GCC Summit 2012 in the Kingdom of Bahrain 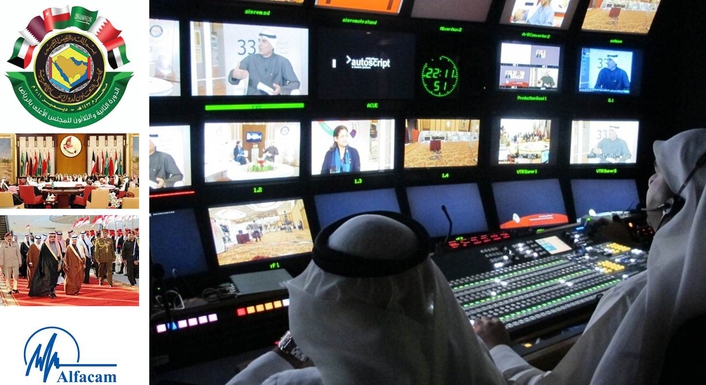 .
The Gulf Cooperation Council (GCC) Summit took place on Tuesday 24 December 2012 in Manama, capital of the Kingdom of Bahrain. As one of the main political events in the Middle East region, the summit was broadcasted in several territories around the world. Alfacam was chosen by the Information Affairs Authority of the Kingdom of Bahrain to facilitate the coverage of the Summit which took place in the Shakir Palace of Manama.

Alfacam is a Belgian company delivering services to TV stations and production houses. This year the Information Affairs Authority of the Kingdom of Bahrain decided to choose the Belgian company to cover the summit. Alfacam was present on 24 December in Manama and covered the 3 main locations of the summit: the Shakir Palace, the Shakir Airbase and the Media Center at Gulf Hotel.

In order to cover the GCC Summit in HD quality, Alfacam equiped the locations with high quality technical facilities. A total of 3 HD OB vans (OB 28, 35 and 40), 2 Assist trucks (A 14 and 23), 30 HD cameras and 50 staff members carried out the production of the summit in high definition.

Alfacam is extremely proud of being selected for one of the main political events of the Middle East region. The Belgian company wants also to thank the Information Affairs Authority of the Kingdom of Bahrain for the confidence they had in its services and abilities to provide a high quality product.

Alfacam Group [EURONEXT Brussels: ALFA] groups the activities from Alfacam, EuroLinX and Euro1080 (EUROCAM MEDIA & FILM CENTER & HD1).
Alfacam primarily delivers services to TV stations and production houses and with 22 HD production vans the company comprises the largest HD OB fleet in Europe. Alfacam undertakes more than 3000 assignments each year, including all Games since 2002 (with 19 OB vans in Beijing 2008 and in Vancouver 2010), the European Championships Football and the  Football World Cup (for instance South Africa 2010), the Europe Music Awards and the FIFA Confederation Cup Football. More than 95% make use of HDTV technology. Alfacam also undertakes 3D recordings across a range of content from concerts to sports (for instance ROLAND GARROS tennis, box, cricket, football/soccer).
Eurolinx is the sister company of Alfacam, offering wireless services to TV stations and production houses.
Euro1080 regroups the play-out services for TV stations, 16 studio’s (for television, film, event) and a « business center » (Eurocam Media Center/Eurocam Film Studios) and a catalog of cultural content in HD, « HD1 ».