Adlib Sounds Out the Giants 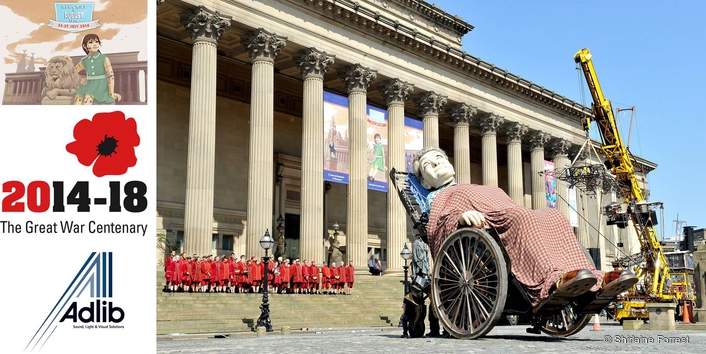 The cast & crew prepare for the show start
Adlib was again right at the core of the action for four days of amazing public theatre that saw the return of the Royal De Luxe giant marionettes to the city for a weekend of fun, history, poignancy and superlative entertainment.

The show “Memories of August 1914” was devised to commemorate the centenary of the start of World War 1 - in the process highlighting the heroic Liverpool Pals who answered Lord Kitchener’s call for volunteer recruits - and pulled an estimated one million people into downtown Liverpool for one of the most successful ever public arts events staged in the UK. 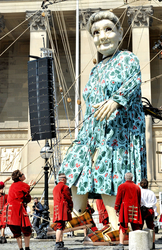 The different sites all accommodated large crowds between 10,000 and 40,000 people who needed to hear the performance soundtrack clearly from all positions as the Giants moved around the city following a carefully choreographed route … unfolding their story.

It was, a vast logistical operation for Adlib, which was co-ordinated by Director Phil Stoker and involved 16 Adlib technicians. Stoker worked closely with the event’s Technical Manager Stu Stalker and Production Manager Jonathan Sims.

The various audio systems – all based around L-Acoustics or Coda elements - were co-designed by Adlib’s Tony Szabo and Royal De Luxe’s Sound Designer, Stephane Brosse.

The seven sites were St George’s Hall, Newsham Park, Mann Island, Canning Dock, Clarence Dock, the Metropolitan Cathedral and the Queensway Tunnel, and very often the systems were de-rigged from one and had to leapfrog ahead of the procession to being set up in the next location! 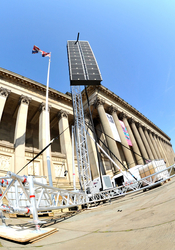 At Newsham Park, one of the largest sites for audience numbers, attracting crowds of around 40,000, Adlib installed two hangs of L-Acoustics K1, with 10 speakers per hang flown off 40-tonne tower cranes and more Lake / Soundcraft control.

Clarence Dock was catered for with another K1 system on cranes and attracted? another 10,000 people or so.

For the three sites at Mann Island, the Metropolitan Cathedral and Queensway Tunnel, all the PAs were deployed on the back of two flatbed Hiab crane trucks for quick deployment. They arrived on the sites and elevated the PA arrays just ahead of the Giants arriving to play out their scene.

These Hiabs were each loaded with 12 x Coda LA12 speakers, complete with Soundcraft SI compact mixers.

In all cases the audio signals from the music / band truck accompanying the giant marionette cast of three characters – the Little Girl, the Grandmother and Xolo the dog - as they moved around town were beamed via RF link over to the Adlib systems at each of the stopping points.

For the finale at Canning Dock, the entire Waterfront was closed and the Giants moved onto the water in boats, which sailed off down the Mersey River in a wave of smoke and emotion for the highly dramatic show end. 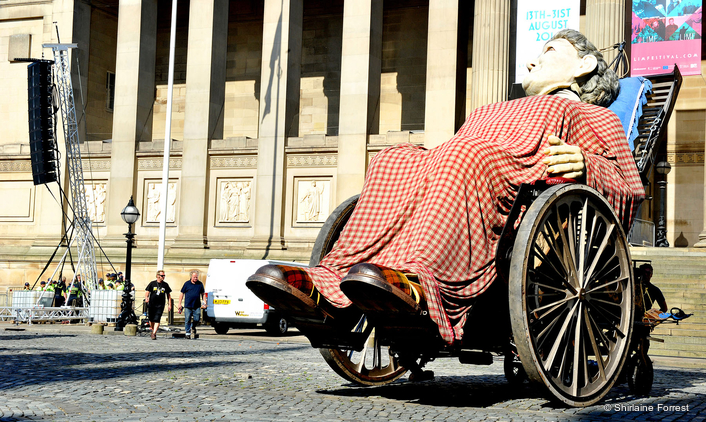 The Canning dock entailed a fast set up of a hang of 20 deep K1 from a 3 axle mobile tower crane and then hung at the edge of the water so, it would throw across the water to the road, (which entailed 100m to the first person & 130m to the last person) that was just directly in front. The side coverage was 180m to the first person. This had to be done and ready in 4hrs from the crane arriving on site to the Giants performing! The soundtrack was mixed through one of Adlib’s DiGiCo SD10 consoles. 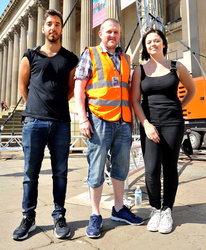 Phil Stoker states, “As a Liverpool company, we were all extremely proud to be part of this event which did so much to capture the public imagination and I’m sure inspire many people who might not go to a conventional theatre show … to be part of the performance”.

This was in terms of the sheer timescale needed to build the systems and de-rig them in time to travel to the next site, re-rig, line check and be ready for the procession again.

“Our crew were fantastic as always and really embraced the unique atmosphere, spirit and community of the occasion,” he says. “We could all appreciate what an historic opportunity it was, to assist people in enjoying the City and all it has to offer”.