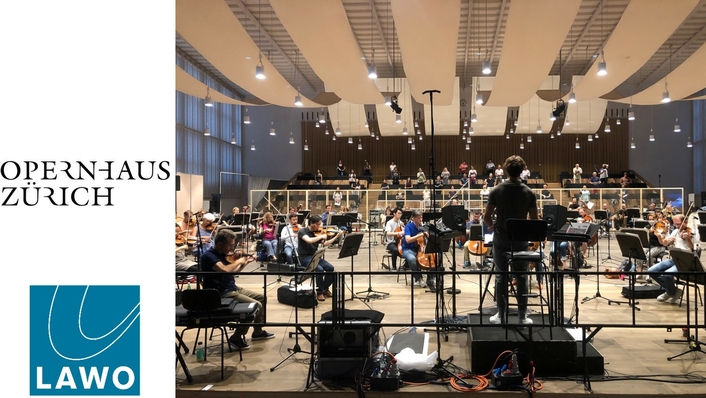 In the age of social distancing, how can an orchestra and choir create a great musical performance when they cannot be in close proximity to each other? During the coming season, Switzerland’s renowned Zurich Opera House will rely on Lawo IP technology to solve exactly this problem. The need to find a solution for future performances became clear in early 2020, after Switzerland’s lockdown went into effect on 15 March. That solution came in the form of an IP-based Remote Production installation from Lawo, designed specially for WAN-based remote productions. Equipment includes a Lawo mc²36 console, Compact I/O stagebox units, and V__remote4 devices to transport and process video and audio signals, plus an upgrade of the Lawo Nova73 HD Core already installed at the Opera House which adds RAVENNA networking and additional SFP Ethernet ports.

“At first we sat at home, puzzled and surprised, but pretty quickly we were thinking about how to move forward,” says Oleg Surgutschow, head of the Opera House’s Sound Department. “While some departments, like the workshops and costume departments, were able to continue working under the prescribed anti-Corona measures, the sound department’s activities were pretty limited. So we had to quickly find a way to cope to ensure effective rehearsal operations and, later on, and deliver opera, operetta and ballet performances of the usual high level for the 2020-2021 season.” 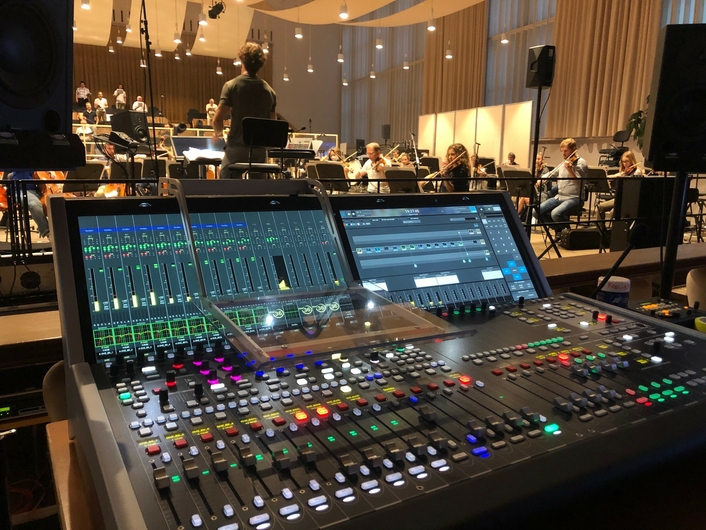 Since the orchestra pit proved to be too small for the required minimum distances between the musicians and choir members would likewise have been performing too close together, the management of the Opera House decided the only option was for both to use separate facilities, and the idea was born to transfer the Bregenz Floating Stage Principle to the opera house.

After agreement was reached, Surgutschow and Fabio Luisi, General Music Director of the opera house, and Michael Utz, deputy head of the sound department, sat down with the other trades to sound out the implementation. Fabio Luisi was already a conductor at the Bregenz Festival, where for years audio and video signals as well as intercom have been transmitted via long-distance connections between the stage, orchestra and audience, so the concept was a familiar one.

“However,” says Utz, “we had to adapt the Bregenz model to the needs of our house. The Bregenz Festival is a long run of performances, while the Zurich Opera House has a changing program with changing musicians and ensembles. The equipment has to be mobile, and we have to be able to adjust settings quickly and safely.” It was quickly decided that the orchestra rehearsal room on Kreuzplatz in Zurich, about 1 km from the Opera House, would have sufficient space for orchestra and choir.

Corona restrictions meant that delivery times for the chosen technology would be lengthier than usual, so time was of the essence in deciding on the solution and procuring the needed materiels: infrastructure for the audio and video signals and their transmission, as well as peripherals — for example, 60 microphones for the musicians, each of which now occupy a single desk due to distance rules, and not the double desk two performers would normally share.

“Of course transmission demands were high,” confirms Surgutschow. ‘The orchestra’s sound had to be reproduced in the main hall, video of the conductor's movements had to be transmitted to the musicians, and communication between the stage, orchestra rehearsal room, and other technically relevant positions had to be ensured. This required a secure connection that could transmit audio and video signals without latency, and we decided to use two RAVENNA streams, giving 128 channels in both directions. For the transmission itself we rented a direct, redundant fiber optic connection from the city of Zurich, so that a back-up line is always available.”

The Zurich Opera House is a long-standing and satisfied Lawo customer, so naturally a solution from Lawo was first on the table. Tingo GmbH / AV-Architekten from Muri AG, who were involved in the planning and system integration of the Opera House’s new building in 2014, were called upon again to help with planning and evaluation. 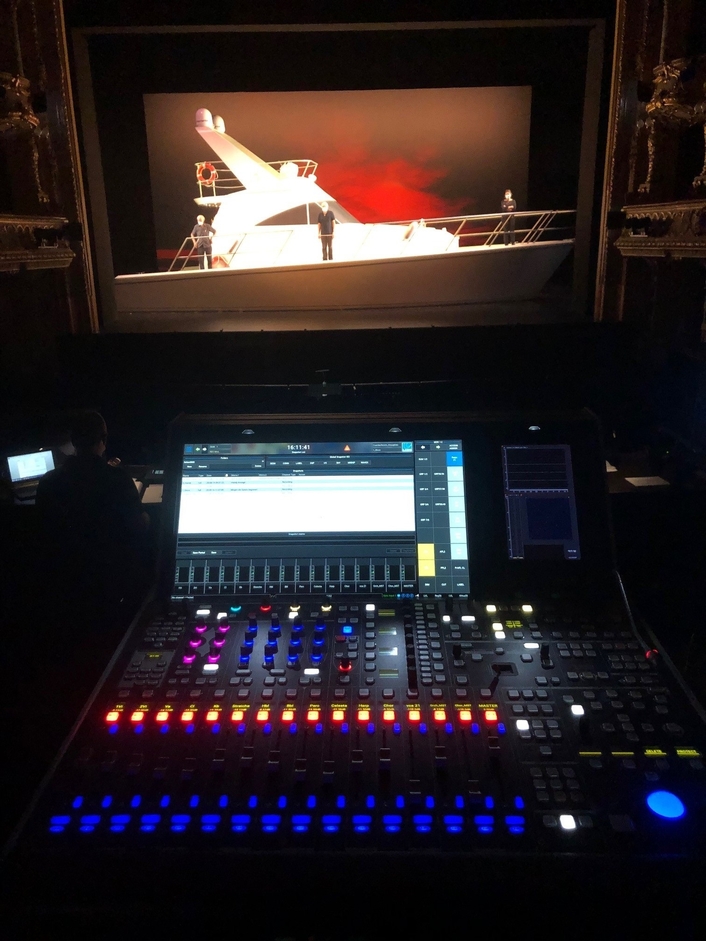 Lawo presented a concept based on experience gained from many other remote production projects. And, for the Opera House, it made sense to employ new Lawo technology that would easily integrate with their previously installed equipment.

The Lawo setup includes a Compact I/O stagebox, a 24-fader mc²36 "all-in-one" mixing console and, with the V__remote4 for converting and transmitting the AV signals, a bidirectional, four-channel Video-over-IP interface with four local SDI inputs and outputs, as well as other tools required for production over WAN. An additional V__remote4 unit is located in the opera house, where a Lawo mc²56 mixing console, installed in 2018, was upgraded with a RAVENNA interface and SFPs in its Nova73HD core.

“The V__remote4 solution covers all our needs - a very powerful system in a slim design,” notes Surgutschow.

From Kreuzplatz, the audio signals are transmitted via the compact I/O, the mc²36 console and V_remote4 to the Opera House, where another V__remote4 receives the signals. There, the mc²56 console mixes the sound and passes it on to the sound reinforcement system. The conductors use cameras to guide the orchestra and choir, who are playing music on Kreuzstrasse. The infrastructure makes great use of the multi-viewer option of the V_remote4, which allows the stage to be transmitted with conductors in a wide shot, with communication via a previously installed Riedel Artist system. The main task of the mc²36 console is to provide a monitor mix for the conductor, but it is also used for parallel rehearsals, individual sound checks, and occasional sound recordings.

IDMT's Spatial Sound Wave technology enables object-based audio reproduction and, compared to conventional reproduction systems, offers for example an extended “sweet spot” plus the ability to create an audio production compatible with virtually any speaker setup (currently, the Opera House employs 80 speakers). Ten loudspeakers in the orchestra pit form the first wave front, so that the orchestra sound is emulated there. 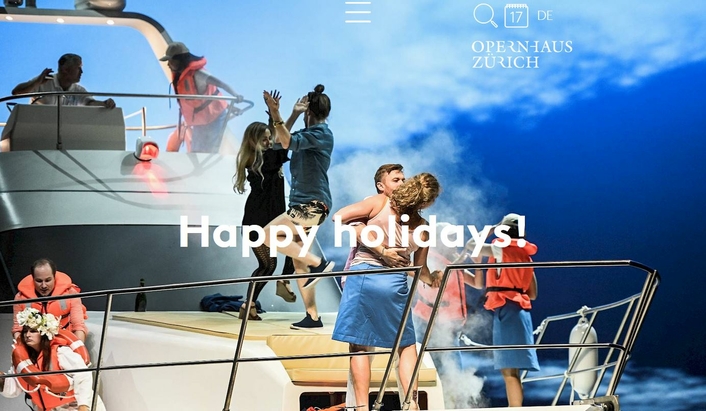 The total latency of 10ms (video) and 5ms (audio including emulation, requires hardly any readjustment for synchronicity. Since the ensembles are used to working with the existing camera system, this change does not pose a problem and, in fact, the technology actually performs much better than it did before.

Opera House rehearsals, some of which have already been implemented as a performance inluding recording, transmission, stage presence and sound reinforcement, have been very successful and promise an interesting, artistically valuable and high-quality 2020-2021 season. The season premiere will take place on September 20, 2020 with the opera "Boris Godunov" by Modest Mussorgski, followed by "The Czárdás Princess", an operetta by Emmerich Kálmán.

For the Zurich Opera House, Lawo remote production technology not only helped overcome the distances necessitated by COVID-19, but using the workflows now possible with Lawo equipment, ensures that those distances disappear from the perceptions of both the Opera House’s performers and audience.