One of the co-founders of video design group Mesmer, Ian William Galloway presented original, cutting-edge and highly atmospheric visuals for the show, which is set inside an asylum.

“The production called for three remote controllable CCTV cameras to follow the action on stage,” explains Salvador Bettencourt Ávila. “One of our biggest technical challenges was reducing the latency to an acceptable level whilst still having the flexibility to manipulate and control the image as needed.”

“XL Video's new Catalyst media servers were used at the heart of the system. Chosen mainly for their flexibility, they allowed us to control the cameras reliably, capture the live video feeds, manipulate them and play back content onto three 65" plasma screens rigged above the set.”

To counteract the latency issue, numerous tests involving XL Video and National Theatre of Scotland-owned equipment was carried out both prior to production and again during the lengthy four week rehearsal process. 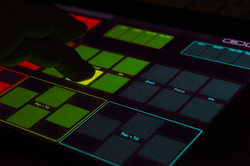 Says XL Video Project Manager Ed Cooper: “It was a pleasure working with Ian and Salvador who brought a very original approach to the video that challenged people’s perceptions visually and kept the integrity of current day video technology”. Both elements embody the ethos of the National Theatre of Scotland.

Transferring to Broadway only three days after the UK Production ends, it was also essential to bring XL Video US on-board to build a replica system in the US ready for a quick installation in New York.

Working with David’s Vega and Hyslop from XL Video in Los Angeles, this demonstrates how XL Video’s global organisation can help the production achieve the same dynamic in the US as in the UK.

Ávila comments, “XL Video's international reach was crucial to the show with the exceptionally tight schedule between the production coming down in Glasgow and opening in New York.”

Macbeth is another huge success for the National Theatre of Scotland. All involved in the production have received numerous standing ovations and much critical acclaim.

XL Video
XL Video Steps Up To Stadiums with Coldplay