XL Gets Arty at the Guggenheim 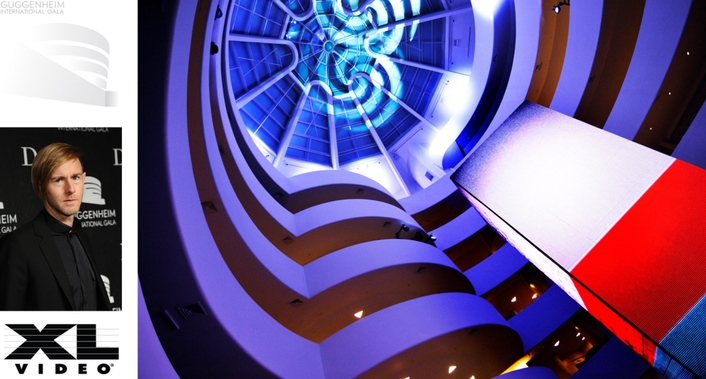 .
Cool music and modern art combined at New York’s iconic Guggenheim Museum for a special set by electronic music pioneer Richie Hawtin, who swapped his more usual club backdrop to play as Plastikman alongside his brother Matthew, as part of a high profile fundraiser hosted by the Guggenheim’s Young Collectors Council.

XL Video was asked to build a striking LED monolith on the ground floor of the Guggenheim Museum’s impressive atrium to provide a kinetic sculpture and visual centerpiece for the event which was sponsored by Dior.

The gig was Project Managed for XL Video by Paul “Macca” McCauley from the UK office who was asked to produce a video solution for the visual concept created by Ali Demirel & Hawtin. Mark Ward from London-based Proper Productions oversaw the technical design and production for Hawtin’s set. XL and Ward have a relationship stretching back many years. 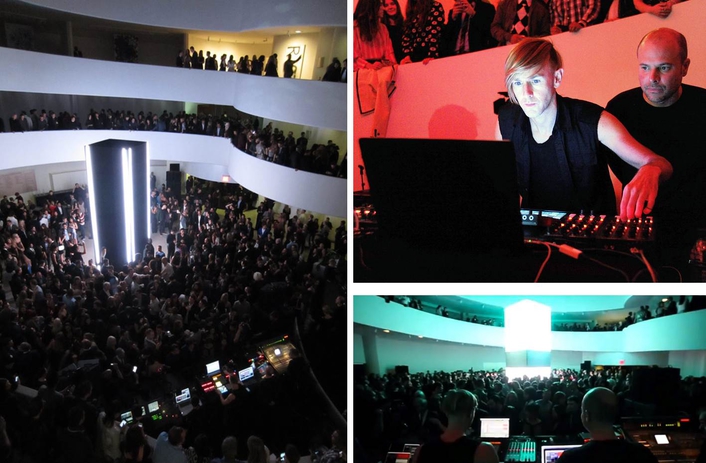 Hawtin already knew that he wanted an LED tower, and the requirement was that this had no visible supporting structure and appeared - as if by magic - right in the centre of the main performance area – like a mysterious living, breathing beacon of artwork - running content linked to the soundscape that Hawtin was creating.

The tower superstructure was constructed first, then clad with XL’s Pixled F-11 LED product – 12 tiles high and 4 wide on each face. The tiles had to be modified so they would attach to the structure leaving a minimum of 20mm gaps around all edges of each tile.

To ensure that everything went swiftly and smoothly on site, a pre-build was completed at XL’s Atlanta facility by Macca and LED Tech Pieter Laleman.

All the show video content was generated in real-time by Hawtin's and his visual team's laptops running state of the art TouchDesigner software from Derivative Inc. The feeds were fed in through XL's Barco ImagePRO-II which enabled switching (if needed) between their main machine going in on DVI and their backup utilizing the HDMI input. 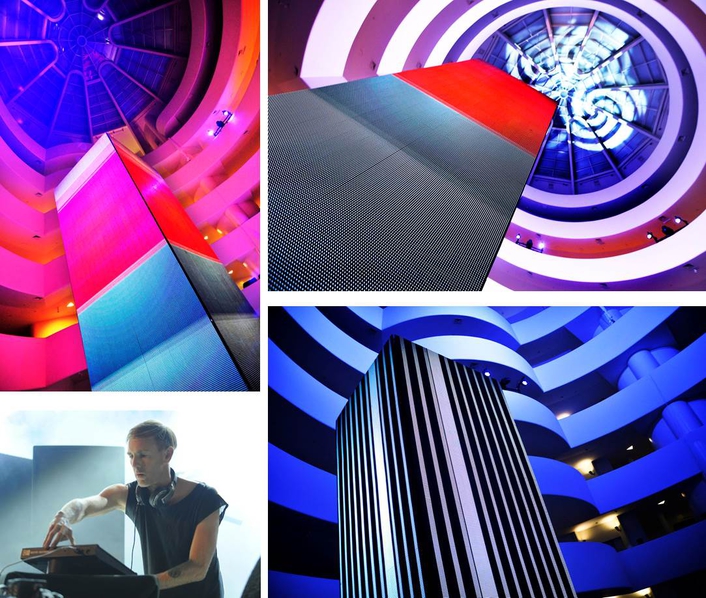 The control position was set up about 6 metres back from the LED tower facing onto one of its corners and up there with Hawtin were his visual technicians, Jarrett Smith and Itaru Yasuda, his Lighting Designer Matthias Vollrath and Sound Engineer Johannes Kraemer.

The LED tower looked super cool when in action reflecting and bouncing colour and texturing all around the vast atrium which is a stylish, completely white wide open space with overlooking balconies and a glass ceiling.

Some additional lighting fixtures were installed to augment the picture, but the mega-bright LED tower was the main lightsource – pulsing and flowing with the rhythm of the music … and looking highly appropriate in the setting.

Macca comments, “It was an exciting, ambitious and totally different project due to the innovative music and the unorthodox environment for this type of performance … which produced amazing results and great vibes.”