The Whisper of the Stars in Siberia 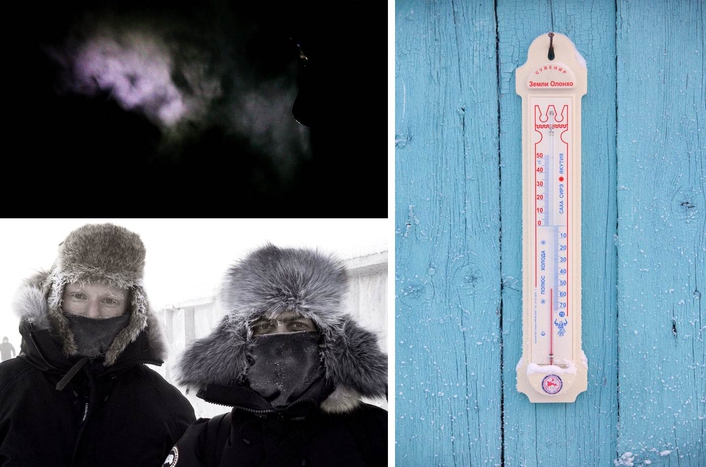 Artist Juergen Staack makes recordings at the coldest inhabited place on earth
It all began with a documentary on the TV arts channel “arte” about the world’s coldest inhabited place, Oymyakon in the far east of Russia. The programme also mentioned “ice whispering”, a phenomenon that occurs when people breathe and speak in extremely low temperatures. The breath immediately freezes, generating a crackling noise that follows the speaker like a shadow.

Fascinated by the idea that words turn into crystals with a sound of their own, the artist Juergen Staack travelled to Yakutia in 2012, accompanied by his artist colleague Thomas Neumann. The sound recordings that Staack brought back with him will be on display until 1 March in the exhibition entitled SAKHA at the Konrad Fischer Galerie in Berlin. On his acoustic hunt to record the rare phenomenon of ice whispering – which the natives call “the whisper of the stars” – Juergen Staack took along an MKH 8060 RF condenser microphone from Sennheiser as part of his equipment.

The journey to the Pole of Cold
With financial support from the Arts Foundation of North Rhine-Westphalia, Staack and Neumann set off for Yakutsk, the capital city of the Sakha Republic (Yakutia), in January 2012. The minus 35°C that confronted them at the airport was just a foretaste of the temperatures awaiting them at their actual destination, Oymyakon. In 1926, a temperature of minus 71.2°C is said to have been measured there, qualifying the village for the title of “Pole of Cold”. The first week was taken up with planning the onward journey. “We had to wait until there were enough passengers to fill a minibus to Oymyakon,” Juergen Staack recalls. “When the driver had finally got enough passengers together so that we could set off on the 24-hour trip, I must admit that we felt a bit queasy. What if the bus broke down in these temperatures…?”

The Kolyma Highway, the “Road of Bones”, took them around 700 kilometres in a north-easterly direction. The village of Oymyakon lies in a wind-protected valley that prevents the cold air from escaping, thus causing extremely low temperatures in winter. “During our first days there it was minus 48°C, which was – don’t laugh – apparently too warm for ice whispering. It meant that we had to correct the temperature that had previously been considered necessary for ice whispering, 45°C, downwards. As we couldn’t hear any noise, we started to get a bit nervous. Although there had been reports of ice whispering, no recordings actually existed. Was the whole thing perhaps just a myth?”

Staack filled the time waiting for colder weather, and therefore the opportunity to record the ‘whisper of the stars’, with other audio and video recordings for SAKHA, including conversations with a local meteorologist and inhabitants who talked about their experience of ice whispering. “Some of them were not even aware of the phenomenon, while others reported on how they had experienced it when they were young,” Staack recalls. “The sound seems to have become increasingly seldom. For me, this example makes global warming tangible. A nearby coal-fired power station might also play a part in preventing the temperatures in Oymyakon from falling quite as low as they did some years ago.” 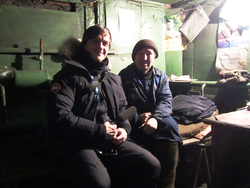 At their destination
But Staack and Neumann persevered and had their equipment ready night after night. And their patience was finally rewarded. Juergen Staack: “We went out every night to make recordings, but on this particular night the temperatures had dropped even further, to minus 57°C. And suddenly: there it was! Our breath and speech produced a noise, a jangling sound, a kind of rustling crackle that reverberated after each word and each breath and followed it like a shadow. Against the light, we could see our breath billowing and vortexing.” The next night, the magical spectacle was already over – against all expectations, it had got warmer.

After spending around three weeks in Siberia, the two returned to Germany, where Juergen Staack set to work preparing the material and designing the SAKHA exhibition over the course of the year.

The installation in Berlin
Visitors to SAKHA at the Konrad Fischer Galerie in Berlin first enter a white room. Visually, a peaceful, observational video sets the mood for the tranquillity of the landscape and life in Oymyakon. On the floor, there are four dark-grey loudspeakers made of concrete and arranged in a square, which reproduce a walk in the snow. “I had noticed that snow in Oymyakon sounds different at each temperature. For the installation, I walked around a square shape and recorded the crunching of my steps in the snow. When visitors stand in the square, they can hear a person walking around them through the deep snow.”

Information on the MKH 8060
The MKH 8060 is a short gun RF condenser microphone that is ideally suited for high-quality sound recordings in climatically difficult environments. “Juergen Staack’s journey to the world’s coldest inhabited place also sets a new low-temperature record for the MKH 8060,” explains Sennheiser Product Manager Kai Lange. “Thankfully, due to their RF condenser principle, MKH microphones are already equipped with two advantages for use in inclement weather: a high RF voltage at the capsule and very low capsule impedance.” 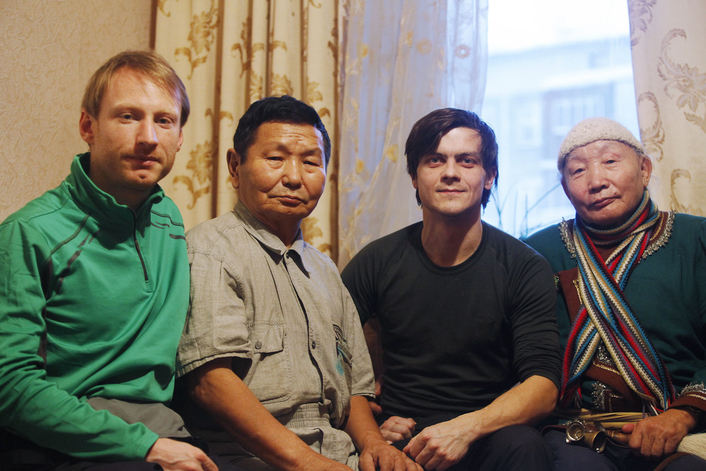 “The high RF voltage at the capsule has the effect of ‘pressing’ the humidity out of the microphone in critical situations, for example when making outdoor recordings in mist and fog,” Lange continues. “We could say that the capsule ‘notices’ the high humidity in the air and dries itself.”

“The second advantage is the low internal capsule impedance, which is less than 1 kohm, while conventional capsules have a much higher impedance of between 200 kohms and 200 megaohms, depending on the frequency. At these high levels of impedance, the slightest fault in the insulation results directly in the failure of the capsule, whereas RF condenser microphones are absolutely robust.”