W-DMX™ Saves Season of Light over 4000 Meters of Cable 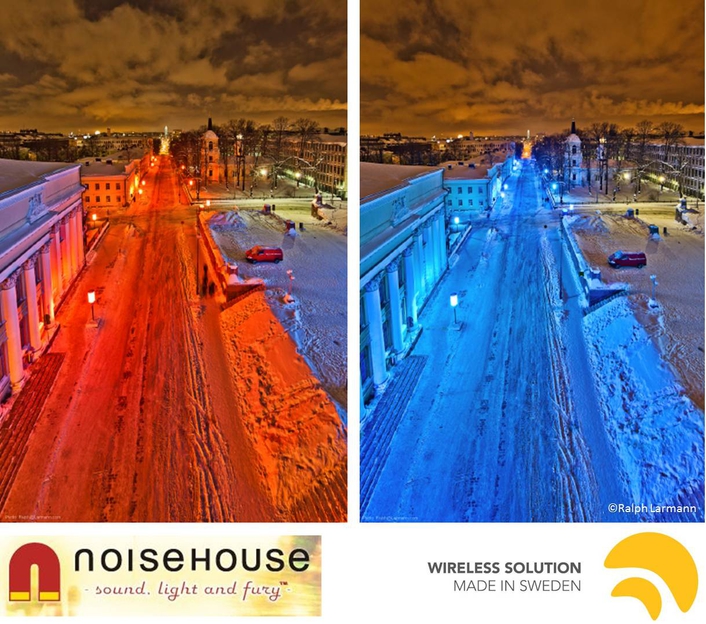 W-DMX was used for Martin Kuhn’s design on Unioninkatu (Union Street) entitled “100 Years”
The 3rd Season Of Light event in Helsinki recently wrapped up to huge critical acclaim, with W-DMX playing an integral part of one of the major installations. The event, organized by the City of Helsinki, was held from December 31 to January 9 and showcased lighting designers Martin Kuhn of Germany, Per Sundin of Sweden, and Tulay Schakir and Mikki Kunttu of Finland, who each created lighting installations for some of the main buildings around the city, which included the Esplandi Park Senate Square, Union Street, Kaisaniemi Park, Sanoma House, and Parliament House.

The City Of Helsinki considers Season Of Light to be one of their major annual events with this year seeing over 50.000 spectators walk along the light path from the Senate Square to the Parliament House during its 10 day showcase. The project was covered by CNN International news as well as every major TV channel and newspaper.

W-DMX was used for Martin Kuhn’s design on Unioninkatu (Union Street) entitled “100 Years”. The installation used 126 pieces of Laser Imagineering Sunbeam 100cm Full Color LED fixtures. Each piece used 60 parameters for a total of 7560 parameters. The W-DMX system handled a total of 18 Universes at distances up to 450 meters (1475 feet).

Site Technical Manager Eero Helle of Noise House Oy Finland said of W-DMX, “The whole system was up and running from the evening of December 29. It performed under very harsh weather conditions with snow and temperatures down to -25°C (-13°F). In the same room where we housed the transmitters, Finnish Broadcast Company, YLE, put their Digital Link to broadcast the live show from Senate Square on New Years Eve and there were no interference problems whatsoever. YLE also used 2 wireless cameras on that show approximately 200 meters away from our transmitters, and there were no interference problems with those either.”

Technical Production Manager Jussi Kallioinen remarked, “Had we used actual DMX cable, the installation would have required somewhere around 4.5 kilometers plus splitters, repeaters, etc. By using W-DMX we only used 250 meters of cable and that was only to find a better place for the receivers. It saved us not only loads of cable but loads of time and energy.”

Lighting Designer Martin Kuhn added, “The W-DMX was reliable, that’s true. This was not your ordinary venue either but I have used it before and it was always rock solid, so I had no worries. I was concerned beforehand about the heavy traffic on 18 lines of 480 channels of DMX controlling LED and potential lag time, but that was totally fine. It was all good.”

Lighting Designer Mikki Kunttu, one of the chief organizers of the event explained, “With all the technical challenges involved with the harsh weather conditions, our technical production was able to overcome every obstacle and literally no major problems occurred. The most important factor in these conditions is the choice of equipment that goes hand in hand with the maintenance and service work required to get the production up and to keep it running. W-DMX was one of these products that stood up to the test and helped make the project a success.”

Wireless Solution Sweden is a world leading manufacturer of Wireless lighting control equipment, with over 55,000 units sold worldwide and over 35 OEM partners. Hailed for its reliability and ease of use, Wireless Solution’s W-DMX range of products is the consistent choice for top professionals in the lighting industry and specified with perfect results in high-profile events and installations around the world. W-DMX has been used for lighting major events including the 2010 Olympics in Vancouver; the Olympic Council of Asia (OCA) Headquarters in Kuwait; Andrea Bocelli live at the Colosseum; Times Square in New York City; the Nobel Prize Banquet; the Berlin Wall 20-year Anniversary; Eurovision Song Contest 2010; and many more.