Recording control room of Vienna Opera equipped with Lawo system
The „Vienna Volksoper“ (“Volksoper Wien”) is Vienna’s grand house for operetta, opera, musical and ballet, providing superior musical entertainment. Colourful, multifaceted and joyful, the Volksoper is the only concert house in Vienna attending to the genre “operetta”. The building from 1898 was up for the improvement of fire precautions also in those rooms accommodating the audio technology. This offered the opportunity to renovate and modernise the digitally equipped control rooms and re-fit them completely with new interior and state-of-of-the-art technology. For the recording control suite the Vienna Volksoper decided for a mc²56 mixing console from Lawo.

In the opera season between September and June, around 300 performances of about 35 different productions stand on the playing schedule of this repertoire theatre, furnished for seating 1,337 spectators. The repertoire of the Volksoper reaches from “Die Zauberflöte” (“The Magic Flute”) to “Tosca”, from the musical “My Fair Lady” to the ballet performance of “Max und Moritz”. Not to forget all the operetta classics like “Die Fledermaus” (“The Bat”), “Die lustige Witwe” (“The Merry Widow”), or “Wiener Blut” (“Viennese Spirit”). More than 150 singers, 95 orchestra musicians and 100 dancers are part of the ensemble. This means high demands on the audio technology with regard to size, flexibility and quality, which places the same high demands on the recording control room, the more so as the Volksoper is the only multi-utility house in Vienna that includes opera, operetta, musical and ballet in their schedule. 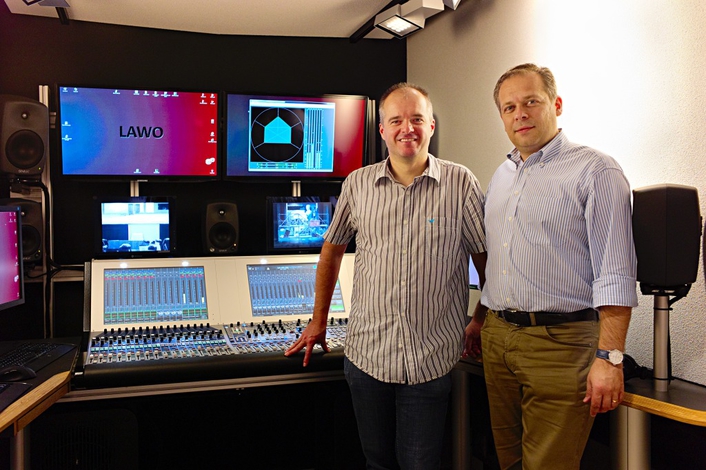 The Lawo mc²56 with HD core and one DALLIS frame for the recording control suite offers 32 faders (16-16C) and 96 DSP channels. The router offers a capacity of 8,000 x 8,000 crosspoints, the power supply units (PSU) are redundantly designed. The mc²56 replaces a digital mixing console in the control room and has to communicate perfectly with an already installed digital console for PA purposes. Despite different manufacturers, it is possible that one control room can share audio signals with the other control room (CR). “Between PA control room and recording control room there is a connection – mainly via MADI – as fallback exist analogue lines. Also OB vans can be supplied via MADI and via analogue connections”, explains Martin Lukesch, Head of Audio- and Media Technology at the Volksoper Wien.

The technical department of the Volksoper was engaged for one and a half year with the research for the right equipment. The team went to trade shows, gathering information from many manufacturers of mixing consoles. All manufacturers on the shortlist agreed to supply their mixing consoles for testing. After a trial run under real conditions and after examining the quotes, the solution with the mc²56 from Lawo proved as the most sensible. Lawo came closest to the ideal concepts of the Volksoper Wien and proved also in their cooperation by prompt reaction times and smooth handling as a reliable and professional partner. “The system’s flexibility with regard to mechanical built and the free configurability played a decisive role, just like the clear design and intuitive operation of the mixing console as well as the excellent sound”, continues Lukesch. For example, the size of the metering displays and the number of summing displays can be freely selected. “And, last but not least, because of the sophisticated surround mixing options including upmix did we decide for the Lawo mixing console”, closes Lukesch.

The mc²56 has been deployed in the Vienna Volksoper since September 1, 2012, with recordings carried out on it: “Ein Walzertraum” (“A Waltz Dream”), “Salome”, “Die Entführung aus dem Serail” (“The Abduction from the Seraglio”), “La Traviata” and “Tosca”.