TV Skyline in Verona for “Carmen” 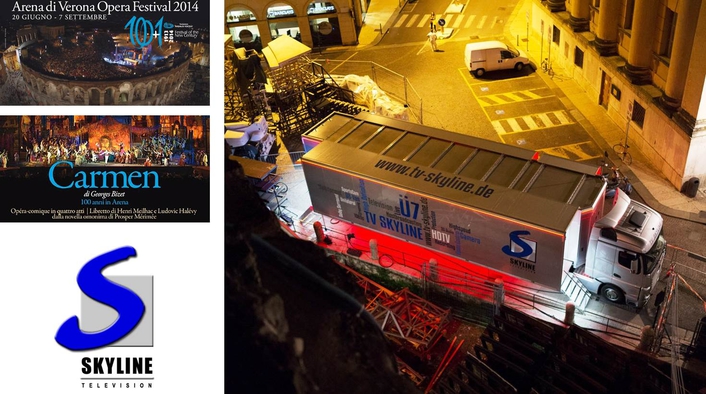 .
At the Verona amphitheater the most popular opera "Carmen" by Georges Bizet was staged  this summer. Some of the smash hits of the classical music genre come from "Carmen", while the Arena di Verona is a very nice and attractive venue. TV Skyline with its Ü7 was on hand to realize the TV coverage of this elaborated opera production. NHK and Arte showed the opera in full length, while ZDF was broadcasting highlights of the performance.

"Carmen" by Georges Bizet is one of the most popular operas in the world. It contains some of the most famous classical melodies. The prelude and the famous arias of "Carmen" are world famous; a lot of people can hum along the Torero song of the opera: "En La Lucha".

Director Franco Zeffirelli staged “Carmen” as a mass spectacle on the huge stage with a focus on even the smallest details. His powerful and authentic images took the audience on a journey back to the 19th century. 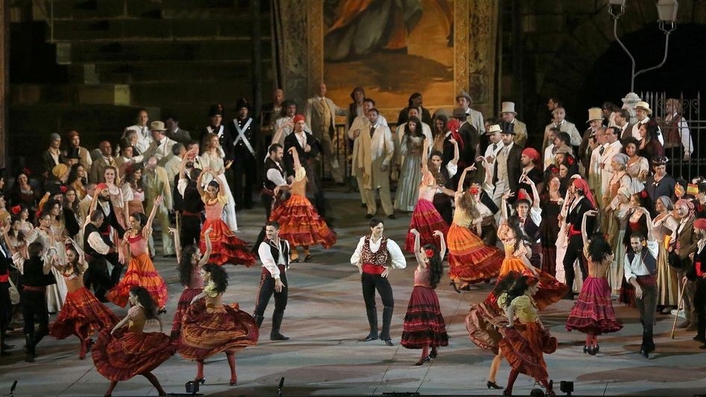 Henrik Nánási, music director of the Komische Oper Berlin, conducted the ensemble of singers with Ekaterina Semenchuck as Carmen, Don Carlo Ventre as Jose and Carlos Alvarez as Escamillo. TV Skyline was in on site with its new OBVan Ü7 and realized the technical implementation of the spectacle for TV.

Performances in an arena like in Verona of course are a very impressive experience for the spectators: an open-air performance in front of a historical backdrop, of course, has its own special appeal and charm.

However for TV service providers such venues often involve additional challenges on a large scale. It starts with the fact that the structural substance is very sensitive and obviously not designed for heavy loads. "You have to work towards every camera position completely from point zero, the cable running paths are usually very long and of course there are no fixed locations for OB trucks and the equipment. Usually only very limited space is available and in addition you have to share it with other technical trades, "reports TV Skyline CEO Robert Kis, who oversaw the Verona operation of experienced classical producer TV Skyline from Mainz. 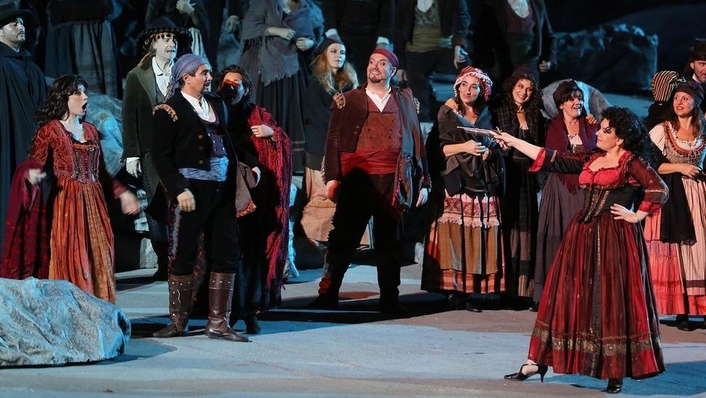 Construction, Logistics
Due to other events taking place in the arena was very little time for the production and the assembly/disassembly in Verona. It was a challenge for TV Skyline to generate a precise time schedule for the production days: Already on the set-up day was used spontaneously for the recording of the first rehearsal. However TV Skyline learned this only on arrival, "but thanks to a highly motivated and experienced team finally it all worked out perfectly," Robert Kis look back. 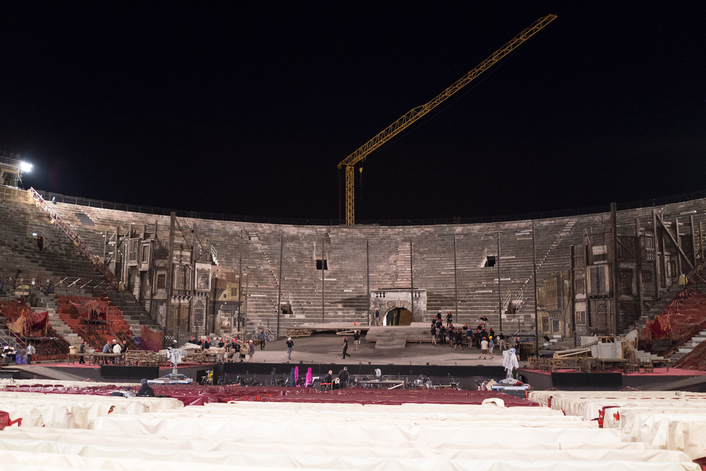 Camera Setup
The production was realized with a total of 16 cameras. Six of them were equipped with 99fach zoom lenses, so were very close even from great distances and were able to deliver intimate settings. In addition to Ikegami cameras also numerous specialty cameras (developed by TV Skyline) were in use. 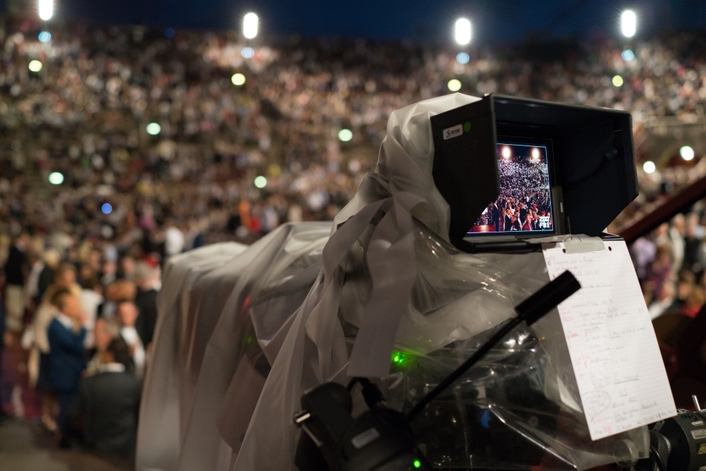 For example, two of the compact QubeCams were mounted at the stage edge and  a Sportscam 5 delivered the beauty shot. Three Ikegami cameras were mounted on Gentle:Mote remote controlled pan / tilt heads: One served as the conductor camera, the second was installed on the stage, and the third yielded images from a unique perspective, by passing through from the catacombs of the arena and looking across the stage into the auditorium. A crane camera delivered city views and wide shots of the arena. 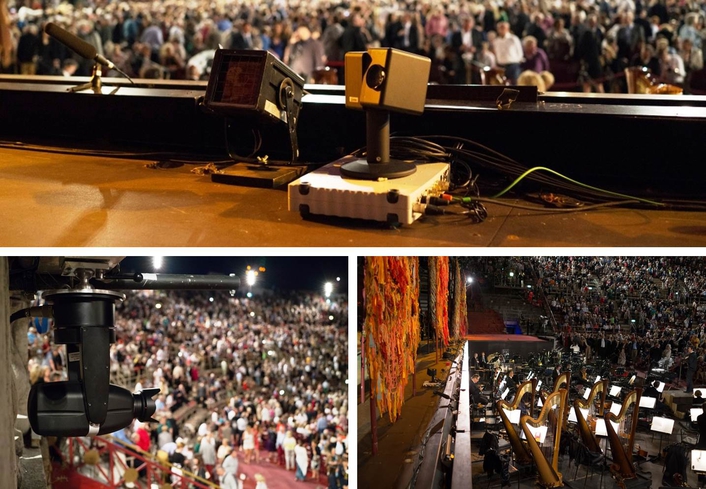 Sound Equipment on Stage
The production of Franco Zeffirelli left very little room on the stage for the very high demands on live sound. Here it was necessary to find creative and viable solutions for this challenge: the choir could only be covered with microphones on tripods, because there was no way to hang microphones from above. This was a challenge in situations where the smugglers were pushing their carts across the stage or horses were moving across the stage.

The microphones on stage and within the orchestra also needed a very effective wind protection: Finally, the Arena of Verona is a large, open, ancient amphitheater. However also for open air productions you have to ensure that the sound is covered properly even in adverse conditions. But despite all the preparations you have to carry out, ultimately you always need a bit of luck: For example, the wind during the first rehearsal  was so strong that you could clearly hear wind noise despite intensive wind protection - but in time for the show the weather calmed down. 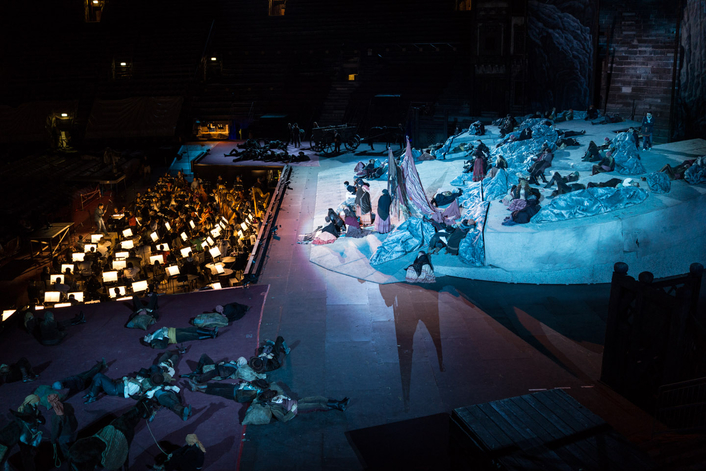 16 wireless micro ports were in use for the protagonists of the opera, the four singers were wired twice for safety reasons - of course invisible to the audience. On stage six Neumann microphones type KM 140 were placed together with an additional MS-couple. Overall, more than 64 microphones were in use.

Multi-track recording
In Verona TV Skyline recorded the sound redundant on 64 tracks. During the production there was hustle and bustle in the sound control room: In addition to a French sound director, who acted as supervisor, there was another sound director responsible for the mixing of the Opera and a sound engineer was there for desk support and command coordination. 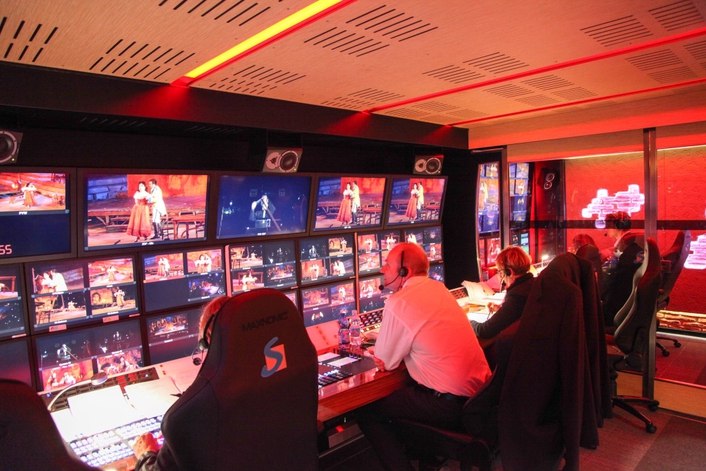 For the sound area of the Ü7 TV Skyline has chosen a large Lawo mc²66 console and a matching router. The Lawo console can be virtually split and allows realizing different mixes in parallel. In addition, the console also provides very powerful automation capabilities. For live productions these functionalities are rarely used, however in Verona it was of great benefit, as it was necessary to perform quickly  automated audio corrections in some parts of the recording.

Multiple Evaluation
Because in addition to Arte and ZDF, also Classica Italia and NHK took the signals from TV Skyline as well as the recording for a future DVD release was carried out, the resources of the Ü7 were used intensively. 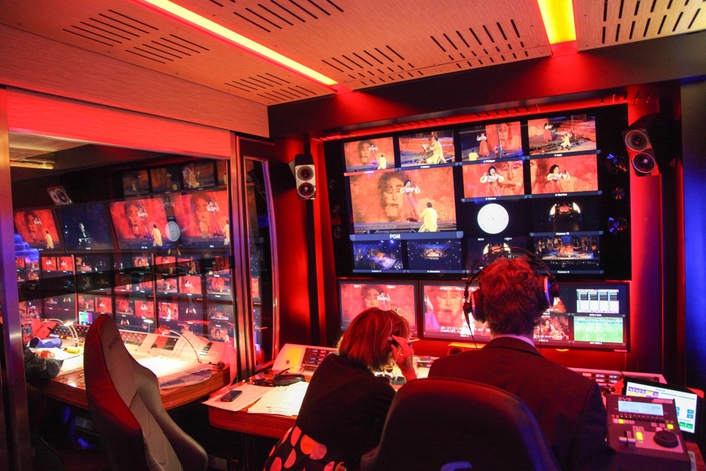 Arte showed the opera in full length, ZDF focused on the highlights of the opera, but both stations had booked presentation positions in the arena. The preliminary program with presenters, break programs, interviews and different play back materials for Arte and ZDF was realized in the main control room of the Ü7. In parallel, the respective transmission programs for Arte and ZDF were assembled on EVS servers including minor image and sound repairs of the live feeds.

In the sub-production of Ü7 another team realized the live production for Classica Italia.

The Japanese public broadcaster NHK had ordered a live recording and for the planned DVD release another recording had to be realized. For this purpose TV Skyline recorded the signals of all 16 cameras onto four EVS server for post-production. By using the EVS editing program IPDirector it then was possible to complete many different versions of the material within a short time. 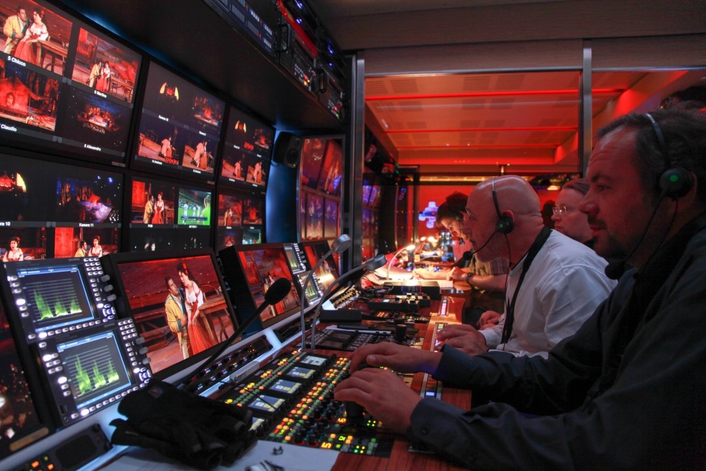 The international production team consisted of about 40 people. Robert Kis explained: "We benefited from the international experience of our employees and their multilingual capabilities."

Space Concept
For classical music productions usually large teams are involved. In addition to the staff for directing, mixing, scripting, supervising and score-reading representatives from Arte and ZDF needed to find work space for the production in Verona. Here the flexible room concept of the Ü7 played a key role: To prevent the individual employees did not disturb each other, the available space within the Ü7 was divided by glass walls into confined and sensitive production areas which allowed the various teams to work in peace. Robert Kis recognized: "It's nice to see that customers are embracing this concept of quite well." 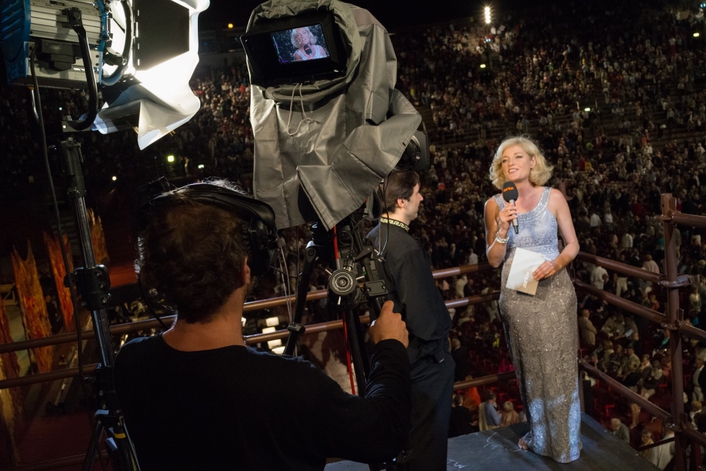 Summary
After the Bayreuth and Salzburg Festival, the Munich State Opera, the Festspielhaus Baden Baden, La Scala and the Deutsche Oper Berlin, Verona was another milestone for TV Skyline on the map of great and famous opera venues explains Robert Kis: "It's something special to work with such a big production with so many trades. The rear half of the arena and the catacombs were filled during the production with singers, artists, animals, makeup artists, musicians and riggers. The operations of all trades had to be carefully coordinated, and had to be fit together perfectly. It is very impressive to see such a complex interplay working, because everybody must cooperate well and react quickly and effectively in an uncomplicated way. "