TNDV unified its 52-foot expanding side Aspiration and the 40-foot Inspiration trucks to create one integrated mobile production infrastructure.  This satisfied the enormous production requirements, which included 23 cameras in multiple configurations, a fully populated video and audio routing architecture, a bank of 26 file-based recorders for web content, and more than 120 intercom ports for venue-wide communications.

The 23-camera operation, one more than this year’s Super Bowl, included seven dollies, six long lenses, three wireless cameras, two SteadiCams, two jibs and a flying wire camera among others.  This helped TNDV capture the staging from all angles and directions, including live bands and musicians, with cameras strategically positioned around the entire venue. 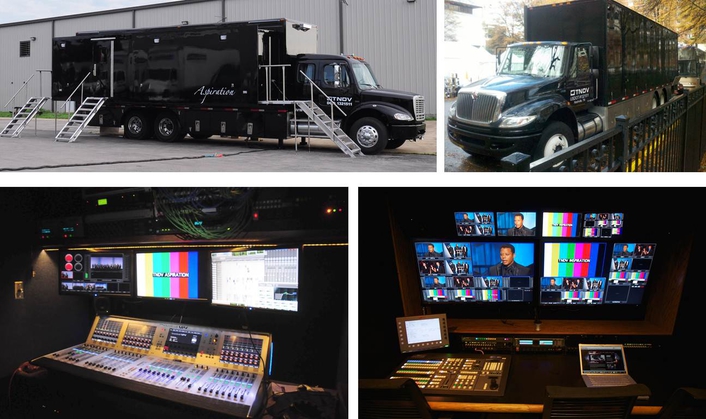 “The entire event was in the round, which meant we had to cover multiple angles simultaneously,” said Nic Dugger, president of TNDV.  “The lighting was of incredible scope, and there were two gigantic LED screens, each 96 feet in length.  The scope of the event itself, and the fact we used 100 percent of the venue, truly drove the production requirements.”

“This year Passion 2013 presented a huge challenge, as it was the largest event we have done along with the least amount of load-in time we ever had,” said Jonathan Sheehan, organizer of the Passion Conferences.  “We needed a fresh approach to create the best ‘Dome-sized’ production, as audio, video, lighting and staging is very different in the round than in an arena or end-configuration stadium setup.  Almost everyone is looking at a screen so video is of utmost importance.  With the compressed load-in time, we knew that TNDV's detailed planning, preparation, and execution was critical to pulling off the experience we were trying to create.”

Dugger assigned web content responsibilities to Inspiration, with Aspiration staff producing in-house LED displays.  Content was delivered in five aspect ratios, including 1080i for the web stream, and custom configurations for three widescreen displays and two ribbon LED displays that circled the venue.  A Harris Broadcast Platinum dual-router configuration delivered signals between trucks and across the venue, including the front of house position and an in-venue graphics station where lower thirds, full-screen graphics and video playback were sourced.  Aja Ki-Pro systems accommodated 30TB of recorded content throughout the event, with 26 recorders attached to 56 RAID-protected storage drives. 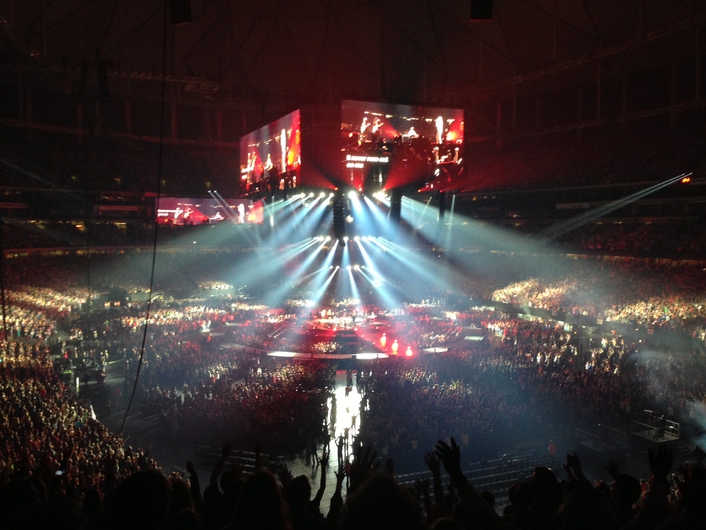 The Platinum router’s integrated Harris Broadcast HView SX Hybrid multiviewers were also well-utilized, with 12 configurations across the two trucks and venue used to monitor all video, audio and data sources for in-house and web signals.

“We really put the multiviewers to use, all the way down to using multiple tally light indicators,” said Dugger.  “In-house feeds got a red tally, web feeds a green tally, and signals sourced for both got a yellow tally.  We built PIPs and established custom quad splits for directors that allowed them to pull up any sources they needed.  We even created an RSS feed on the multiviewers to display tweets about the event.”

Dugger noted that while the event itself was massive, the main challenges came on the front-end of the show – namely, a very tight load-in schedule.

“We had less than 16 hours to load in the infrastructure for two trucks, run tests and make our connections,” said Dugger.  “Standing in the Dome on night one, looking at four massive LED screens and feeling the energy of 60,000 college students and young adults was very rewarding — all while watching the tally lights flashing, playback systems working and sources keyed correctly.  It proves that live productions of any size and scale are possible with the right team.”

ABOUT TNDV: Television
Formed in 2004, TNDV: Television represents the culmination of many years of broadcast and live production for Nic Dugger, owner and president; and his staff of full time engineers. TNDV produces events from small single-camera productions all the way up to multi-million dollar international TV events, and takes pride in building custom solutions for challenging productions of any size, in any situation.  TNDV specializes in creating productions that are of the highest quality while being ultra-mobile and always professional.  Recent productions include the Emmy Award winning Bluegrass Underground, The Grand Ole Opry Live and the inaugural season of the all-new Hot20 on CMT.