Tales from the Bridge 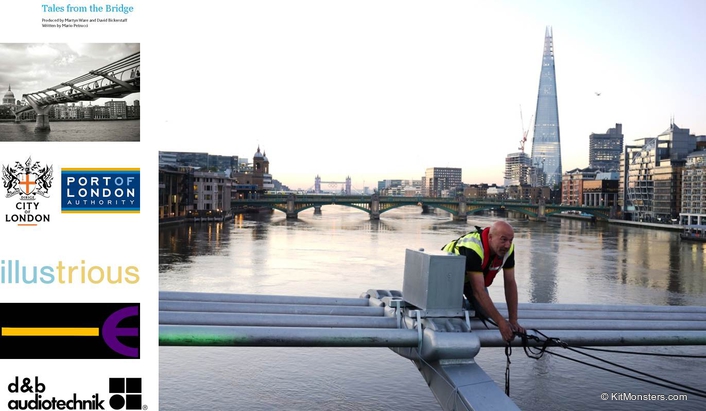 The audio system is based entirely on the d&b audiotechnik little E3 loudspeaker, five pairs of them spread across the full span
"The metaphor is the bridge is alive. It was conceived originally as an interactive soundscape in which the people could play the bridge as an instrument. As the project evolved we changed to the idea of a dream; something contemplative to walk through." Contemporary composer Martyn Ware describing one of the more diverting entertainments commissioned by the Lord Mayor's office to delight visitors to London throughout this Olympian summer. "To give it meaning the music needed some narrative element."

The Millennium Bridge where 'Tales from the Bridge' resides, is already an intriguing pedestrian crossing, a suspension bridge engineered in the horizontal, it swoops gracefully across one of the acoustically quieter stretches of the Thames. "I have collaborated many times with artistic director David Bickerstaff," continued Ware; "Together we have developed methods to impart information in a poetic way. Mario Petrucci provided the site specific narrative, my friend John Tinline at Encore provided the audio expertise and equipment. The onus was to be able to present everything clearly within the 3D soundfield."

The audio system is based entirely on the d&b audiotechnik little E3 loudspeaker, five pairs of them spread across the full span, "They look like little computer speakers sat out on the arms of the bridge," said Tinline. "Yet the clarity is perfect and the lack of harmonic distortion is astonishing," added Ware. In terms of technical partnership Tinline is the oily rag to Ware's musical spanner; rolling up his sleeves manfully for this particular project Tinline encountered some unexpected issues. "The technical set up was a nightmare," he said in his typically blunt fashion. "We have been working over a year on this, with a meeting approximately every two weeks. Trouble is no one has done an audio installation like this before. When the commission first came up nobody was certain who we needed to speak to, the list has proved lengthy. The bridge sits on the north shore in the London borough of Westminster, on the south shore the borough of Southwark; the bridge itself is owned by the City of London and the water below it by the Port of London Authority. These people all needed to consider the application and give their permission. There are also the engineers to think about, and the insurers."

Having successfully navigated officialdom, creating Ware's desired 3D soundfield proved just as contentious. "The positioning was tricky," said Tinline. "Normally with a 3D installation you place the loudspeakers where you want them to create the optimum effect. That luxury isn't available on the bridge, we can only place them on the ends of the arms and the distances between them isn't consistent either; that's a prime factor normally."

He could at least safely house the d&b D6 amplifiers beneath the bridge in a storeroom loaned by The City of London School, but then had to run loudspeaker cables up to four hundred and fifty metres to the most distant pair of E3s. "We could not run 4.0 mm copper loudspeaker cable or heavier because of mechanical limitations on where we were allowed to route cabling. In fact the best we could use is 0.75 mm which goes against everything we've learned on the theoretical side of loudspeaker management. We conducted an experiment in Encore's yard, putting E3s on the end of regular four mm 30 metre runs, and some on 450 metre runs of what is virtually bell wire. Fortunately Martyn's composition is an ambient background for the read poetry; the core audio spectrum is in the central frequencies, there is certainly no low end; as such the difference between the two loudspeakers in the test was tolerable for the purposes of Martyn's intended design. We are also fortunate that the bridge ends are not close to road traffic so the general listening experience on the bridge is relatively quiet." Tinline purpose built wooden boxes to protect the E3s from the elements, "And more aesthetically, to enable us to conceal all the connectors and colour match everything to the bridge structure."

Tested a couple of days before its official inauguration on the 27th July, Ware found himself more than delighted with the realisation of his dreamscape. "There are three different subject areas in the flowing narrative: to the north it is Government in the middle is the commerce of the river; and to the south it's about the influences of art and culture embodied in the South Bank centre.

In other words, a reflection of the three actual environments. The weird thing is you can barely hear the river as you cross, just where the water races past the bridge supports. We measured around 60 dB background level. That does mean we don't have to drive the sound system hard to achieve clarity, the d&b loudspeakers are just fantastic in that respect." Ware's hour long, looping soundfield experience of music and words is punctuated at the beginning with 'Water Night' a special composition written by Eric Whitacre and performed by an invisible three thousand seven hundred and forty six strong choir. "People walking by, especially from the South Bank where you might expect to hear such sounds, were stopping and looking around saying, "Where's that coming from?" Such pause for thought was precisely Ware's intention. For those truly captivated Ware has made the full composition available on line; visit www.illustriouscompany.co.uk

The Beautiful Sound of the Belle Époque
A Rose by any other Name...
Aris Gives Voice to Russia