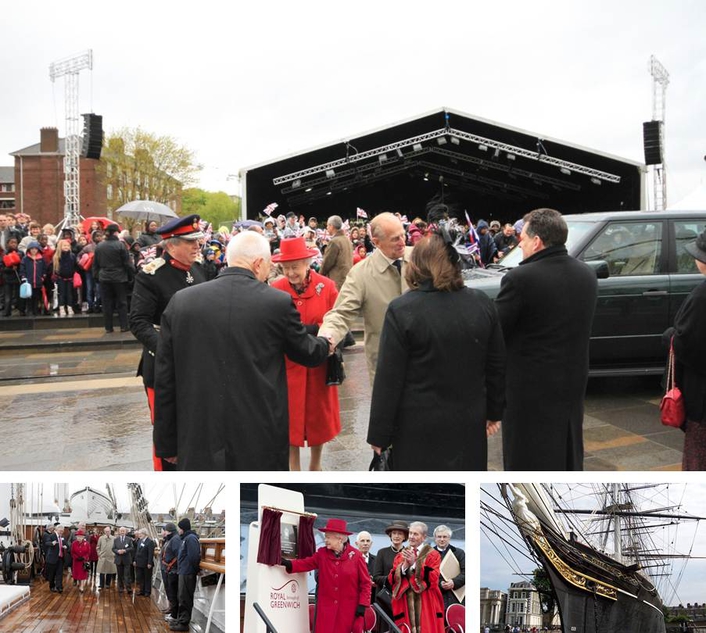 The clipper is now displayed 11 feet above its dry berth on the Thames
Bristol-based event production company SXS was recently commissioned by the Royal Borough of Greenwich to provide sound and full technical production for the royal unveiling of the Cutty Sark in Greenwich. This followed a £50m restoration project as a result of fire damage to the 143-year-old clipper back in 2007.

SXS were tasked with constructing (and dressing) a dais stage, while the PA was provided by the company’s new Martin Audio W8LM line array system supplied by dealers, LMC Audio.

The production company deployed a total of 12 W8LM Mini Line Array enclosures in two hangs, with two W8LMD Downfills at the base of each hang. This was driven by Lab Gruppen FP series amps and controlled using XTA DSPs.

Attended by both the Queen and the Duke of Edinburgh, the launch took place at the Cutty Sark Gardens and the event included a 90-strong symphony orchestra and a 400-strong choir. The Martin Audio system also provided reinforcement for the Queen's speech and took further live feeds from inside the Cutty Sark.

"The Martin Audio W8LM our latest major audio investment and I was delighted to be able to use it for this event,” said Johnny Palmer, Production Manager, SXS Events. “Our sound department has been booming over the last year and we felt it time we invested in a system that allowed for accurate and even coverage. The W8LM is great for shows such as this because of its clarity, simple rigging and aesthetics — and it will be our system of choice when entrusted with highly demanding, high quality production.”

Alex Thompson, Head of Sound at SXS, added his endorsement. “This show was all about clarity, headroom and maximum gain before feedback – all the core principles of our approach to sound. Our new W8LM system was ideal as we had plenty of gain and the accurate response achieved great reinforcement for the performance. Being an orchestral performance the role of the system was to reinforce the sound transparently and ideally not be noticed at all … and that’s precisely what it did.”

The relationship between Martin Audio and SXS (via LMC Audio) began with a visit to the manufacturer’s stand at last year’s PLASA Show, followed by a system demo at Bluewater Shopping Centre, coinciding with the switching on of the Christmas lights. This was arranged by JP Cavaco, Sales Manager at LMC London (with Martin Audio’s Peter Child and Kevin McNally providing technical support).

As for the event in Greenwich, this formed part of a major community engagement programme, and as a result the Cutty Sark now occupies a dramatic new setting.

The clipper is now displayed 11 feet above its dry berth on the Thames and the space under the three-masted vessel is home to an interactive museum where visitors can learn about its history.