Soundcraft Takes To The Woods 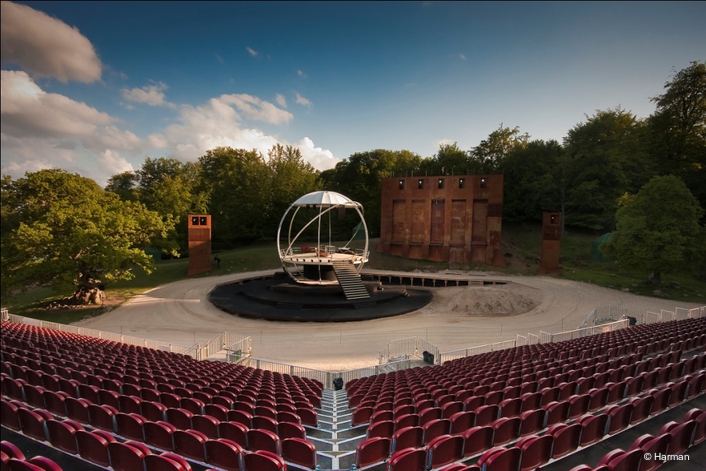 Royal Danish Theatre’s spectacular outdoor production of Dumas’ “The Three Musketeers
Four years after its major success with Thor, The Royal Danish Theatre (Det Kongelige Teater) is presenting its fifth and biggest outdoor production so far, as Alexandre Dumas’ classic The Three Musketeers story is played out by more than 200 participating actors, singers, horses and stuntmen — to loud pyro accompaniment. The event is taking place in Ulvedalene, Dyrehaven, a public deer forest north of Copenhagen, situated next to a famous 1000-year-old oak tree.

The show has been in the planning stage for a number of years by the famous Copenhagen venue, which incorporates The Royal Danish Theater, Royal Danish Opera and Royal Danish Ballet under one roof.

The production has proved a huge challenge for FOH sound engineer, Jonas Vest, who for the past five years has been the resident tonemester. He was fortunate to be able to call on his past experience, having been involved with the programming and sound FX design for Thor.

Talks began in earnest on The Three Musketeers production late last year with the idea of creating a festival-type atmosphere. This time around, the 90-minute adaptation of the Dumas classic (which runs until the first week in July) tasked Vest with balancing the sound between the Lyngby-Taarbæk Concert Band, a huge choir and sound effects in a surround environment. 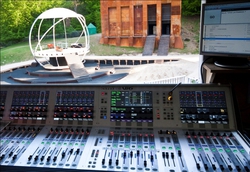 To facilitate this, he purchased a 64-input Soundcraft Vi6 digital console from Nordic Rentals (sourced through LydRommet, Harman’s Denmark distributor) — a decision which he described as “straightforward”. For in terms of workflow, he and sound design colleague Karsten Wolstad had also been involved in the procurement of the theatre’s two Studer Vista 5’s (which use the full Vistonics interface, similar to the Vistonics II interface as fitted on the Vi6), while the Opera House also has a Vista 8 as its FOH desk.

The endorsement of the Vi6 was further boosted by the arrival of the new V4.0 software, which provided major advantages, he said. “I was a little nervous because the update arrived in the middle of rehearsals — but I had no need to worry as the upload procedure was very simple; it has given us snapshot crossfades on all parameters and smoothes out the cue shift to give a neat transition.”

He added, “I love the Vistonics software and interface and the Vi6 is great for live production work. In terms of sound quality and ergonomics the desk sounds so much better and it’s easy and fast to generate your own configuration — there’s no comparison.”

One attribute that he draws on heavily is the ‘scope’ function. “I find it’s really useful to cope with the overlapping cues of orchestra and spoken words.”

In addition to using snapshot recalls to crossfade smooth transitions from one setting to the next — critical to a show such as this — with the new operating software Jonas has also been able to benefit from user-configurable fader layers, enabling him to map out his own channels on any of three user layers so that a combination of different inputs can be placed on one layer (as opposed to the standard set of sequential channels on the three fixed layers). The five main output fader layers may also be customised in a similar way while the ability to assign output busses to the channel faders for immediate control, makes access to the bus masters much faster — all vital attributes in a complex theatre show.

The Three Musketeers production has been running QLab as show controller

Another new function of V4.0 allows all 30 bands of premium BSS EQ to be ‘condensed’ onto eight faders, to save operating space and allow access to input channels while working on output EQ.

The Three Musketeers production has been running QLab as show controller to change the snapshots on the Vi6 desk, and for playback of the multichannel sound effects.

Additionally, the virtual layers he has experienced on most digital consoles — for changing fader banks or adjusting EQ or aux send levels etc — can be confusing for operators and detrimental to achieving a fast workflow. But this was not the case with the Vi6. “There has not been one single issue and we feel entirely safe with it,” he says.

A reverb system around the 3,600 seats gives additional ambience

A reverb system around the 3,600 seats gives additional ambience and dimension achieved by the Vi6’s onboard Lexicon FX and reproduced with coaxial point source speakers surrounding the audience. All the processing is done in the Vi6, without the need for any outboard FX.

Other features that the FOH engineer has needed to call in is the console’s talkback system since the orchestra is located in a cellar, buried right under the stage. “Imagine a WW2 concrete bunker,” he says. “Also it’s 100m away from the mix position.”

Production is using an optical fibre system to cover the long distance without the need for extenders but Jonas Vest admits that “after dragging fibre through small canals” it was a relief to get everything connected up and operational.

Although there will be no multi-tracking of this show, one recent classic drama did take a MADI split between the Vista 5 at one end and a Vi6 at the other, which was rented in.

But now the Royal Theatre has its own Vi6, and on conclusion of the present production, it is expected to be deployed on other outdoor productions, including concerts and ballet.