The event was to celebrate LCGC’s 30th anniversary—with a 3-day series of performance and workshops at London’s South Bank over the Bank Holiday weekend. The highlight was the concert at the Royal Festival Hall on the Sunday, and since this was being multi-tracked for a live album and DVD, recording engineer Simon Changer also had a third, remote 96-channel Vi6, isolated in the back control room.

In order to beat the previous record of 1,138 voices singing together in concert conditions, LCGC invited 30 other gospel choirs from across Europe to participate, so that the front tier stalls of the hall also became a performance area for the extended choir (leaving the audience to occupy the balcony/under-balcony seats and upper tiers). The show included X Factor runner-up Jahmene Douglas and Magic FM DJ Angie Greaves — and the existing record was broken thanks to an ensemble of 1169 vocalists performing simultaneously.

All the sound equipment was provided by Richard Nowell Sound Systems (RNSS), who have also installed a series of Soundcraft Vi series digital desks into the South Bank venues. The choice by Williams and Bell to use the Vi6’s was a no-brainer as both are staunch devotees of the platform, and have previously used this winning combination on tour with TinieTempah.

“In fact it was Nikoma who first introduced me to the Vi6,” exclaimed the FOH engineer. “Since then I’ve become a Soundcraft man through and through.”

With a strong background in church music, he had been contacted by the Choir “because they knew I had an understanding of their requirements.” He started out with a minor role back in 2010 before choir principle, Rev Bazil Meade, earmarked him for the lead role for this project.

While the choir itself, directed by Becky Thomas, features 50 singers, the prospect of micing up nearly 1200 vocalists created a number of logistical pressures as he set about providing a large inventory of industry standard close and ambient/overhead mics from the RNSS inventory. 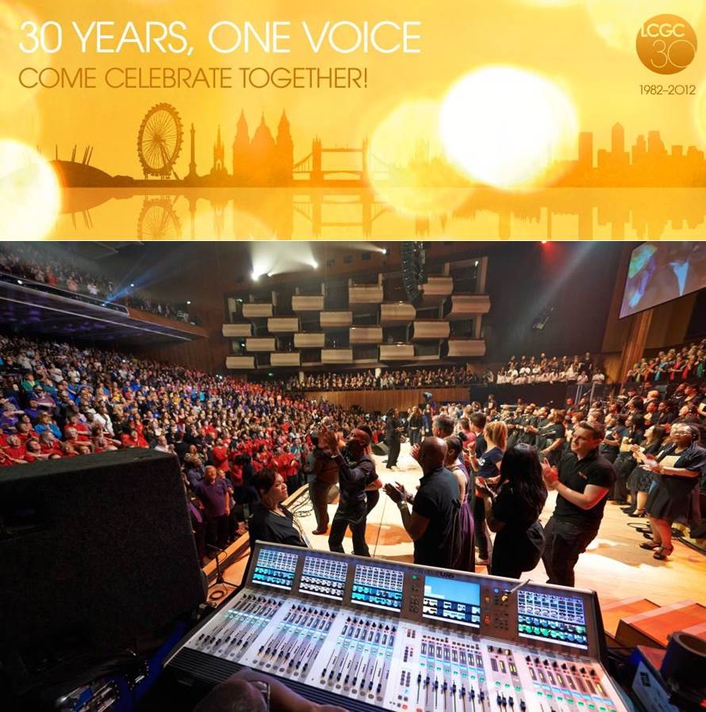 Raphael, who also acted as overall technical adviser, explained the challenge he faced in compacting his line inputs. “First of all I put together a complete list of what could happen in a perfect world; we started at 150ch consisting of band, acoustic section and vocals, with 40 direct mics, and a further 48 dotted around the hall. But closer to the time I reined it in and made it more realistic in keeping with the 96ch desk count, with nine direct mics for the main members of the choir and 12 large diaphragm mics for the remainder. These are dotted around the stage for the choir to look more artistic.”

He ended up filling his Vi6 to capacity with 30 band and 21 LCGC mics, plus four radio and 24 mics for the extended choir, eight ambient mics within the room and some playback tracks from the hard disc recorder.

“What I like about the Vi series is ultimately the sound, which is clear, crisp and clean.  The gain structure allows you enough headroom, in a sense the more you put in the more it gives out.”

“I also like the usability — it’s very easy to move around on and because of the Vistonics [interface] each screen is independent and so you can do two things at once — it makes things flexible.”

With the channel count that was required to handle the recording workflow of 96ch to a MADI device, he had to think carefully about his card configuration. “To get all 96 ins and 96 outs I had to swop some of the cards to get more MADI outs,” he explained. 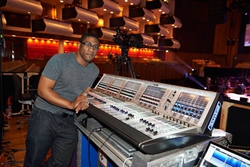 However, after considering his dilemma, Raphael acknowledged with a smile, “Nikoma probably had it tougher than me, mixing monitors down at the stage.”

The monitor engineer himself commented, “The Vi6 is always my desk of choice; there are other great desks out there but I can configure and use the Vi with my eyes closed, often getting 80% of the mix sorted via the offline software before even switching the desk on. It sounds amazing too!

“The ability to configure the show offline really helped on this occasion due to the channel count. I was using every input and output, seeing 64 lines from stage then 12 return lines from FOH, as well as my effect returns and local inputs. But as I could configure the console on the train to rehearsals it saved a lot of time, allowing the band to get on with what they needed to do.”

The final word came from Musical Director/Production Manager, Ayo Oyerinde. “The Soundcraft Vi6 was the central hub that enabled us to break the world record for the largest choir ever. From FOH, monitors to multi-track recording, the Vi6 took care of it all with the highest quality sound.”

The event was promoted by LCGC with MVLS Music.