.
A massive spiritual convention, in which 350,0000 worshippers descended on the Indian city of Jalandhar, in the state of Punjab, over three days, saw the audio relayed over the vast site using an Optocore network, designed and supplied by the production company SOUND.COM.

Using Optocore’s 2.14 protocol in a ring topology, and a unique combination of single- and multi-mode fibre they were able to deliver the signal digitally over the large coverage area. 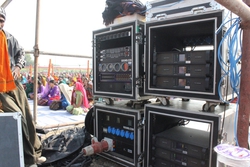 Warren Dsouza’s Mumbai-based live event production company has long been an advanced exponent of Optocore technology, exploiting large systems for events including the 2010 Commonwealth Games in Delhi and The Oman Tattoo in Muscat. For this mega peace rally, called the Divya Jyoti Jagriti Sansthan (DSM 2012), SOUND.COM. was selected based on its excellent reputation.

“The organisers first needed the reassurance that we could deliver, and after we had walked the field 2,000 feet from the main stage to see how far and wide we needed to cover the audio, we realised that with Optocore control and digital transport there would be no problem. With solid networking, extensive audio processing and superlative measurement this was just another day in the office,” said Dsouza.

Fielding a top tier crew, SOUND.COM designed the system on an entire digital audio transport network utilising proven and reliable Optocore devices. “This provided the solid foundation and backbone of this project’s success, assisted by Dolby Lake processors that handled our delay and EQ over the large distances,” reports SOUND.COM’s MD. A redundant analogue back-up was provided as a precaution.

The PA system, consisting primarily of JBL VerTec, comprised a total of ten sound towers all at an equal height of 48ft evenly distributed over a distance of 2000ft, with an array length of 12 boxes each. Warren Dsouza and SOUND.COM chief engineer, Sunil Karanjikar painstakingly measured each stack to ensure accurate delay measurements over the huge distances.

Each loudspeaker tower was assigned to an OptoRack, which distributed the signal and enabled local control. The immediate OptoRacks were linked to each other by Tactical Multi-Mode fibre cables and the redundant loop was closed by a 1.2 Km Single-Mode fibre cable — from the last delay stack back to FOH. “This is an outstanding feature of Optocore to be able to use a combination of Single- and Multi-Mode devices on the same unit, providing immense flexibility on projects like this,” notes Dsouza.

“Optocore has given us an extremely robust and secure way of transporting broadcast quality audio on all our projects and the proficiency with which it does this really makes the task easy. I am really looking forward to the future and many more projects with Optocore,” says Sunil Karanjikar.

The event itself was composed of prayers, discourses and devotional music with the highlight being the rich baritone voice belonging to His Holiness Shri Ashutosh Maharaj ji. “The moment everyone was waiting for was to hear his speech over the PA system,” reports Warren Dsouza. “At that point we knew it was it was ‘mission accomplished’.”