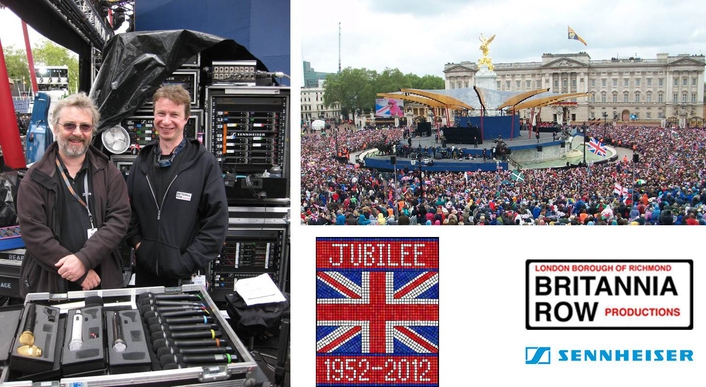 Andrew Lillywhite and Tony Scaife of Britannia Row at the Diamond Jubilee
The spectacular culmination to a weekend of celebration for the Queen’s Diamond Jubilee was the concert that was staged at the Queen Victoria Memorial, against the backdrop of Buckingham Palace. Organised by Gary Barlow – and, incidentally, earning him an OBE – it featured some of the biggest names of the world of entertainment, from Shirley Bassey and Tom Jones, to Elton John, Paul McCartney, Kylie Minogue and Cliff Richard. Sennheiser UK, renowned for its unwavering support at such spectaculars, was on hand throughout with expertise and equipment that ensured an event that was, literally, fit for a Queen.

Also synonymous with events of such scale and importance is Britannia Row Productions, which supplied all audio requirements for the concert. Their inventory of Sennheiser equipment included SKM 5200 MK II microphones with KK 105 heads for the presenters and 2000 series IEMs for all on stage IEMs and Sennheiser UK’s Mark Saunders, Andrew Lillywhite and Tim Sherratt were on hand to assist throughout.

“We had an A-B monitor console setup for guest artist and musicians. Each of these had seven channels of Sennheiser 2000 IEM on them we then had a house band console mixing the nine-piece house band, backing vocals and the orchestra, which used a further 14 channel Sennheiser 2000 IEM system. There were a further three consoles out front - one orchestra, one house band and one presenter. Elton John and Stevie Wonder used a separate dedicated console package supplied by Britannia Row and also utilised the 28 channels of IEMs available for 10 channels for Stevie and six for Elton.

“At an event like this the sheer quantity of RF, both on stage and around the site, being used by world broadcasters means management of RF is a huge task and the equipment we use needs to be solid in its performance and coverage. Also the stage was very large, so a traditional pair of directional antennas did not provide sufficient coverage, meaning multiple antennas along with headamps and filters to compensate for the large cable runs.

“All of the RF was handled by Tony Scaife alongside Tim and Andrew from Sennheiser. Having Sennheiser onsite meant, as well having back up and support for their equipment, we also had a vast wealth of RF knowledge and backup, which is integral to the smooth running of a show like this with so much going - and they make it look so easy.”

"When we were asked to assist Brit Row with the Diamond Jubilee concert and carry on the tradition of working on these events (Sennheiser were on site back in 2002 for the |Golden Jubilee) I happily agreed,” adds Mark Saunders. “The gig turned into one of the most technically testing and RF heavy events of this type - and was possibly the highest profile event we have been involved in since the days of Live 8 and Live Earth,

“Alongside our long relationship with Brit Row, this show also allowed us to work with many artists, including Kylie, Annie Lennox and Gary Barlow, who have had a long associations with Sennheiser and Neumann, as well as some of the newer generation of artists using Sennheiser such as Ed Sheeran and Jessie J."

“Sennheiser has been supporting us at major events for over a decade now and this was probably our greatest challenge together in that time,” concludes Brit Row’s Bryan Grant. “Mark, Tim and Andrew worked as part of our crew on stage and helped to deliver a flawless show. The equipment as always delivered superbly.”