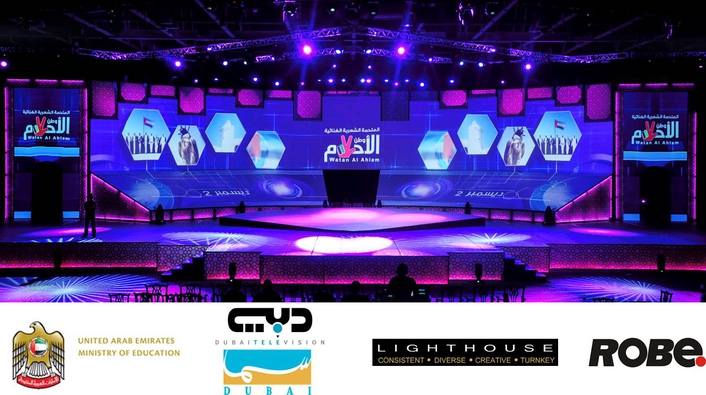 .
UAE based Lighting Designer Terry Miranda specified over 120 Robe fixtures to realise an eye-catching design for “Watan Al Ahlam” (Country of Dreams), a musical performance staged by the UAE Ministry of Education at the Dubai World Trade Centre.

Students from schools across the UAE participated in the event directed by a team of Emirati professionals. This enabled them to showcase their talents in front of an invitation-only audience comprising high ranking government officials and locals.
The Robe lights – along with the complete technical production - were all supplied by Dubai based Lighthouse Productions of which Miranda is also a Founder / Director.  Lighthouse has a large rental stock of Robe, and Miranda is one of the leading LDs in the country, working on a diverse selection of productions.

The stage design was based on a futuristic theme, with video projection mapped to a large backdrop setting the scene with dramatic visuals. This set up was also Miranda’s starting point for the lighting.
The trussing lines mirrored the wedged shaped stage arranged in triplicate decreasing perspective, with each run of trussing a slightly different size all adding to the depth and perceived height of the performance space.

Miranda especially likes the MMX WashBeams, a relatively new addition to Lighthouse’s hire stock. He saw the WashBeam in action for the first time at the 2013 PALME Dubai exhibition, and placed an order on the spot!
Robe’s Middle East office headed by ME Regional Sales Manager Elie Battah then ensured that the new units were delivered to Lighthouse in super-quick time for this show. 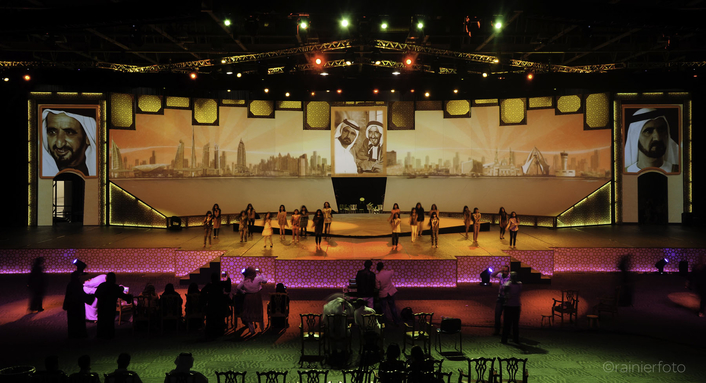 They were used as beams and washes as well as shuttered down tightly for specific scenes. They were also used for spotting and gobo work.
“It’s the first time I have been able to achieve so much from one fixture,” Miranda declares. “They are hugely versatile and I’m delighted with them,” he enthused, adding “They are an absolute dream to work with – so multi-functional and so light in weight!”

In fact, he could easily envision producing an entire lighting design with MMX WashBeams as the designer can effortlessly move between a spot, a wash or a beam fixture and achieve so much more dynamics … with fewer lights.
He was impressed with the intensity, the beam shaping and the shutter framing, which allowed artists to be pinpointed almost anywhere on the stage.
His only regret was “Not having enough MMX WashBeams on the show!”

The lights were programmed by Adrian Guzmann using Jands Vista T2 and L5 consoles. The show’s Production and Video Content Designers were Lighthouse’s Mohammad Tameem & Rizwan Zafar.
The operetta was televised live on Dubai TV & Sama Dubai and attended by His Highness Shaikh Mohammed bin Rashid Al Maktoum, Vice-President and Prime Minister of the UAE and Ruler of Dubai.

Lighthouse subsequently received an Award from the Ministry of Education for their ‘Outstanding work’ on this event.
Miranda and Lighthouse’s relationship with Robe dates back to 2003. He reckons that investing in the Robe brand has helped Lighthouse maintain its reputation for award winning lighting and production designs over that time by “Supporting us with outstanding products and service”.