Renegade on A Mission at Tate Modern

.
Nick Gray of London based creative lighting and visual design practice Renegade produced a raw and uncompromising lighting installation in the Turbine Hall of the world-famous Tate Modern art gallery in London for brand and live communications agency Mission, who were celebrating their tenth anniversary with a special event.

The Tate Modern - formally Bankside Power Station - is among Gray’s favourite spaces to light in the city. He has also worked on several events and projects for Mission and is familiar with the scope and style of their work which give him plenty of ideas about the right ambience to create in.

“I love highlighting the room’s imposing industrial architecture - 152 metres long and 35 metres high - and bringing it into a new dimension and context using the full height and scale. Most visitors don’t immediately notice a lot of the detail, so lighting the space is a big chance to make it almost into an art exhibit in its own right for the evening,” he comments.

Gray also based his design on multiples of 10 – for Mission’s 10 years. “I thought introducing repetitive number sequences was a subtle and thoughtful way to reinforce the theme of the event,” explains Gray.

This proved an ideal strategy. His other mission for lighting the space differently was to preserve and accentuate the overall site-lines rather than losing them for the sake of ‘standard’ lighting effects.

He also decided to use entirely white light.

Going monochrome and using different temperatures of white added a serious edge to the atmospherics. “White and dark – just like the stark beauty of black-and-white images – is a good way to engage people,” he explains.

Above the entrance ramp door to the Turbine Hall he positioned a 4K Molebeam – a very large blocky lightsource giving off an apocalyptic blast of lumens to raise the levels of anticipation and excitement as guests entered.

On the bridge at the front of the Hall up high he positioned 10 Clay Paky Sharpies, representing 10 candlesticks, shooting directly up into the air. They remained in this position until the end of the event, when they dropped down to illuminate the way out, in the process creating a ceiling of light for the exit.

Gray also specified a Panasonic 10K projector which was positioned to project the client’s show-reel above the bridge. Either side of this – to keep it dark and moody – he positioned two bars of ACLs plus some smoke machines and fans so the ACL beams could dramatically pierce the smoke.

At the far end of the Turbine Hall, a 14 metre square custom bouncy castle was installed for the guests’ enjoyment, and this was illuminated with eight Sharpie Washes positioned behind it on the floor above.

Up high, rigged on bars below the room’s main structural RSJs trimmed at around 10 metres all the way down the hall, were a series of lighting pipes rigged with a mixture of Vari*Lite 3500 moving lights and ETC Source Four Profiles.

Getting the fixtures at a good height and using  minimal additional rigging infrastructure - so they are harmonious with the style and feel of the Turbine Hall - is very much Gray’s trademark style for lighting this venue. 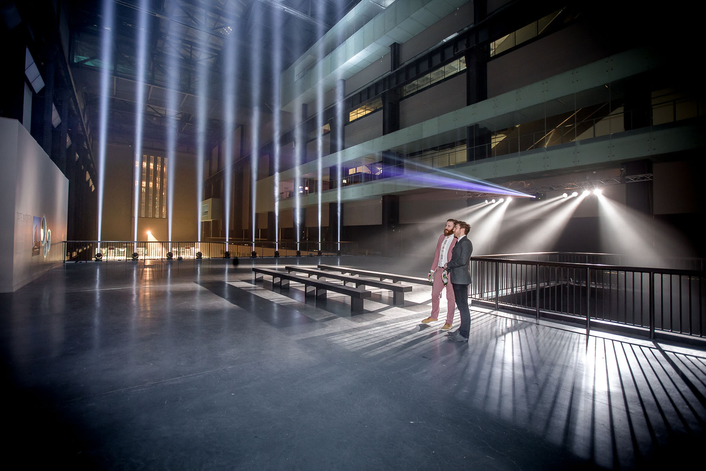 The Source Fours were used to highlight the various seating areas below while the V*Ls created ambient washes with atmospheric well-defined cones of light.

Down below, on the Hall floor were a series of LED up-lighters, some skimming up the walls and others picking out the RSJs themselves and the striking steel grid-work around the room.

All lighting equipment was sourced and provided by Renegade, and Lighting Operator for the event was Rob Gawler using one of Renegade’s Hog 4 consoles.